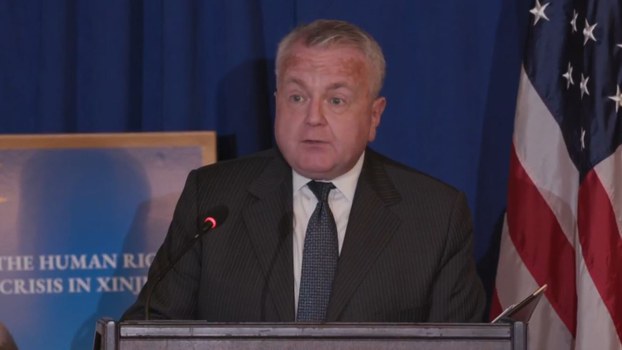 A still from a video of US Deputy Secretary of State John J Sullivan addressing an event on the situation in Xinjiang on the side lines of the United Nations General Assembly in New York, Sept. 24, 2019.

Speaking at an event on the situation in the XUAR on the side lines of the United Nations General Assembly in New York, U.S. Deputy Secretary of State John J. Sullivan said that the U.N. had failed to hold China to account over its policies in the region, where authorities are believed to have held up to 1.5 million Uyghurs and other Muslim ethnic minorities accused of harboring “strong religious views” and “politically incorrect” ideas since April 2017.

In June, Vladimir Voronkov, the U.N.’s under-secretary general for counter-terrorism, traveled to the XUAR on an official visit, drawing condemnation from Washington, which said the trip risks lending credence to China’s claims that detentions in the region are related to a counter-terrorism issue, rather than a violation of human rights.

“Instead of bolstering the U.N.’s moral authority by resisting Beijing’s cynical offer, we witnessed the erosion of U.N. leadership and a blow to the reputation and credibility of a body we should instead look to as a clear voice of conscience,” Sullivan said, adding “this must not happen again.”

“We call on the U.N. to uphold its own values and carry out the many responsibilities we have entrusted to it. They U.N. must seek the immediate, unhindered, and unmonitored access to Xinjiang for the U.N. High Commissioner for Human Rights … We urge the U.N. to investigate and closely monitor China’s human rights abuses, including the repression of religious freedom and belief.”

Other government should join in demanding that China end its “horrific campaign of repression” in the XUAR, Sullivan said at the event, during which survivors of the internment camps told their stories to an audience that included a delegation from the Organization of Islamic Cooperation, which represents 57 Muslim-majority U.N. member states.

In addition to the camps, Sullivan highlighted “pervasive, high-tech surveillance” and the involuntary collection of personal data in the XUAR—which he called “nothing short of Orwellian”—Beijing’s “extreme hostility to all faiths,” and the ruling Communist Party’s use of counterterrorism as a pretext for its repressive campaign in the region.

“Beijing wrongly insists that its actions are undertaken in a humane manner,” Sullivan said, noting that China has hosted “Potemkin tours in a failed attempt to prove it.”

“But if there were nothing to hide, diplomats and independent investigators would be allowed to travel freely throughout Xinjiang, and for that matter, Tibet. We must ask ourselves: what is the Chinese Communist Party afraid of? What are they trying to hide?”

Zumuret Dawut, a Uyghur woman who was held at a camp in the XUAR from April to June of 2017 and relocated to the U.S. in April this year, told attendees that she was regularly beaten and force-fed medication by guards that made her dizzy during her incarceration, and upon her release was made to renounce her Muslim faith and live with Han Chinese “family members” who monitored her behavior.

Rishat Abbas, whose sister Gulshan  Abbas was taken to a camp in the XUAR in September 2018, told attendees that he believes she was targeted because he had spoken out about human rights abuses in the region.

“My family’s story is not unique—almost every Uyghur in the diaspora has friends and family who are detained, some by the dozens,” he said.

In July, after China’s ambassador to the U.N. invited its human rights czar Michelle Bachelet to visit the XUAR to “see for herself” what he called “education training centers” in the region, the Office of the United Nations High Commissioner for Human Rights (OHCHR) told RFA that she would not accept unless given access to the camps on her own terms.

Sullivan’s comments came as Antonio Guterres, the secretary general of the United Nations, is facing criticism from international rights groups for failing to speak out publicly against China’s mass detentions of Uyghur’s in the XUAR.

In a letter to Guterres dated Sept. 17, five rights groups said that Guterres’ preferred approach to the Chinese government on the XUAR has been “to conduct private diplomacy,” but noted that Beijing only answers for its actions after intense public pressure, and called on him to urge Chinese authorities to grant Bachelet and U.N. experts “prompt and unimpeded access” to the camps.

Guterres last week rejected claims that he has not condemned Beijing’s mass incarcerations in the XUAR, saying “I don’t think anyone has been more persistent and more clear in talking to the Chinese authorities in relation to this issue than myself,” and dismissing the suggestion that he had “only done discreet diplomacy.”

Kelley Currie, head of the Office of Global Criminal Justice at the U.S. State Department, told RFA’s Uyghur Service after Tuesday’s event that the U.S. had decided to “use the events here at the U.N. General Assembly to shine a bright light on this, in particular on the U.N.’s failure to speak out and really do anything about this situation.”

“We’re looking at how we can raise this issue through multilateral venues because we think this is a problem the whole world needs to be paying attention to, not just the United States,” she said.

“We would just like to see the U.N. stand up for its own values in this situation, take its human rights commitments seriously, and actually speak out to protect these vulnerable populations.”

Karen Smith, the U.N.’s Special Adviser on Responsibility to Protect, agreed that the U.N. needs to be granted access to the XUAR so that it can address reports of rights abuses there in a clearer manner.

“It’s very, very important for the U.N. experts—particularly OHCHR—to be allowed into China so that an independent assessment can be done, so that afterwards, recommendations can be made using the existing U.N. mechanisms to address this crisis,” she said.

At the Ministerial to Advance Religious Freedom in Washington in July, U.S. Secretary of State Mike Pompeo called the internment camps in the XUAR “one of the worst human rights crises of our time” and “truly the stain of the century.”

U.S. Vice President Mike Pence also slammed the camps “where [Uyghurs] endure around-the-clock brainwashing” and survivors have described their experience as “a deliberate attempt by Beijing to strangle Uyghur culture and stamp out the Muslim faith.”

U.S. Ambassador-at-Large for International Religious Freedom Sam Brownback, who moderated a panel at Tuesday’s event, recently told RFA in an interview that countries around the world must speak out on the Uyghur camps, or risk emboldening China and other authoritarian regimes.

The U.S. Senate earlier this month unanimously passed the first legislation by any nation in response to human rights abuses against ethnic Uyghurs in the XUAR, which would authorize regular monitoring of the situation by various government bodies.

Because the US has never used counter-terrorism as a pretext for restricting people’s rights. Sorry the UN believes it’s own experts and not some US-backed propaganda machine with too much bias and too little proof.