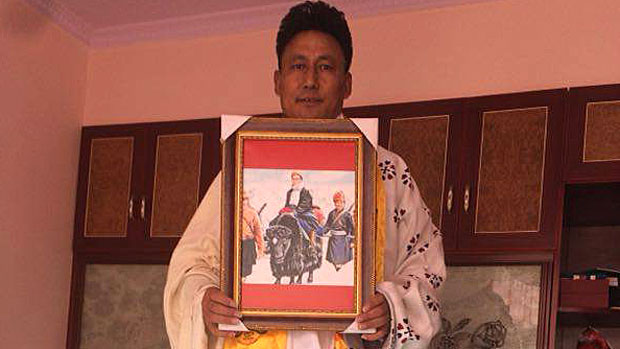 Lodroe Gyatso, also known as Sogkar Lodroe, is shown in an undated photo.
Photo provided by an RFA listener

A Tibetan man previously jailed for more than 20 years for homicide and political activism is believed to have disappeared again into police custody, this time after staging a protest in Tibet’s capital Lhasa against Chinese rule in Tibetan areas, sources say.

“It is thought that he was detained for raising political slogans, but no one can confirm what he shouted or exactly where this happened,” RFA’s source said, speaking on condition of anonymity.

“He had reportedly planned to hold a peaceful protest in Lhasa calling for the return to Tibet of [exiled spiritual leader] the Dalai Lama and for world peace through global demilitarization,” the source said, adding that Gyatso had especially wanted Tibet to be declared a “zone of peace.”

On Tuesday, the India-based Tibet Times confirmed Gyatso’s disappearance, saying the former prisoner had “vanished after he staged a peaceful protest in front of the Potala Palace in Lhasa on Jan. 28, 2018.”

“His family and relatives fear that the Chinese may have rearrested him because of the protest,” the Times said in its Jan. 30 report.

Convicted in 1991 of killing a man in a fight, Gyatso spent 21 years behind bars, with his original 15-year sentence extended for engaging in political activism while incarcerated, sources told RFA in earlier reports.

After being released under police supervision in May 2013, Gyatso criticized what he called Beijing’s “oppressive policies” in some of the eastern counties of Tibet’s Nagchu prefecture, one source said, adding that Gyatso had especially pointed to Chinese treatment of Tibetans “that was contrary to national and international standards of law.”

He was also critical of local Chinese authorities’ insistence that Tibetans wear traditional clothing lined with fur, a practice discouraged by the Dalai Lama and abandoned by local Tibetans some time before, the source said.

Jailed again, Gyatso was beaten and tortured in detention, and was finally released from prison in July 2016 after vowing to other inmates that he would someday stage a peaceful protest in Lhasa after being freed, RFA’s exile source said on Tuesday.

Sporadic demonstrations challenging Beijing’s rule have continued in Tibetan-populated areas of China since widespread protests swept the region in 2008.