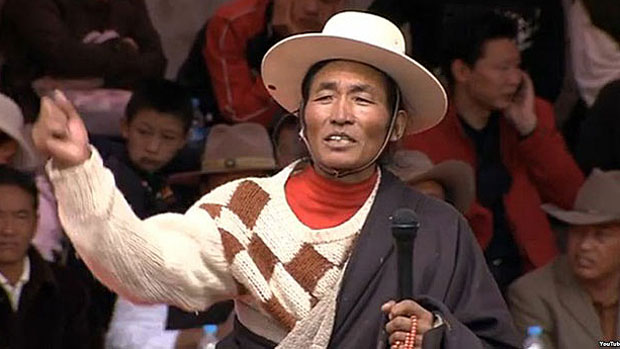 Runggye Adrak calls for the return of the Dalai Lama to Tibet, Aug. 1, 2007.
File Photo

A popular Tibetan horse race festival held in July in Lithang in western China’s Sichuan province opened this year to small crowds, with Chinese officials and students making up most of those attending, Tibetan sources said.

Only a few Tibetans were allowed onto the festival grounds, a local source told RFA’s Tibetan Service this week.

“And those who came in to watch were put under strict restrictions, such as having to show their identity cards and signing documents pledging not to engage in any protests,” RFA’s source said, speaking on condition of anonymity.

“Former political prisoners and Tibetans considered suspicious were kept constantly under strict Chinese surveillance at the festival,” the source said.

“This year’s festival saw only a huge presence of Chinese officials, organizers and participants, and some students,” said Geshe Jamyang Nyima, a Lithang native now living in exile.

“Not many Tibetans were allowed to witness the festival.”

Chinese officials selected a smaller field for this year’s festival than the larger festival ground formerly used so that they could more closely watch the few Tibetans who attended, Geshe Nyima said.

“This horse race festival organized by the Sichuan Cultural and Tourism Center was nothing more than an exercise in political propaganda,” he said.

Closed down after protest

Lithang’s well-known and popular horse race festival was banned from 2007-2019 following the Aug. 1, 2007 protest by a Tibetan nomad named Runggye Adrak, who took over the stage to address the large crowd through a microphone, urging China to allow exiled spiritual leader the Dalai Lama to return to Tibet.

A smaller horse race was held in Lithang in 2018 and was previously reported in error to have been the first opening of the traditional, larger race held each year before the ban went into effect. Another small race was held in 2019.

Adrak’s detention following his 2007 protest drew hundreds of Tibetan protesters into police and government office compounds in Lithang, prompting police at one point to threaten to shoot into the crowd.

Authorities managed to negotiate an uneasy truce, but security forces then converged on Lithang in large numbers, and local Tibetan Communist Party officials in the area were replaced by Han Chinese.

Sentenced in November 2007 to an eight-year prison term for “inciting to split the country” and “subverting state power,” Adrak was released in July 2015.

Though China in recent years has sometimes allowed the holding of Tibetan festivals as a sign of stability and “progress” in Tibetan areas, security forces often monitor and sometimes close down events involving large crowds, fearing spontaneous protests against Chinese rule.