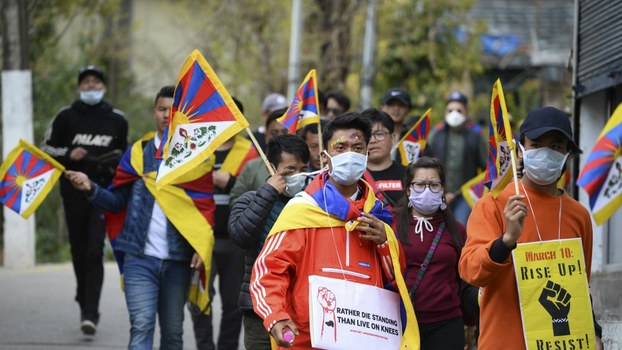 Tibetans living in exile wear protective masks in protest march from McLeod Ganj to Dharamshala to mark the 61st anniversary of the 1959 Tibetan Uprising, in McLeod Ganj, March 10, 2020.

A Tibetan man living in India died this week of coronavirus shortly after returning from a visit to the U.S. and was quickly cremated, with his wife and other persons he had recently been contact with now held in medical isolation, Indian health officials said.

Tenzin Choephel, 69, was diagnosed with COVID-19 following preliminary tests given at the Tanda Medical College in the Kangra district of northwestern India’s Himachal Pradesh state on March 23, and died the next day, authorities in Kangra said.

Himachal Pradesh’s hill town of Dharamsala, where Choephel had his home, is now on lockdown, with Tibetan residents forbidden to leave their homes this week in an effort to contain the possible spread of infection, sources said.

Choephel had returned with his wife to India on March 15, and stayed for five days in a hotel at the Samye Ling Tibetan Settlement in Delhi and then traveled by taxi to McLeod Ganj, near Dharamsala, the seat of the Tibetan government in exile, arriving on March 21.

“As his health deteriorated, he went to the Balaji Hospital [in Kangra], from where he was sent to Tanda Hospital, where he passed away,” official sources said, adding, “Choephel’s body was cremated as per the guidelines of the Kangra medical officers.”

Test swabs have now been sent to the Institute of Virology in Pune city, in the western Indian state of Maharashtra, for a confirmation of the initial diagnosis, but for now Choephel’s case is being listed as a coronavirus death, authorities said.

Kangra district authorities have meanwhile informed Tibet’s Dharamsala-based government in exile, the Central Tibetan Administration (CTA), of Choephel’s death, asking that anyone recently in contact with Choephel, formerly an officer with the CTA’s Election Commission, be held for testing.

All those he had come in contact with, including the taxi driver and staff at the hotel in Delhi were he had stayed are now being held in medical isolation, Tibetan exile leader Sikyong Lobsang Sangay said ths week.

“His wife, child, and other companions are meanwhile being kept under medical isolation at a Tibetan reception center in Dharamsala,” Sangay said.

“In consultation with the Deputy Commissioner of Kangra district, Tibetans [in Dharamsala] are not allowed to leave their houses for three days, and Dharamsala itself remains under lockdown to prevent the spread of the coronavirus.”
Sangay meanwhile urged Tibetans to take extra precautions to avoid infection and to avoid unnecessary travel.

In a statement, the CTA said this week that the exile government has set up a special task force committee to monitor and halt the spread of infections and are holding close discussions on daily developments. The committee includes two personal physicians of Tibetan spiritual leader the Dalai Lama, and the Dalai Lama’s private office is now closed, CTA said.

Northwestern India’s state of Himachal Pradesh also remains under a lockdown imposed on March 23, with all government offices in the state closed for three days beginning the next day, state authorities said.

Tibetan settlements, monasteries, and schools in other parts of India are meanwhile taking measures to block the spread of the virus, with Tibetan NGOs in Dehra Dun screening individuals for fever and other symptoms of infection, and Tibetan refugees in the country’s south, where no cases have been reported, urged to stay at home.