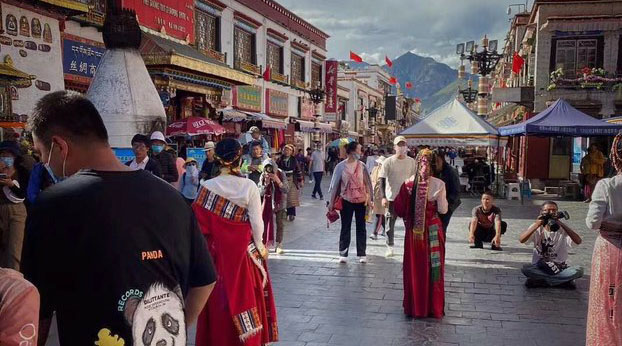 Chinese tourists are pouring into Tibet’s regional capital Lhasa in large numbers, crowding religious sites barred to many Tibetans as the city opens to outside visitors after the easing of coronavirus prevention restrictions, sources in Lhasa say

Arrivals from China have quadrupled since fears have eased over the spread of COVID-19, one local source told RFA’s Tibetan Service, saying that around 4,000 visit Lhasa’s Potala Palace, winter home of exiled Tibetan spiritual leader the Dalai Lama, every day.

“This does great harm to Tibet’s heritage,” RFA’s source said, speaking on condition of anonymity. “Besides, Tibetans visiting from areas outside Lhasa are highly restricted and are treated differently.”

“Tibetans in Tibet are complaining that their culture is becoming a show piece for Chinese tourists, while the Tibetans themselves are denied the opportunity to preserve and cherish their traditions,” he said.

Chinese tourists are freely allowed to visit the Tsuklhakhang, the site of Lhasa’s famous Jokhang Temple, while Tibetan visitors are thoroughly screened and government workers, retirees, and school students are completely banned from entering, the source said.

Tibetan students are meanwhile not allowed to visit local monasteries even during their summer break, the source said.

“Tibetan officials, government workers, retirees, and students are strictly banned from visiting sacred Tibetan monasteries in Lhasa. However, the Chinese tourists are warmly welcomed to the monasteries with special access and privileges extended to them,” he said.

Chinese tourists also spread litter in the places they visit and are insensitive to local culture and traditions, angering local residents who frequently complain, another source said, also speaking on condition he not be named.

“The Chinese visitors smoke in holy sites like the central Barkhor area and the Potala Palace. They litter the ground with empty bottles and throw waste everywhere,” the source said.

“When Tibetans confront them and argue with them, the Chinese police side with the Chinese tourists and blame the Tibetans for causing racial disharmony, which lands them in trouble,” he said.

“The Chinese arriving in Lhasa are not observing social distancing and some are insensitive to Tibetan religious sentiments by walking in the wrong direction around the Barkhor area and posing for photos where it is forbidden,” he said.

“The Chinese tourists are becoming a nuisance to Tibetan pilgrims."

On July 22, Tibet’s Communist Party Secretary Wu Yingjie visited Tibet’s Tourism Bureau, urging it to be “more efficient” in responding to the needs of mainland Chinese visitors, and to restore Tibet’s tourism industry to its pre- COVID-19 status, another source told RFA.

He then strolled through Lhasa markets, greeting the Chinese tourists that he saw, the source said.

“Lhasa and other places in Tibet are becoming important tourist attractions for Chinese visitors, and this is having an adverse impact on the Tibetan people’s way of life,” the source said, adding, “Their daily rituals, cultural traditions, and customs are becoming marginalized.”

“Many Tibetans are concerned that younger Tibetans are now growing up in an environment where they have become separated from their culture, and that their culture is becoming increasingly irrelevant to them.”

Lhasa meanwhile remains under tight police surveillance, with CCTV cameras mounted at the corners of every major street, the source said.

Reported by Kalden Lodoe and Lhuboom for RFA’s Tibetan Service. Translated by Dorjee Damul. Written in English by Richard Finney.

This is what happens to your country when nothing is done to repel a Chinese invasion. Many major cities across the globe are already looking similar.