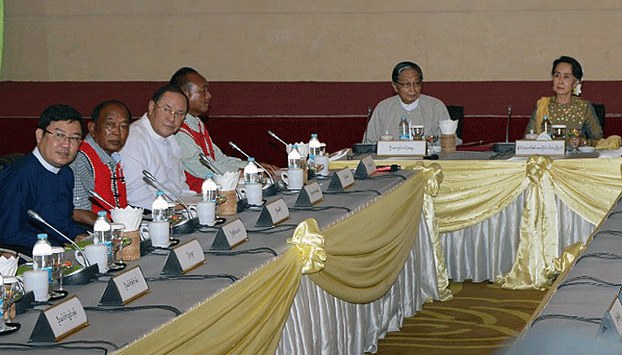 Leaders from Myanmar’s United Wa State Army (UWSA) and Mongla Army told State Counselor Aung San Suu Kyi on Friday in the capital Naypyidaw that they strongly believe the government’s upcoming Panglong Peace Conference is the only way for Myanmar to attain peace through dialogue, a government official said.

Aung San Suu Kyi, Myanmar’s de facto national leader, extended the USWA and Mongla Army, also known as the National Democratic Alliance Army (NDAA), a formal invitation to attend the conference, though they had both decided previously to participate in the peace conference, said Zaw Htay, spokesman of the President’s Office.

The UWSA—Myanmar’s largest non-state army—was one of the armed ethnic groups that refused to sign a nationwide cease-fire agreement (NCA) brokered by the former government last October.

“Both Wa and Mongla groups said that they believe in the 21-Century Panglong Peace Conference Aung San Suu Kyi is leading and support it as the means for dialogue to have peace,” Zaw Htay said.

Leaders from the two groups met with Aung San Suu Kyi, who is also chairperson of the National Reconciliation and Peace Center and the government’s Peace Dialogue Joint Committee, and military commander-in-chief Senior General Min Aung Hlaing to try to build trust prior to the conference.

They also brought with them about 100 young people whom Aung San Suu Kyi praised as future leaders, Zaw Htay said.

Next, the UWSA and Mongla Army will meet with the committee arranging the peace conference scheduled for late August to discuss how the groups will work together on the peace process, he said.

Achieving national reconciliation and peace is one of the main goals of President Htin Kyaw’s administration, according to government statements.

His efforts fell apart when he was assassinated, and ethnic rebel groups then took up arms against the central government in wars that have ground on in some cases for more than five decades.

Aung San Suu Kyi also proposed that the Wa, Mongla, and members of the United Nationalities Federal Council (UNFC), a coalition of nine ethnic rebel groups that did not sign the NCA, participate in a review of the political dialogue framework, he said.

Meanwhile, the leaders of 17 of Myanmar’s armed ethnic groups are wrapping up a four-day meeting in the town of Mai Ja Yang in Kachin state to discuss a framework for the government’s peace conference in late August, said Naw Si Pho Ra Sein, vice chairwoman of the Karen National Union (KNU), one of the participating groups.

“Because these points [that we are discussing] are important to go forward, we need to get the armed ethnic groups to agree on them,” she told RFA’s Myanmar Service.

Observers from the United Nations and China who have attended the summit have pledged to continue offering their assistance in the peace process, she said.

“The United Nations will continue to work and will extend its support and cooperation [to] all, with transparency, with the stakeholders here,” said Vijay Nambiar special adviser on Myanmar to the secretary-general.

Sun Guoxiang, China’s special envoy on Asian affairs who attended the Mai Ja Yang summit, told the online journal The Irrawaddy that China supports all forces that back internal peace in Myanmar and expects all armed ethnic groups to participate in the Panglong Peace Conference.