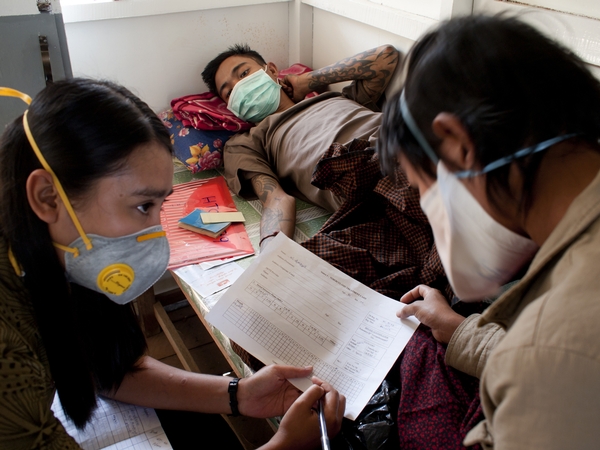 An MSF counselor meets with a woman and her husband, who is co-infected with HIV and TB, in an undated photo.
Photo courtesy of MSF/Greg Constantine

Myanmar is facing an “urgent health threat” from an alarming rate of increase in drug-resistant tuberculosis cases, with most of the cases left untreated, an international aid group warned Thursday.

A rapid improvement in treatment methods is needed to prevent the crisis from worsening, the international medical humanitarian aid group, Medecins Sans Frontieres/Doctors Without Borders (MSF), said at the start of a two-day symposium it co-hosted with Myanmar’s Ministry of Health and the World Health Organisation (WHO) in Yangon, exploring new ways to accelerate nationwide care.

“Forms of tuberculosis (TB) that cannot be treated with standard drugs are presenting at an alarming rate in the country, with an estimated 8,900 people newly infected every year,” MSF said in a statement.

But despite the rapidly growing number of drug-resistant tuberculosis (DR-TB) patients, only 800 were being treated in 38 townships in Myanmar at the end of 2012, the aid group said.

“Untreated, the airborne and infectious disease is fatal. Rapid scale-up of DR-TB care is urgently needed country-wide to save lives and stem the unchecked crisis,” it said.

Around 300,000 people suffer from some form of TB in the country, where prevalence of the disease is two times the regional average and three times the global average. Myanmar is among the 22 countries with the highest TB burden in the world. 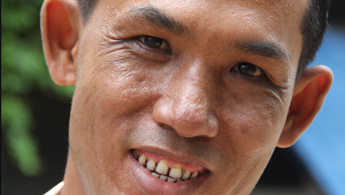 MSF said new methodology and treatments are “critical” to battling DR-TB, as current options for trying to cure the resistant form of the disease take two years and are highly toxic and expensive.

Patients must swallow up to 20 pills a day, and endure eight months of daily injections, yet only around half have a chance of being cured, MSF said, citing global statistics.

The drugs have side effects ranging from debilitating nausea, vomiting, and skin rashes to more serious side effects such as deafness, renal failure, and psychosis, it said.

Among the 300,000 people infected with TB in Myanmar, about 15,000 people are suffering from DR-TB, he told the symposium.

“Myanmar is demonstrating this leadership through its expanding DR-TB programme, yet there remains a long way to go. Strengthened partnerships and innovation is needed at all levels, national and international, to ensure effective treatment reaches all those who desperately need it.”

“The side effects from the treatment were strong and it was really difficult to manage,” said the former patient, who now works to promote awareness about the disease and provides peer support to new patients.

“I felt dizziness, pain in my buttocks from all the injections, and problems with my hearing. I felt nauseous when I smelled cooking, found myself easily getting angry, constantly weak and tired, always having diarrhea, and experiencing hallucinations.”

“A major problem for the TB control program in Myanmar is that TB patients are also infected with HIV, while the TB they suffer from is DR-TB,” she said.

“We need funding, new methods, and additional resources to tackle the problem. We also need laboratories, medicine for patients, and especially human resources to do so.”

MSF said that the TB symposium would focus on opportunities to improve treatment for DR-TB and increase cure rates through patient-centered care, new diagnostics, and new drugs, as well as ways to address the needs of marginalized patients such as prisoners and migrant workers.

The conference will conclude with a list of recommendations for new methods to combat the disease in support of the government’s plans to make DR-TB care widely available in Myanmar.

“No country can afford to ignore the human and financial cost of the global DR-TB epidemic. It’s one of the most pressing medical crises today,” Karunakara said.

“All DR-TB patients in Myanmar, and throughout the world, do not have years to wait for a chance of cure—the time to act is now.”

MSF, which began providing health care in Myanmar more than 20 years ago, set up the country’s first pilot DR-TB program in 2009 in collaboration with WHO.