'More Vaccine Scandals' Have Yet to Emerge: Chinese Lawyers 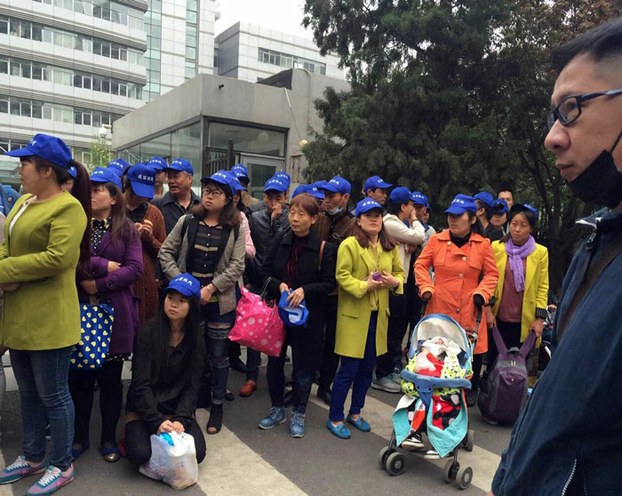 Parents of children affected by tainted vaccines gather in protest outside China's Health and Family Planning Commission in Beijing, April 2016.

Photo courtesy of a rights activist

A group of prominent Chinese lawyers has penned an open letter to the country's parliament, the National People's Congress (NPC), calling for amendments to legislation to protect children and families against tainted vaccines, warning that more scandals are waiting to happen.

Under current laws, vaccination of children is compulsory for many illnesses, but a string of health scandals involving unsafe storage of practices has left hundreds of families seeking compensation for harm done to their children.

The lawyers are calling for amendments to existing official guidelines on the management of vaccine supply chains, and on their safe storage and administration after police detained more than 130 people in connection with Shandong-based illegal vaccine sales transactions across the country in 2015.

"Since the Shandong vaccine scandal, we have gradually been researching vaccine safety ... and we have found that it is a very serious problem," letter co-author Wang Shengsheng told RFA.

"There are many other cases that have yet to emerge," Wang said. "It's possible to predict that harm and losses will occur every day in China because of this issue."

"We believe these measures are achievable, and will be effective in lowering the risks associated with vaccines," he said.

"We hope that the NPC will take note of our suggestions, and implement these preventive measures as soon as possible," Wang said.

A vaccine activist surnamed Yang said one of the biggest obstacles to winning compensation for families affected by tainted vaccines is the need to show clear proof that the vaccines caused the deaths or illnesses of the children concerned, even when suppliers have been found in breach of safety guidelines.

"It's really very hard for ordinary people to come up with this sort of evidence," Yang said. "Evidence of the link between vaccines and the deaths or disability of children can't be found."

"The government should really show a bit more willing and come to a decision regarding the victims of the tainted vaccine scandal," Yu said.

"They need a plan, and if they don't have one, we'll come up with a plan for them," he said.

The Shandong scandal first became public in April 2016, with the arrest of two businesswomen surnamed Pang in the eastern province of Shandong.

As the news broke, reports of deaths and health problems began to emerge from parents of recently vaccinated children across China.

Two pharmacists, Pang Hongwei and Sun Qi, were jailed on Jan. 24 for 19 years and six years respectively after being found guilty of "illegal business operations by the Jinan Intermediate People's Court in Shandong, but parents of children affected by the vaccines said the sentences were too lenient.

"These sentences were too light," parent Li Bao told RFA at the time. "Even the death penalty wouldn't have been too harsh."

Li, whose 16-year-old son has been left with neurological damage and permanent disability following a vaccine administered six years ago, said the government had also failed to resolve safety issues with vaccines still in circulation.

"The most important thing is the vaccines here, right? They need to seize and impound any vaccines in circulation that could harm people," Li said.

But healthcare professionals have called for a list of affected suppliers, so they can verify that their own stocks of vaccine are safe, to no avail.

Parent Cai Shiqin of Foshan city in the southern province of Guangdong said his three-year-old daughter has been left with brain damage after her vaccination, and the family is struggling to cope on just 40 yuan (U.S. $5.80) a month paid to children with disabilities.

"The state should strengthen support of these children and offer compensation," Cai told RFA. "Now, the parents of vaccine victims are being forced to borrow money to get by."

The World Health Organization (WHO) has also called for stronger regulation of private-sector vaccines in mainland China.

Reported by Xin Lin for RFA's Mandarin Service, and by Wong Lok-to for the Cantonese Service. Translated and edited by Luisetta Mudie.