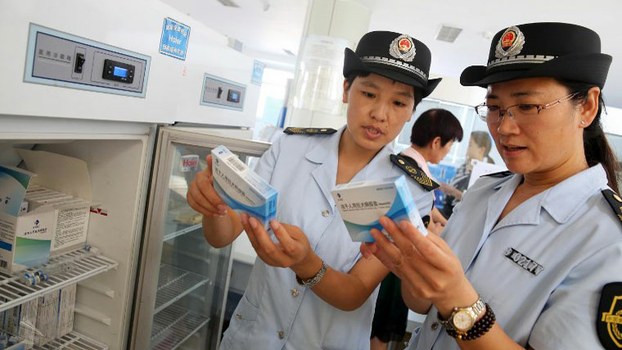 Food and Drug Administration officials check on vaccines for rabies at the Disease Control and Prevention Center in Huaibei in China's eastern Anhui province, July 24, 2018.

Chinese police are holding 15 people -- including the chairwoman of Changchun Changsheng Biotechnology -- under criminal detention amid an ongoing probe into fraudulent quality control at the company that sparked a recall of rabies vaccines already given to thousands of children.The ruling Chinese Communist Party in Beijing has sent an investigative task force to the headquarters of Changchun Changsheng in the northeastern province of Jilin after the company's manufacturing permit for the vaccine was revoked by the country's drug regulator last week."The Changchun new district public security bureau has detained 15 people, including the chairwoman and others, who are involved in the Changsheng case," Communist Party mouthpiece the People's Daily and state broadcaster CCTV reported.China's Food and Drug Administration (CFDA) has accused the company of fabricating production and inspection records linked to the rabies vaccine regularly given to infants.Provincial-level Centers for Disease Control and Prevention (CDCs) in Shanghai, Henan, Hainan, Chongqing, Shandong, Shanxi, Guangxi and Hebei have since announced a total suspension of rabies vaccinations.The Changsheng recall is the latest in a string of tainted or substandard vaccine scandals to hit China, with commentators hitting out at endemic corruption and profiteering in the country's biotech industry.Changchun Changsheng itself had previously sold 252,600 doses of ineffective DPT vaccines to inoculate children against diphtheria, whooping cough and tetanus.Legal channels

A parent surnamed Qi in the southwestern mega-city of Chongqing said parents there have banded together to form an activist group to pursue the company through legal channels."We are gradually putting this into practice here in Chongqing, within the limits of the law," Qi said. "We hired some human rights lawyers today, but we haven't decided if we're going to each file a lawsuit, several dozen of us, or whether we will do it as a single case."In 2016, the ruling Chinese Communist Party launched a nationwide probe of hundreds of people believed to be involved in an illegal vaccine-selling operation that peddled out-of-date or improperly stored vaccines, following reports of child and infant deaths and illnesses following immunizations.Some 350 local officials were blamed for the tainted vaccines scandal that began to emerge in the eastern province of Shandong, but parents of affected children have said the moves don't go far enough, and that they were targeted by the authorities to prevent them from speaking out or campaigning for compensation.Shandong-based parent Chen Binggan said his son had developed paralysis in both legs after being given the DPT vaccine at the age of three months."We got the vaccine from the batch that was substandard, that didn't pass quality checks," Chen said. "Not long after that happened, the health ministry kept contacting us, to say that there was nothing wrong with the vaccine.""But my son is now paraplegic and I can't think of anything else except the DPT that could have had such an effect on his legs," he said.Parents targeted for complaining

And Wang Hailan, from Shandong's Yucheng county, said her son had suffered severe health problems after being given an influenza jab in 2010."The vaccines we are getting are harming our children, and yet the government doesn't seem to be taking it seriously," Wang said. "Some [parents] have been fighting this for years, to no avail, and they are targeted for complaining by the authorities."She said she had found multiple problems with the way her son's flu jab was administered when she took up the case."The batch number on the certificate issued by the hospital when it vaccinated my son didn't match the batch number on the vaccine's quality control certificate," Wang told RFA.Meanwhile, political commentator Lam Kei said the recent condemnation of Changchun Changsheng by President Xi Jinping and premier Li Keqiang rang somewhat hollow, "like parents who wash their hands of their own offspring.""There was another issue with the DPT vaccine identified by the Jilin provincial FDA way back last October," Lam wrote. "They sat on that for nine months and didn't report it."Lam said the Jilin FDA official in charge of vaccines had also been responsible for the melamine-tainted infant formula milk scandal that erupted in 2008."Sun Xianze was 'punished' for the Sanlu infant formula tainted milk scandal 10 years ago, with a so-called 'administrative punishment'," Lam said in a commentary broadcast by RFA's Cantonese Service."Not long after that, he was on the fast track for a promotion," he wrote, adding that Sun was promoted to deputy head of the Jilin FDA, before being relieved of that post in February, with no reason given.Reported by Wen Yuqing for RFA's Cantonese Service, and by Qiao Long for the Mandarin Service. Translated and edited by Luisetta Mudie.