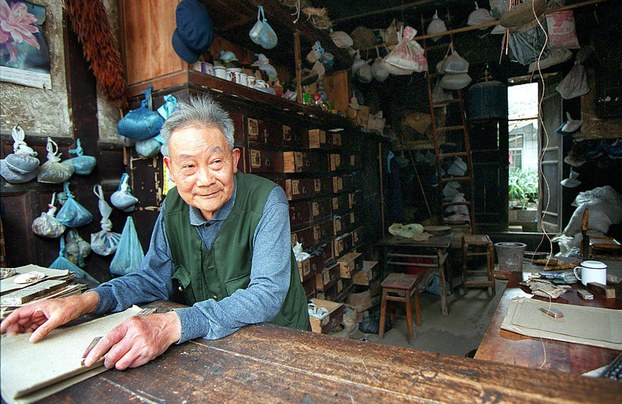 A Chinese doctor waits for customers at his private traditional Chinese medicine store on the outskirts of China's southwestern city of Chengdu, in file photo.

A recent survey of clinical trials in China has revealed fraudulent practice on a massive scale, according to a government investigation.China's food and drug regulator recently carried out a one-year review of clinical trials, concluding that more than 80 percent of clinical data is "fabricated," state media reported.The scandal is the result of "breach of duty by supervision departments and malpractice by pharmaceutical companies, intermediary agents and medical staff," the State Food and Drug Administration (SFDA) said in its report.The review looked at data from 1,622 clinical trial programs of new pharmaceutical drugs awaiting regulator approval for mass production, according to an expose in the Economic Information Daily newspaper.More than 80 percent of applications for mass production of new drugs have been canceled in the light of the findings, with officials warning that further evidence malpractice could still emerge in the scandal.According to the SFDA report, much of the data gathered during clinical trials were incomplete, failed to meet analysis requirements or were untraceable, the paper cited a source in the agency as saying.It said some companies were suspected of deliberately hiding or deleting records of adverse effects, and tampering with data that did not meet expectations.

The scandal came as no surprise to industry insiders, however."Clinical data fabrication was an open secret even before the inspection," the paper quoted an unnamed hospital chief as saying.It said China's generic drug industry is plagued with quality problems, hence the need for the manipulation of clinical trials data to meet standards that are high on paper.Many "new" drugs are simply combinations of existing drugs, while clinical trial outcomes are written beforehand, with the data massaged to fit in with it, the report said.It singled out third party inspection agencies known as contract research organizations, saying they have become "accomplices in data fabrication due to cutthroat competition and economic motivation."Healthcare professional Luo Liang told RFA that the domestic pharmaceutical industry struggles to turn a profit under current conditions."The domestic market for Western pharmaceuticals in China is either confined to very straightforward generic products that have been around for a long time ... or revolves around joint-venture pharmaceutical manufacture with foreign companies," Luo said."Either that, or Chinese pharmaceutical factories get hold of the formula for certain drugs whose patents have expired," he said. "There are no new drugs in development in the same way that there are overseas."

Poor implementationA doctor surnamed Zhang at a top hospital in the northern city of Xian said the problem doesn't lie with insufficient regulations governing clinical trials data, but with the failure to implement them."There are national standards for clinical trials in the development of Western pharmaceuticals," he said."Clinical trials must be carried out in three phases, and they must be assessed at the very least for safety," Zhang said. "But I don't know what happened here."Public safety problems in China aren't limited to the pharmaceutical industry and the figure of 80 percent is unlikely to surprise many in a country where citizens routinely engage in the bulk-buying of overseas-made goods like infant formula powder.Guangdong-based rights activist Mai Ke said there is an all-pervasive culture of fakery across all products made in the country."It's not just the medicines," Mai said. "In China, everything is fake, and if there's a profit in pharmaceuticals, then someone's going to fake them too."He said the problem also extends to traditional Chinese medicines, which are widely used in conjunction with Western pharmaceuticals across the healthcare system."It's just harder to regulate the fakes with traditional medicines than it is with Western pharmaceuticals, which have strict manufacturing guidelines," he said.According to Luo, academic ethics is also an underdeveloped field in China, leading to an academic culture that is accepting of manipulation of data."I don't think that the 80 percent figure is overstated," Luo said. "If you compare Western pharmaceuticals manufactured overseas with those manufactured in China, there is a huge difference in the ingredients; the quality of the China-made drugs is appalling."Reported by Sing Man for RFA's Cantonese Service. Translated and written in English by Luisetta Mudie.

the comment by the student from Oslo, Noway, is right to the point - where the original source and evidence is EXTREMELY important. Fact not some media bashing!

I would also very much like to see the original source!
Going back to the orignal source is a VERY important aspect of understanding research.

It would be nice to include the chinese source. I am very interested in seeing where within china this is published and how the local response is.

Please could you link us to the original report in Chinese? Thank you.