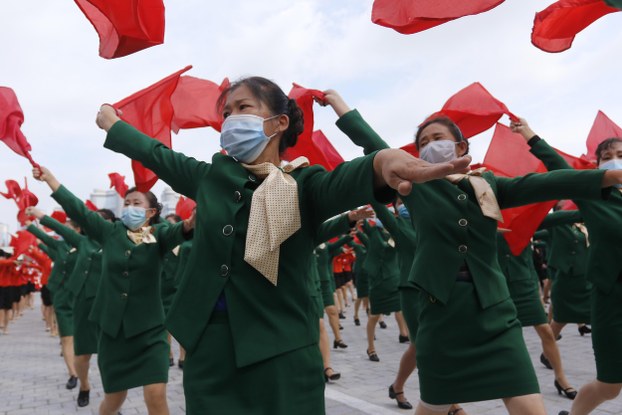 Women wearing face masks to help curb the spread of the coronavirus parade with flags during a rally to welcome the 8th Congress of the Workers' Party of Korea at Kim Il Sung Square in Pyongyang, North Korea, Monday, Oct. 12, 2020.

North Korea is cracking down on companies that manufacture coronavirus facemasks without a license, a move that sources told RFA said was aimed at protecting factories in the capital Pyongyang and stopping provincial factories from cashing in on surging mask demand.

Wearing masks in public is mandatory, part of the contry’sextensive measures to prevent the spread of COVID-19 including quarantining entire counties, cancelling major cultural events and warning that anyone found within a kilometer (0.6 miles) of the Chinese border would be shot.

Even though authorities still maintain the widely doubted claim that the country is virus free, they have still ordered the citizens wear masks in public, which has resulted in demand reaching all-time highs and investors looking to capitalize.

“More and more factories and trading companies are producing masks in Pyongyang and other cities… to keep up with surging demand,” an official in North Pyongan, in the country’s northwest, told RFA’s Korean Service Oct. 20.

“There’s a lot of profit in masks right now because authorities are randomly cracking down on residents not wearing masks, regardless of their age or sex.  But some of the mask manufacturers have not obtained official licenses,” said the source, who requested anonymity for security reasons.

The source said that in the city of Sinuiju, across the river border from China, most of the factories began operating at a reduced capacity once the pandemic hit, with the exception of the Sinuiju textile company, which was busy making masks and turning a profit. This inspired other investors to start their own operations, smuggling materials into the area to produce more masks.

“After finding out that illegal masks produced by unauthorized companies were being sold in large quantities in the market, the authorities mobilized law enforcement to investigate the illegal mask production facilities, punish those involved, and confiscate all masks and manufacturing equipment,” the source said.

Meanwhile a resident of neighboring South Pyongan province told RFA on Oct. 21 that demand for masks was also rising there on the government’s mandatory mask order, but authorities there were similarly busting companies making masks without government approval.

“They place mask inspection teams on every road and alley, so the mask market has expanded,” said the second source, who requested anonymity to speak freely.

“The stated reason for the crackdown is quality control. They say the unauthorized masks are defective against the coronavirus, but in reality, it is because people are flocking to buy the unlicensed masks because they are of higher quality and cost less than the officially licensed ones,” the second source said.

Another South Pyongan source told RFA that the licensing system was discriminatory toward companies in the provinces.

“Even though there is soaring demand for masks, the authorities have only been granting permission to factories in Pyongyang to import, produce or sell the materials needed to produce masks. This is a very biased policy that saves factories only in Pyongyang and selling them nationally,” said the third source.

“As the coronavirus continued to spread, authorities reluctantly approved mask production at certain textile factories in each province, but those provincial factories are not allowed to import raw materials. They must be supplied by raw materials from Pyongyang trading companies. People are critical of the government for allowing the capital to monopolize the supply chain.”