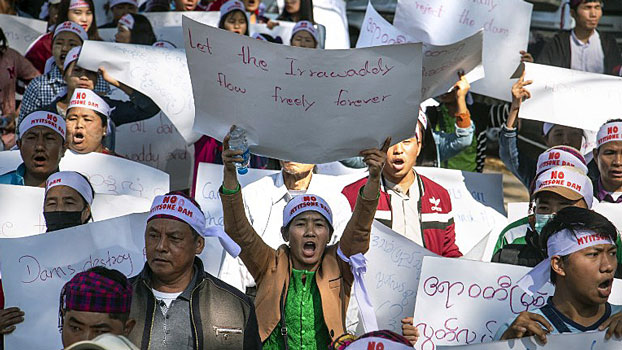 About 10,000 people in northern Myanmar’s Kachin state staged a massive protest Thursday against the controversial Chinese-backed Myitsone Dam and recent calls by China for the suspended project to resume.

The U.S. $3.6-billion dam was put on hold in 2011 because of widespread opposition to its environmental and social impacts, much to the dismay of China, which has since been pushing the ruling National League for Democracy (NLD) government to allow it resume.

“This is a call for a permanent halt of Myitsone dam project,” said Duwa Gumgrawng Awng Hkam, leader of the Kachin Democratic Party. “We consider [China’s move] an act of bullying because it looks like they are trying to get what they want, so I’d like to urge the government to address the issue decisively.”

Ashin Pyinnya Wuntha, a monk from Mandalay Monastery said that State Counselor Aung San Suu Kyi previously remarked that popular sentiment would determine the fate of the 6,000-megawatt hydropower project that originally entailed building seven dams around the confluence of the Mali and N’Mai rivers that form the Irrawaddy River.

“Daw [honorific]Aung San Suu Kyi had said it would be subject to the will of the people,” he told RFA’s Myanmar Service. “So, we need to show in strength that people have a total objection toward the Myitsone Dam project.”

A resident of Aung Myin Tha San Pya village who gave her name as Lura said, “The ruling government said before assuming power that it would be up to the people, but it is changing now. We want to demand that the government keep its promise and scrap the Myitsone Dam project for good.”

Former President Thein Sein had stopped the project amid protests over its enormous flooding area and detrimental environmental effect, as well as anger over the fact that most of its electricity would be exported to China.

Aung San Suu Kyi, who as opposition NLD leader at that time was one of the dam’s most vocal opponents, assured Beijing after the party won the 2015 general elections that Myanmar was willing to come up with an appropriate resolution that would suit both countries.

However, the lack of a decision on whether the project can now proceed has strained relations between the two countries.

“They should know how important Myitsone is to us,” Lura said about the Myanmar government. “We also want to tell the Chinese to withdraw.”

A statement issued by protest organizers called on the two Chinese companies implementing the project to respect people’s wishes and maintain good relations between the two nations by giving up plans to continue the project.

“We are ready to express our desire more aggressively if they fail to stop the project,” he added, but did not elaborate.

Ethnic Kachins and leaders from local political parties and social organizations blasted a statement issued by China’s embassy in Myanmar on Jan. 13 following a visit to the state by Ambassador Hong Liang, claiming that local residents did not object to the project, with opposition coming from individuals and social groups abroad.

The statement also said that the CPIC provided social, education, and health services to area residents forced to relocate from the dam site to Aung Myin Tha model village.

More than 1,000 villagers displaced by the project have been forced to move into housing built by the Chinese company, according to the online journal The Irrawaddy.

During his visit to Kachin state in late December, Hong was said to have cautioned Kachin political parties and civil society groups that the ongoing delay of the Myitsone hydropower project could affect future Chinese investment in Myanmar.

“I wonder if they were unaware of us when the Chinese ambassador said that we, the local people, didn’t object [to the project], or if they only see [our position] when we protest,” said Myitsone resident Jhar Khun, referring to Myanmar government leaders.

“That’s why we’re protesting,” she added.

Locals have reported that vehicles from Chinese companies are being spotted more frequently in the Myitsone area, though the project has not officially restarted.

CPI also held a contest in which local children at schools in Myitkyina township were asked to read a book about the benefits of the hydropower project and rewarded those who gave “correct” answers, residents said.

“We know that it’s just an excuse to say it’s difficult to make concessions in investment matters between the two countries, and that it could harm bilateral relations,” Tsa Ji of the Kachin Development Networking Group told RFA on Wednesday.

“It’s not difficult to make a decision after seeking the consent of all people living in Kachin state,” he said. “A decision could be reached once the Kachin state government is granted administrative and judiciary authority.”

Representatives of the Kachin Baptist Convention and the Catholic community called for the termination of the Myitsone project during a meeting with Myanmar military chief Senior General Min Aung Hlaing on Tuesday.

Rev. Hpauyawng Tu Mai, who attended the meeting, told the Myanmar Times that Min Aung Hlaing said the project would be subject to the people’s will even though it would be an important source of electricity generation.

In late January, Catholic Cardinal Charles Bo, the archbishop of Yangon, issued a statement appealing to project stakeholders to stop the dam, calling it a “death sentence for the people of Myanmar” in terms of the environmental damage it would cause and its negative impact on the country’s prospects for peace after decades of civil war.

“This dam is an environmental disaster,” he said in the statement. “[The] Myitsone dam is a toxic cognac for chronic war. Peace will fade [on] the horizon. A bleak future awaits the people of Myanmar. We do not deserve this.”