Myanmar Heads Into Next Round of Peace Talks Amid Criticism, Indecision 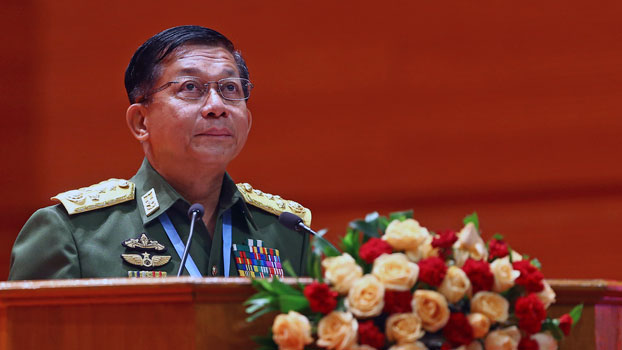 One week before Myanmar hosts a final round of peace talks with ethnic armies before year-end elections, leader Aung San Suu Kyi’s peace efforts are under fire from its military chief and critics who say a cumbersome process with little political support has made little progress in five years.

Aung San Suu Kyi won office in 2015 on a platform of establishing a civilian government after decades of military rule, and reviving efforts to end wars between the national army and dozens of armed ethnic groups that stretch back to the country’s independence from Britain in 1948.

The centerpiece of Aung San Suu Kyi’s efforts is the 21st-Century Panglong Conference, named after talks where her father, independence leader Aung San, signed a pact in 1947 on union with major ethnic groups that unraveled within a year, spawning wars over autonomy, territory and resources that rage on today.

In the run-up to the next Panglong gathering, scheduled for Aug. 19-21 in the capital Naypyidaw, Aung San Suu Kyi and her ruling National League for Democracy (NLD) government have taken flak from multiple directions even as squabbling continues over the agenda and the guest list for the talks.

Senior General Min Aung Hlaing, commander-in-chief of Myanmar’s powerful military, said the government's National Reconciliation and Peace Center (NRPC), which runs the peace negotiations and is chaired by Aung San Suu Kyi, has been ineffective and has failed to include members of the military negotiating team.

The military wants to strengthen trust by ending the fighting and moving on to peace talks with the various armed ethnic organizations, he said in a rare interview with the Russian magazine Politic, which was reprinted in the Myanmar military journal Myawaddy this week.

“However, we feel frustrated with the results of the peace process, discussions, and negotiations,” Min Aung Hlaing said.

He noted that the Myanmar military implemented a nine-month unilateral truce from Dec 2018 to Sept. 2019, but asserted that ethnic armies had strengthened their power, expanded territory under their control, and imposed burdens on civilians.

“Peace is the most important thing for our country, and I really desire it. However, peace cannot be implemented unilaterally. It needs all-inclusiveness,” Min Aung Hlaing said, and urged ethnic rebel armies to join talks on peace, including cease-fires, with the NRPC.

RFA could not reach government and military spokesmen for comment on the interview. 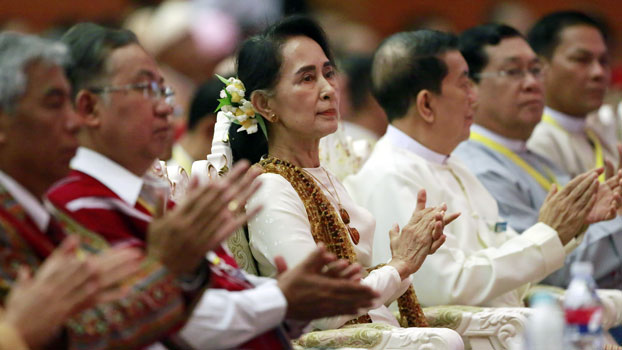 Monywa Aung Shin, secretary of the NLD’s Central Information Committee, told RFA on July 14 that the NLD’s role in the peace process is to facilitate talks between the military and ethnic armies.

“The NLD government is just a medium to facilitate the peace process,” he said. “The armed groups will make the real decision. It is ethnic armed groups and the military troops.”

Min Aung Hlaing is at the top of the list of six Myanmar generals recommended by a U.N. fact-finding team for referral to the International Criminal Court (ICC) for prosecution on genocide-related charges over a scorched-earth military campaign that forced more than 740,000 stateless Rohingya to flee into Bangladesh.

The commander in chief, who is also under U.S. and British sanctions and travel bans, heads an army that does not answer to civilian leader Aung San Suu Kyi and retains an effective veto in parliament as well as control over the police.

With the civilian government and the powerful military not working in tandem in the peace talks, trust is hard to build, say participants.

“The peace talks would be more effective if the government and the military are in agreement with the policies,” said Lamai Gum Jar from the Myitkyina-based Peace-talk Creation Group (PCG) which helps a Kachin military group negotiate with the government.

“Now, the government and the military delegates frequently contradict each other and have caused delays during the peace talks,” he said.

“It is hard for us to know which one has the final say,” he added.

Hla Maung Shwe, an adviser to the government’s Peace Commission, said he is not satisfied with the state of talks, after three sessions were held in August 2016, May 2017, and July 2018.

“We want to achieve more, but under the current circumstances the negotiations are quite challenging,” he said. 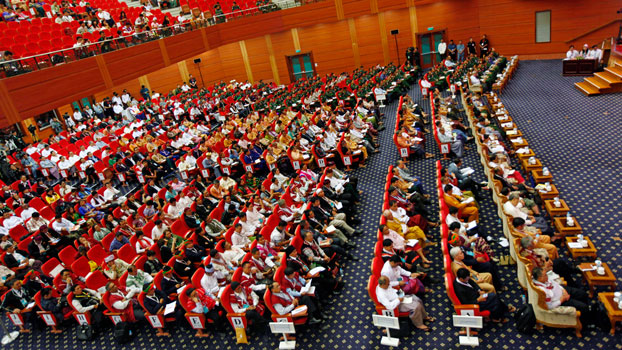 Representatives from the Myanmar government, the military, and ethnic armed groups attend the final day of the first session of the 21st-Century Panglong Conference in Naypyidaw, Sept. 3, 2016. Credit: Associated Press

The immensely complex peace process began under former president Thein Sein (2011-2016), who convinced eight ethnic armed organizations to sign a nationwide cease-fire accord (NCA) in October 2015. Two other groups signed the accord in February 2018, though eight others still have not.

Seven of the NCA non-signatories have not yet decided whether they will attend the NLD government’s final peace conference session on Aug. 19-21. The government did not invite the Arakan Army, which is battling Myanmar forces in Rakhine state, and the AA’s allies are staying away in solidarity.

Brigadier General Tar Phone Kyaw, secretary general of the Palaung State Liberation Front (PSLF) and the second-in-command of its armed wing, the Ta’ang National Liberation Army (TNLA), said the government needs to change some of the conditions it wants NCA non-signatories to agree to.

“It has required us to sign bilateral agreements for cease-fires with the Myanmar military, government, and four remaining ethnic armed groups,” he said. “Then, we may discuss how we can join NCA, together with the FPNCC [Federal Political Negotiation and Consultative Committee.]”

The FPNCC was set up in 2017 to represent ethnic armies that have not signed the NCA.

“There are some points we cannot accept. Therefore, we decided not to join it,” Tar Phone Kyaw said.

“If they want us to join now, they need to change these points. The peace talks have been stalled because they are not clear about how we will proceed,” he added.

Colonel Khun Okkar, chairman of the Shan state-based Pa-O National Liberation Organization, an NCA signatory, said all government, military and ethnic armed groups are responsible for the lack of progress.

“There are disagreements between the military and government,” he said. “There are unclear designations about which issues will be worked on by the coordination team from the military.”

“The government has failed in many areas,” he said. “The participants from the ethnic armed groups are also responsible. We have been wasting time, and there is not as much progress as there should have been.”

Thein Tun Oo from the pro-military think tank Thayninga Institute for Strategic Studies said he agreed with top general Min Aung Hlaing’s assessment, saying “the problem is the government does not have strong policies on the processes,”

“If it continues the peace process with indecisiveness, it will keep going on forever,” said added Thein Tun Oo, who added that the government has “no political will to guarantee the outcomes.”

Min Zaw Oo of the Myanmar Institute for Peace and Security said next week’s session could cover aspects of federalism and point the way to future talks under the new government produced by elections on Nov. 8.

“It is possible that the peace process will continue into the next government’s tenure,” he added. “I don’t think any significant agreements will come from this one.”