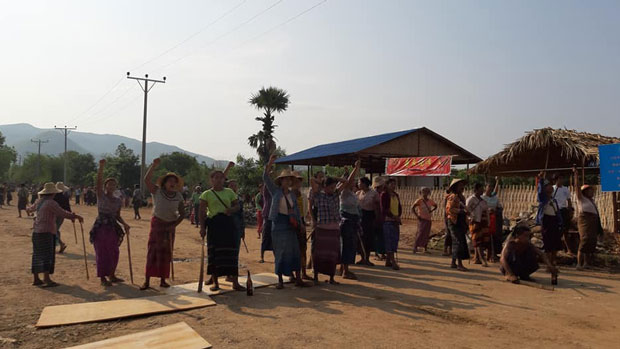 A Myanmar village administrator was sentenced Friday to one year in jail with hard labor on charges of defaming the state for getting involved in a May rally against a Chinese-backed coal-powered cement factory in Mandalay region, the man’s lawyer said Friday.

A court in Patheingyi township handed down the sentence to Moe Lin, who oversees the administration of about 100 households in Aungthabyae village, the defense attorney who gave his name as Sithu told RFA’s Myanmar Service.

The village administrator tried to mediate a conflict between protestors and police during the rally over the cement factory being constructed near the community, his attorney said.

“He has been charged for inciting the public,” Sithu said. “Today, he was sentenced to prison and hard labor. It is a totally wrong decision. He was trying to break up the fight as a local administrator.”

Moe Lin said he would appeal the court’s decision.

“I was performing my duties,” he said. “This sentence is unfair. I am not satisfied because I am innocent. I have never done anything to defame the state.”

“He was just performing his duties as a local administrator,” she said. “I am very disappointed with this sentence.”

During the May 15 protest, villagers blocked factory vehicles and demanded compensation for land they say they lost when an 18-foot-wide road was built as part of the construction work at the Alpha Cement Plant, operated as part of a joint venture between a local firm and a Chinese partner.

Villagers also urged authorities to address what they said were problems caused by an influx of hundreds of Chinese employees working at the site, and some demonstrators reportedly had set four vehicles and part of the factory property on fire.

Nearly 20 people were injured when police fired rubber bullets and tear gas to disperse the crowd of protesters.

An official from the township’s General Administration Department filed charges against 50 local residents in all for participating in the protest that turned violent.

They have been charged under Section 333 of Myanmar’s Penal Code for causing harm to a public servant, under Section 435 for committing mischief with an intent to damage, and under Section 114 for abetting a crime.

Ten of them are awaiting trial in Mandalay’s Obo Prison, and nine others have been classified as fugitives. Four other villagers were sentenced in July to 14 months in prison with hard labor.