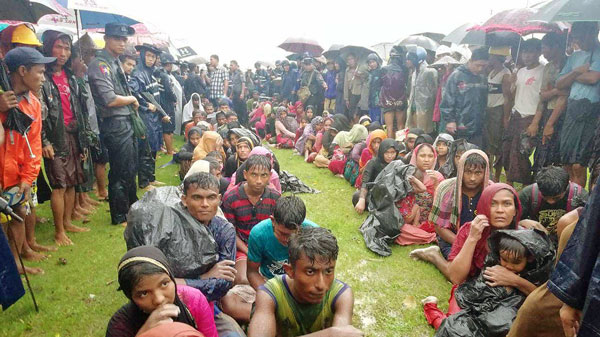 Rohingya refugees from Bangladesh sit in the rain after they and their wrecked boat washed up on a beach in Rathedaung township, western Myanmar's Rakhine state, June 12, 2018.
Credit: RFA

Authorities in Myanmar have verified that nearly all of the more than 100 refugees who washed ashore in Rakhine state earlier this week after bad weather wrecked their boat are Rohingya from Myanmar, except for 12 who are Bangladeshi citizens and will be returned to their country, two government officials said Wednesday.

Myanmar has determined that 92 of the 104 men, women, and children from a Myanmar-Bangladesh border camp who landed on a beach in Rathedaung province on the night of June 10 are from Maungdaw and Buthidaung townships in northern Rakhine state, the officials said.

“About 12 people said they are Bangladeshi citizens,” said Aung Thurein, director of Myanmar’s Ministry of Social Welfare, Relief, and Resettlement. “The rest said they lived in the Buthidaung and Maungdaw regions.”

Authorities are still verifying where the 92 Rohingya refugees resided in Rakhine state and where any relatives with whom they have been in contact currently live, he said.

“When we know exactly where they lived, we will send them back to their old places,” Aung Thurein said, adding that some of the refugees told authorities that were sailing to Malaysia.

In the meantime, the ministry, the Myanmar Red Cross Society, and the International Committee of the Red Cross are providing supplies for the refugees, he said.

The Ministry of Labor, Immigration, and Population has transferred the 12 people identified as being from Bangladesh to the Ministry of Foreign Affairs to be processed for return to that country, said Win Myat Aye, Myanmar’s minister for social welfare, relief, and resettlement.

The ministry “will contact the relevant [Bangladesh] embassy to discuss the issue, and then it will send them back to their home country,” he said in response to reporters’ questions at a ceremony in Rakhine’s capital Sittwe.

Authorities are arranging for the 92 for whom there are documents proving that they are from Rakhine state to stay temporarily in a repatriation center in Maungdaw's Nga Khu Ya village, he said.

Malaysia is a safe haven

The United Nations has said that the campaign, which forced nearly 700,000 Rohingya to flee to neighboring Bangladesh where they now live in sprawling settlement camps, amounted to ethnic cleansing in Buddhist-majority Myanmar.

Win Myat Aye is overseeing a repatriation program in which authorities are verifying the eligibility of Rohingya refugees who wish to voluntarily return to Rakhine based on previous residency in the region.

In recent years, thousands of Rohingya from Myanmar have attempted to travel by sea to Malaysia, a Muslim-majority country considered a safe haven, to escape systematic discrimination and the denial of access to basic services at home.

The Rohingya refugees aboard the boat on Sunday fled Rakhine state during the crackdown, but unintentionally landed back there when their vessel was destroyed at sea.

Mohammad Abul Kalam, Bangladesh's commissioner for refugee relief and repatriation, told RFA-affiliated online news service BenarNews on Wednesday that he was unaware of the capture of the Rohingya who said they were heading to Malaysia by boat.

“As far as we know, no boat left from Bangladesh territory,” said Major Shariful Islam, second in command of Border Guards Bangladesh in Teknaf, a sub-district in southeastern Bangladesh’s Cox's Bazar District.

“We keep vigil on the border,” he said. “Recently we obstructed some Rohingya trying to cross the Naf River from the Myanmar side and come to Bangladesh.”

“They could be the people who were sailing [on the boat], though I’m not sure,” he said. “But no boat loaded with Rohingya left from the Bangladesh side.”

Meanwhile, authorities in northern Rakhine state have extended a curfew in Maungdaw and Buithdaung townships for two more months, but shortened the hours during which it is in effect, a local official and state lawmaker said Wednesday.

The new curfew will be in effect from 10 p.m. to 5 a.m. daily, said state legislator Tun Aung Thein of the Arakan National Party, the dominant political party in Rakhine state that represents the interests of the predominantly Buddhist ethnic Rakhine people.

Maungdaw district’s General Administration Office issued the order for the curfew to be extended for another two months, he said.

Buthidaung administrator Kyaw Min Htun said such extensions are a normal procedure in the region.

Parts of Rakhine state had originally imposed dawn-to-dusk curfews following communal violence between Muslims and Buddhists six years ago that left more than 200 people dead and displaced tens of thousands of Rohingya who ended up in internal displacement camps.