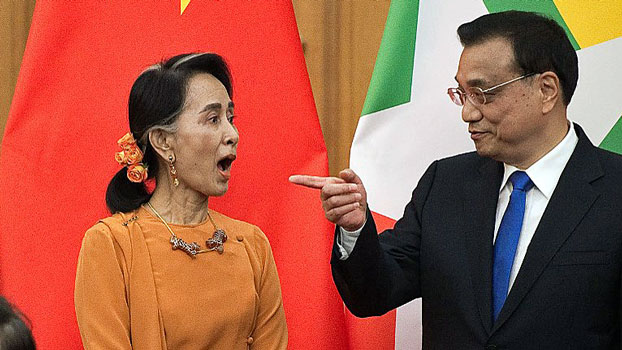 Myanmar State Counselor Aung San Suu Kyi (L) talks with Chinese Premier Li Keqiang (R) during a signing ceremony at the Great Hall of the People in Beijing, May 16, 2017.
AFP

When Myanmar’s Aung San Suu Kyi heads to Beijing at the end of April to attend China’s Belt and Road Forum for International Cooperation, she will be caught between Chinese leaders’ strong desire to complete a controversial dam project and growing public opposition to the dam amid wider suspicion about other Chinese initiatives, Myanmar political analysts said Monday.

The fate of the Myitsone Dam, a U.S. $3.6 billion Chinese-backed hydropower project on the Irrawaddy River in Kachin state that was put on hold in 2011 amid heavy public opposition, is at the top of the list of issues to be discussed between Myanmar and Chinese leaders at the second forum, they said.

“We see that Myitsone Dam project is now under the Belt and Road Initiative [BRI],” said Myanmar economist Zeyya Thu, referring to the massive infrastructure initiative that China’s President Xi Jinping has made the centerpiece of his foreign policy.

The BRI is a U.S. $1-trillion plan to recreate Silk Road trade routes through Asia and Africa to Western markets. The immense undertaking includes the building of new roads, railway lines, and ports in the Pacific and Indian oceans, and the construction of oil and gas pipelines to Russia, Kazakhstan, and Myanmar.

He also said the two countries will likely issue details of proposed infrastructure projects, though he didn’t elaborate on them.

“There could be the signing of memorandums of understanding [MoUs],” he said. “There could be discussions on the completion of ongoing projects and processes to complete the remaining parts.”

Myanmar political analyst Hla Kyaw Zaw, who lives in China, said Myanmar leaders will soon be required to issue a final decision on whether they will allow the construction of the suspended project to continue.

She also noted that more than a dozen such agreements were signed when Aung San Suu Kyi attended the first forum in Beijing in May 2017, which drew 29 foreign heads of state and government and representatives from more than 130 countries and 70 international organizations.

“When Daw [honorific] Aung San Su Kyi attended the first forum, they signed as many as 13 or 17 agreements between two countries,” she said. “I think they will do the same this time. They signed agreements with almost every country present at the forum.”

In addition to the MoUs signed during the two-day summit in Beijing, China's President Xi Jinping pledged to give Myanmar U.S. $124 billion to expand the scope of the BRI in the Southeast Asian country

Then in September 2018, Myanmar signed an MoU with China to create the China-Myanmar Economic Corridor, part of the BRI. The roughly 1,000-mile corridor will link Kunming, capital of China’s Yunnan Province, to Myanmar’s major economic hubs in Mandalay and Yangon and to the Kyaukphyu Special Economic Zone in Rakhine state.

At the end of that month, Myanmar formed a steering committee headed by State Counselor Aung San Su Kyi, and including relevant government ministers and prime ministers, to implement tasks related to China’s BRI projects.

At the upcoming Belt and Road Forum for International Cooperation, China will continue to propose projects to be implemented between Myanmar and China under the BRI, and Myanmar policymakers will decide if the projects are feasible, analysts said.

Construction of the 6,000-megawatt Myitsone Dam started in 2009 but was put on hold two years later by former President Thein Sein and his military-backed administration because of widespread opposition to its enormous flooding area and detrimental environmental impact, as well as anger over the fact that 90 percent of its electricity would be exported to China.

The decision came much to the dismay of China, which has since been pushing Aung San Suu Kyi’s ruling National League for Democracy (NLD) government to allow the hydropower project to resume, arguing that Chinese companies have already invested heavily in it.

Hong Liang, China’s ambassador to Myanmar, told ethnic Kachin leaders from local political parties and social organizations in December that hydropower produced by the Myitsone Dam would be necessary to implement the BRI in Myanmar.

He later angered those same leaders a month later when China’s embassy in Myanmar claimed that local residents did not object to the project.

In rare public comments about a controversial project, Aung San Su Kyi said in mid-March that it is important for her government to uphold investment projects approved by previous administrations or risk being perceived by investors as “not reliable and volatile.”

She urged the public to be open-minded about mega-projects such as the Myitsone Dam and assured them that the government would make decisions responsibly. 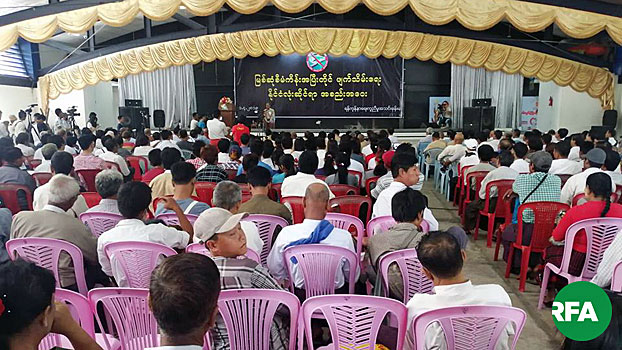 Neither electricity, nor jobs

Popular opposition to the hydropower project, however, is still growing.

In February, thousands of people in Kachin state staged a mass protest against the dam and recent calls by China for the suspended project to resume.

And on Monday, a group of environmental experts, prominent writers, NGO leaders, and lawyers formed a national committee to work towards the permanent cancellation of the Myitsone Dam project.

About 200 of them met in the commercial hub Yangon to show their solidarity with Kachin state residents fighting the project, according to the online journal The Irrawaddy.

“First and foremost, the overwhelming majority of Myanmar people are against the construction of Myitsone Dam,” said writer Ko Tar at the event.

“Second, this project serves only China’s interests,” he said. “It doesn’t give us people of Myanmar any benefits at all. It gives us neither electricity nor job opportunities. Besides, it would undermine the sovereignty of our country. It will give China a stranglehold on the country’s lifeline.”

“We have nothing to miss about this project as we have seen that almost every Chinese project in the country has resulted only in problems,” he said.

Kyaw Naing from the Meikhtila People’s Welfare Network warned of the negative results of China’s continued involvement in the hydropower project.

“If we are negligent about taking action on this project and avoid responsibility, future generations could end up as slaves of the Chinese, and our country could end up as a province of China,” he said.

“We will protect the interest of the country,” he said. “With other well-informed citizens, we will protect our natural resources and the well-being of citizens to the fullest.”

With due respect Ma'am. Don't worry China is going to eat your country up piece by piece. Yummy yummy.