Myanmar Navy Detains 50 Rohingya Who Were Trying to Leave Country 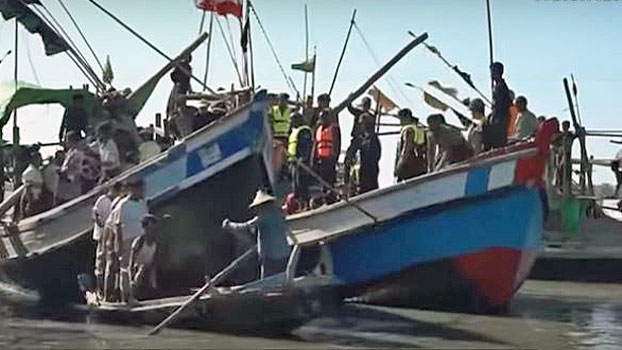 The Myanmar Navy has detained roughly 50 Rohingya refugees at sea in southern Myanmar’s Ayeyarwady region, while local authorities have apprehended five suspected human traffickers who allegedly helped them try to leave the country for an unknown destination, a local official said Thursday.

“We don’t know exactly how many people were found onboard, but at least 48 Muslims are there,” he told RFA’s Myanmar Service.

“The navy is detaining those people and awaiting orders from the officers,” he said. “Authorities are detaining five traffickers in the case.”

Myanmar military spokesman Brigadier General Zaw Min Tun said he had no information about the incident.

RFA was unable to reach Ayeyarwady region’s minister of labor, immigration, and population for comment.

Kyaw Nay Min, a Muslim journalist and editor of the Yangon-based Chun Journal that reports on the Rohingya in Myanmar, said authorities should free the boat people.

“Those young people from Rakhine state are students, and they have difficulties in trying to go to school, and they don’t have job opportunities,” he told RFA. “That’s why they try to leave the state.”

“If the government is positive-minded, it should take care of them or send back to their original homes,” he added. “Moreover, the government should ask why these people are trying to run away.”

But rights activist Nicky Diamond from Southeast Asia-based Fortify Rights said authorities should work with international aid groups to help the Rohingya boat people instead of sending them back to Rakhine state.

“If the authorities take legal action to sentence them or to send them back, those are not the best ways to resolve the problem,” he said.

“Otherwise, the government may have a headache when it writes its quarterly report for the ICJ,” he said, referring to a legally binding order by the International Court of Justice in January for Myanmar to prevent the killing or serious injury of the Rohingya and report on its compliance with this and other measures.

The order stems from a larger case against Myanmar filed by Gambia in November 2019, accusing the country of violating the 1948 Genocide Convention during the alleged expulsion of Rohingya to Bangladesh amid a military-led crackdown on the minority community in northern Rakhine state in 2017.

The campaign of violence, which included random killings, mass rape, and village burnings, prompted more than 740,000 Rohingya to flee to neighboring Bangladesh where they now live in sprawling displacement camps.

In the last several years, thousands of Rohingya have fled or attempted to flee persecution and poverty in Buddhist-majority Myanmar on boats organized by human traffickers and bound for other Southeast Asian nations, especially Muslim-majority Malaysia.

On Tuesday, at least 15 people drowned when an overloaded boat carrying 138 Rohingya refugees to Malaysia struck a slab of coral in shallow water and capsized in the Bay of Bengal.

In December 2019, the Myanmar Navy picked up more than 170 Rohingya in waters off southern Myanmar’s Tanintharyi region in the Andaman Sea as they attempted to leave Myanmar while traveling to a third country.

Most of them were confirmed as residents of Rakhine state and were sent back to their homes or to live with relatives if they did not have a home.