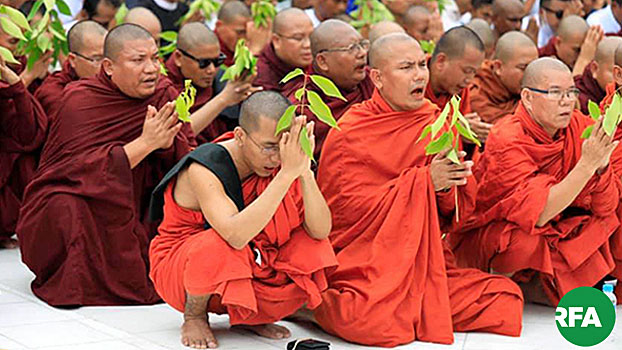 Myanmar supporters of ultra-nationalist monk Wirathu, sought by police on sedition charges, gather to pray at Shwedagon Pagoda in Yangon, May 30, 2019.
RFA

Hundreds of hard-line Buddhist monks and nationalists gathered at Myanmar’s most sacred religious site on Thursday in a show of support for firebrand monk Wirathu, for whom a court has issued an arrest warrant on sedition charges after he made inflammatory comments against the civilian-led government and its leader Aung San Suu Kyi at nationalist rallies.

Notorious for his hate speech against Muslims, especially Myanmar’s Rohingya minority, Wirathu faces charges under Section 124(a) of the country’s Penal Code for “excit[ing] or attempt[ing] to excite disaffection towards the government,” though police have yet to lay out the specific grounds for the warrant.

Media reports said Wirathu is wanted because he has criticized Aung San Suu Kyi for having married a foreigner — a British scholar who died in 1999 — and for her handling of the conflict with Rohingya Muslims in Rakhine state.

Some of the demonstrators who prayed for the monk at the Shwedagon Pagoda in Yangon said they did not know where Wirathu was and that they would continue protesting the issuance of his arrest warrant by a local court on Tuesday, although Wirathu himself had told local media by phone on Wednesday that he was in the commercial hub.

Police said Tuesday that the arrest warrant had been issued under Section 124(a). A day later they went to Masoyein Monastery in the central Myanmar town of Mandalay to apprehend Wirathu, but did not find him there.

“We gather today at the Shwedagon Pagoda to pray for Sayadaw U [honorific] Wirathu’s physical and mental well-being and that he stays out of danger,” said a nationalist monk named Aggi who participated in the demonstration. Sayadaw is the Buddhist title for senior monks or abbots of monasteries.

Monks from the disbanded Buddhist ultranationalist organization the Committee for the Protection of Nationality and Religion, known in Myanmar as Ma Ba Tha, told RFA’s Myanmar Service that Wirathu was in Yangon, but that he didn’t show up at the regional State Sangha Maha Nayaka (Mahana) office where was asked to appear on Thursday.

The Mahana is a government-appointed council that oversees and regulates the Buddhist clergy in Buddhist-majority Myanmar. In March 2017, its Mandalay office prohibited Wirathu from giving sermons for a year because of his hate speech and anti-Muslim rhetoric.

After Wirathu failed to appear for the meeting, the Ministry of Religious Affairs and Culture announced that the Mahana had suspended the summons it issued to warn the monk about his provocative behavior at a rally.

“I talked with the venerable monk [Wirathu] the other day for the last time,” said ministry spokesman Aung San Win. “We lost connection with him after the Mahana suspended the plan. He usually doesn’t stay at the monasteries. Instead, he stays at his patrons’ homes.”

“One thing I can say is that he will definitely show up,” he added. “He won’t run away.”

A New York Times report quoted Wirathu as saying Wednesday that “I’m in Yangon. I am not hiding.”

“They can come arrest me. I’m not afraid of prison,” he said.

“The home affairs and religious affairs ministries have taken the step of issuing a warrant for Wirathu’s arrest,” he told RFA’s Myanmar Service. “It is assumed that they are being provoked to get involved in the situation.”

“If Wirathu is arrested and sentenced to prison, people will be provoked even more, and it could lead to public unrest,” he said. “Many people prefer to see him as a fugitive rather than in prison.”

Under the charges, the once a prominent Ma Ba Tha figure could be sentenced to three years to life in prison, but under Myanmar law he would first have to be defrocked by Buddhist authorities, according to a report by the Associated Press.

RFA could not reach Wirathu or officials at the Ministry of Home Affairs for comment.

“Sayadaw told us that he is not afraid of going into a jail, but he is afraid of getting into darkness,” said nationalist Win Ko Ko Lat who participated in the gathering at the Shwedagon Pagoda. “Some people might criticize what we are doing. U Wirathu had planned to join us today. It is not that difficult for police to arrest him.”

San Min, an official at Myanmar’s General Administration Department, which serves as the civil service for Myanmar’s 14 state and regional governments and provides the administration for its districts and townships, filed a lawsuit against the monk on Tuesday afternoon at the Yangon Western District Court.

Myanmar attorney Aung Thein said that monks who make inflammatory comments on social media are likely trying to foment social unrest in the country. Wirathu was no exception in this regard, but his provocative remarks led to the termination of his Facebook account.

“There are many Buddhists who have made aggressive comments,” he said. “They use derogatory language which is inappropriate for a Buddhist monk.”

“I have concluded that there must be groups trying to instigate unrest in various forms,” Aung Thein said.