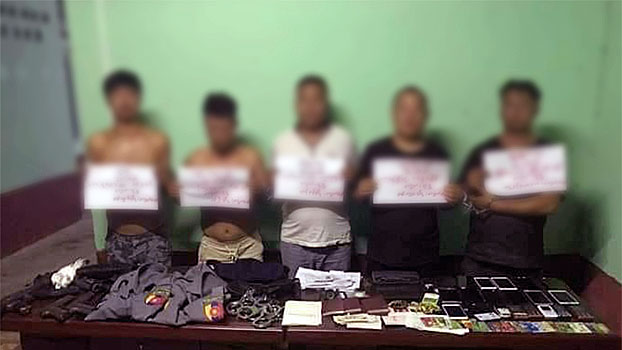 Five Chinese nationals arrested for impersonating police officers stand behind a table with police uniforms and equipment found on them following their apprehension in Laukkai, capital of the Kokang region in Myanmar's northern Shan state, Oct. 15, 2019.
Photo courtesy of Ko Lwin (Swar)/iSee Media

Myanmar authorities on Tuesday arrested 17 Chinese nationals posing as policemen and carrying fake guns in the Kokang region of northern Shan state, a police official said, raising questions as to whether they were involved in illegal activities targeting Chinese tourists in the border area.

The Chinese citizens, believed to have entered Myanmar illegally, were apprehended in the Kokang capital Laukkai near the China-Myanmar border, said Zaw Khin Aung, chief of the Shan state police force.

“We got 17 of them in total,” he told RFA’s Myanmar Service.. “We will check the status of the rest of them with immigration authorities.”

“Five of them have been charged with impersonating police officers,” he said. “They even possessed police accessories like handcuffs.”

Authorities made the arrests after they received tips that Chinese nationals wearing police uniforms were in the area northeast of Laukkai town, the police chief said.

They found on the Chinese nationals two police uniforms, a bulletproof vest, two fake pistols made of fiber, and another fake gun that resembled an M22 pistol, he said.

The members of group have been charged under Section 170 of Myanmar’s Penal Code for impersonating public servants, Zaw Khin Aung said.

Aung Naing Swe, the information officer at the Chinese Embassy in Yangon, told RFA that the embassy was not aware of the arrests.

“We don’t have any information about this,” he said. “We haven’t heard anything about it.”

Myanmar’s Ministry of Foreign Affairs usually informs the Chinese Embassy when Chinese nationals are arrested in the country.

Local sources told RFA that Chinese nationals who enter Myanmar illegally could be posing as police officers to extort money from other Chinese who also are in the Kokang region illegally.

A large number of Chinese nationals pay daily visits to the Kokang region, where the common language is Mandarin Chinese.

China is believed by security experts to be the direct or indirect source of weapons for some of the ethnic armies fighting the Myanmar government, including the ethnic Kokang Myanmar National Democratic Alliance Army (MNDAA) in Shan state.

In northern Shan state’s Lashio township, meanwhile, an unknown gunman assassinated a village administrator Tuesday morning while the official was at his farmhouse with his family, a local police officer said.

“We are trying to identify the suspect,” he told RFA. “The gunman called [Mar Ku] from outside the house and spoke in the Lahu dialect. As he came out, he was shot and died on the spot. The gunman then fled.”

Through interviews with village residents, police learned that Mar Ku owned a small business and had been entangled in financial problems, Myint Kyaw said.

Local witnesses said the shooter had coerced an ethnic Lahu man from Mankaung village to show him where the villager administrator lived, and shot dead both the man and Mar Ku.

Villagers told RFA that Mar Ku had shown personal animosity toward a member of an armed group.

One resident also said a local man who resented Mar Ku had made death threats against him and had joined an armed group about two weeks ago.

But the man had recently defected from the group, said the resident who declined to be named out of fear for his safety.

“The village head was in the house with his daughter and son-in-law,” the man said. “The assailant was posing as a local official to lure him out.”

Mankaung village, located on Namtu-Lashio Road about 13 miles from Lashio town, is difficult to access, according to volunteers from a local humanitarian group who went to the area to transport Mar Ku’s body to Lashio Hospital on foot.

More and more Chinese crooks come to Vietnam with a visa for tourist and many of them committed crime recently, but they did not aim at the Chinese nationals; they usually aimed at Vietnamese (the locals). However, most of the criminals were sent back to China for prosecution in the so-called extradition law. It is ridiculous that they committed crime in VN, not in China and why did the Vietnamese government return them to China?