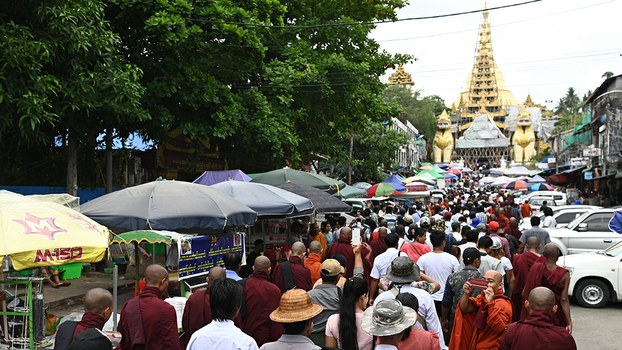 Supporters of ultra-nationalist monk Wirathu gather to pray at Shwedagon pagoda in Yangon, May 30, 2019.

Myanmar’s Ministry of Home Affairs was ordered Friday to arrest and prosecute firebrand Buddhist monk Wirathu for sedition after he made inflammatory comments against the civilian-led government and its leader Aung San Suu Kyi at nationalist rallies.

An arrest warrant was issued by a local court for Wirathu on May 28 under Section 124(a) of the country’s Penal Code for “excit[ing] or attempt[ing] to excite disaffection towards the government,” though police have yet to lay out the specific grounds for the warrant.

Authorities have been searching for the monk, who is known for directing hate speech against Muslims—especially Myanmar’s Rohingya minority—since the warrant was issued.

Local media has reported that Wirathu is being sought by police for criticizing Aung San Suu Kyi for marrying a foreigner—a British scholar who died in 1999—and over her handling of the conflict with Rohingya Muslims in Rakhine state during a May 5 nationalist rally.

On Friday, Kyaw Tint Swe, the Minister of the Office of the State Counsellor, told reporters in the capital Naypyidaw that the government in central Myanmar’s Mandalay region, where Wirathu’s Masoeyein Taikthit monastery is located, had brought a case against the monk.

“The regional government has filed a lawsuit after the administration instructed it to do so,” he said.

Kyaw Tint Swe noted that there are some “complications” connected to Wirathu’s case because he is a member of the Sangha—the country’s monastic order—and said that some “adjustments between religious and police regulations” would need to be made in handling his case, without specifying.

Wirathu’s supporters recently told RFA’s Myanmar Service that he is in Yangon, but didn’t show up at the regional State Sangha Maha Nayaka (Mahana) office where was asked to appear on Thursday.

The Mahana is a government-appointed council that oversees and regulates the Buddhist clergy in Buddhist-majority Myanmar. In March 2017, its office in Mandalay prohibited Wirathu from giving sermons for a year because of his hate speech and anti-Muslim rhetoric.

After Wirathu failed to appear for Thursday’s meeting, the Ministry of Religious Affairs and Culture announced that the Mahana had suspended the summons it issued to warn the monk about his provocative behavior at a rally.

But on Friday, Kyi Min, the deputy minister of Religious Affairs and Culture, told RFA that based on recommendations by the Mahana, his ministry “will proceed with action against Wirathu, as he has failed to adhere to religious principles.”

The central government’s announcement came a day after hundreds of hardline Buddhist monks and nationalists gathered at Myanmar’s most sacred religious site, Shwedagon Pagoda in Yangon, in a show of support for the monk and to pray for his safety.

The group of monks from a disbanded Buddhist ultranationalist organization called the Committee for the Protection of Nationality and Religion, known in Myanmar as Ma Ba Tha, continued their protest against the issuance of his arrest warrant at the site on Friday.

Government spokesperson Zaw Htay told RFA that authorities are monitoring the protests, which he said drew supporters from several regions throughout the country, and said they had “received a lot of information.”

“We have considered a lot [of factors] with regards to handling the issue, after consulting with administrative and security officials,” he said.

“Stability is of the utmost importance, and we will proceed in accordance with the rule of law. We cannot give in on this regard. We have to take decisive action against any harm to state stability, no matter how big or small.”

When asked about the case, Myanmar Army spokesperson Brig-Gen. Zaw Min Tun said only that “the president [Win Myint] will be accountable” for Wirathu’s arrest.

Meanwhile, Wirathu has continued to issue statements via social media, and on Thursday posted a video message in which he questioned why his comments had led to a warrant for his arrest and sharply criticized Aung San Suu Kyi’s ruling National League for Democracy (NLD) party.

He also recently goaded authorities to “come arrest me” in Yangon, saying he is “not afraid of prison,” in an interview with the New York Times on Wednesday.

If found guilty of sedition, Wirathu could be sentenced to three years to life in prison, but under Myanmar law he would first have to be defrocked by Buddhist authorities, according to a report by the Associated Press.

Observers have warned that his arrest or sentencing could lead to public unrest in Myanmar, where some 90 percent of the country’s population practices Buddhism.

But many Buddhists have disavowed the anti-Muslim and ultranationalist rhetoric of Wirathu, who once referred to himself as the “Buddhist bin Laden.”

One Buddhist resident of Yangon told RFA that Wirathu would do better to focus on the work of a monk, and that “politics are meant for laymen.”

“He has done a lot of damage to the Sasana [religion] as a member of the Sangha,” the resident said.