Reuters Myanmar reporters Wa Lone (L) and Kyaw Soe Oo (R) gesture as they walk toward the gate of Insein Prison in Yangon after being released under a presidential amnesty, May 7, 2019.
RFA

Press freedom advocates hailed the release of journalists Wa Lone, 33, and Kyaw Soe Oo, 29, among more than 6,500 prisoners freed under a presidential amnesty, but they lamented that several journalists are among some 300 others who continue to be unjustly imprisoned in the country.

The pair were arrested in December 2017 while pursuing a story about the killing of 10 Rohingya Muslims during a brutal military-led crackdown in western Myanmar’s Rakhine state. Authorities detained them shortly after two policemen with whom they had dinner handed them classified documents related to the atrocities in what their lawyers said was a setup.

The reporters, who were awarded a Pulitzer Prize in April for their Rohingya exposé, were sentenced in September 2018 after a lengthy series of hearings and a trial.

“Reuters reporters Wa Lone and Kyaw Soe Oo are among those released under the presidential amnesty,” government spokesman Zaw Htay told the media in Loikaw, eastern Myanmar’s Kayah state, adding that the two journalists were freed in the long-term interest of the state.

Press freedom groups blasted the government for not releasing the pair earlier during two other presidential amnesties marking Myanmar’s Buddhist New Year in April. They also condemned the country’s Supreme Court for a ruling upholding the journalists’ convictions, despite evidence and testimony that pointed to a police setup.

“We congratulate Wa Lone and Kyaw Soe Oo on walking free from unjust imprisonment and applaud [that] they have now been reunited with their families,” said Phil Robertson, deputy Asia director at New York-based Human Rights Watch, in a statement. “These courageous investigative journalists should have never been arrested, much less imprisoned, in the first place, and their release was long overdue.

‘Crisis is not over’

Rights groups have decried a series of arrests of peaceful critics of the military and the government in recent weeks, including satirical performers, political activists, and journalists, dealing further blows to freedom of expression and press freedom in the developing democracy.

“[T]he crisis is not over for the literally dozens of other Burmese journalists and bloggers who are still facing baseless criminal charges for their reporting about the Tatmadaw [Myanmar military] or [ruling] NLD [National League for Democracy] government officials,” Robertson said.

“The case against Wa Lone and Kyaw Soe Oo was a travesty of justice from start to finish, and they should never have spent a day in prison,” he said in a statement.

“While all those who campaigned for their release welcome the government’s decision, the reality is the country retains a range of repressive laws used to detain journalists, activists, and any perceived critic of the authorities,” he said. “Until these laws are repealed, journalists and activists remain under a permanent threat of detention and arrest.”

“The government must follow through its rightful decision to free Wa Lone and Kyaw Soe Oo by releasing all other journalists and prisoners of conscience detained on hollow charges, and by repealing all laws that keep a chokehold on freedom of expression,” Bequelin said. 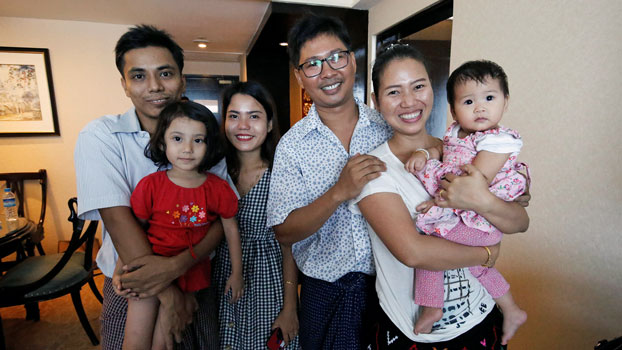 Reuters reported that its editor-in-chief, Stephen J. Adler, said he was thrilled by news of the pair’s release.

“We are enormously pleased that Myanmar has released our courageous reporters, Wa Lone and Kyaw Soe Oo,” he was quoted as saying. “Since their arrests 511 days ago, they have become symbols of the importance of press freedom around the world. We welcome their return.”

The U.S. embassy in Myanmar issued a brief statement saying that it “welcomes the release of reporters Wa Lone and Kyaw Soe Oo. We are glad they can return to their families.”

Britain’s Foreign Secretary Jeremy Hunt told Reuters in London that the release is “fantastic news for Wa Lone and Kyaw Soe Oo who have been in prison unjustly for a very long time now.”

“All of us who support a free press are heaving a huge sigh of relief,” he said.

“I am grateful to all who helped me while I was in prison and to those around the world who prayed for my release,” Wa Lone told the media outside the prison’s entrance. “I am now overwhelmed and excited to see my family and colleagues. I can’t wait to go back to the newsroom.”

After the Supreme Court upheld the journalists’ convictions on April 23, their families sent appeal letters to President Win Myint and State Counselor Aung San Suu Kyi, who herself was a political prisoner as an opposition candidate and denied legal due process.

Most prisoners who were freed Tuesday had been serving sentences for drug offenses, as were those released during the earlier pardons.

Twenty-three of 30 jailed individuals whose release was requested by some of the country’s ethnic armed groups were also among those freed, said government spokesman Zaw Htay.

Twenty political prisoners, including the two Reuters reporters, were included in the final amnesty, still leaving behind more than 300 others awaiting trial, according to the Assistance Association for Political Prisoners (Burma) (AAPP), a human rights NGO based in Mae Sot, Thailand that tracks Myanmar prisoners of conscience.

Aye Maung and Wai Hin Aung received 20-year jail terms in March for high treason and defamation for making inflammatory speeches against the government at a public event, while Aung Ko Htway is serving two years in jail with hard labor for describing his abduction and forced military service and for contempt of court.

“Many political prisoners are still left in prison,” AAPP member Aung Myo Kyaw said. “If the government is dedicated to achieving national reconciliation and peace, it is important that it should release all political prisoners.”

Wai Hin Aung’s elder brother, Thein Win, said he was hopeful that his brother and Aye Maung would be released because the government’s announcement for the final amnesty said it was intended for national reconciliation.

“We heard rumors that his name was among those to be released at midnight,” he told RFA’s Myanmar Service. “The president’s announcement about the amnesty said it was for [the purpose of] national reconciliation, so we were certain he would be released and asked family members in Yangon to meet him in front of Insein Prison.”

Aung Ko Htway’s elder sister, Nay Zar Htun, said she was surprised that her brother was not included in the final amnesty.

“We had high hopes that he would be among those released when we saw that Wa Lone and Kyaw Soe Oo [were freed],” she told RFA. “This is the fourth time we came to see if he would be released.”

“We will not lose hope although he has been excluded,” she added. “I have nothing more to say since we all know he was unfairly sentenced.”