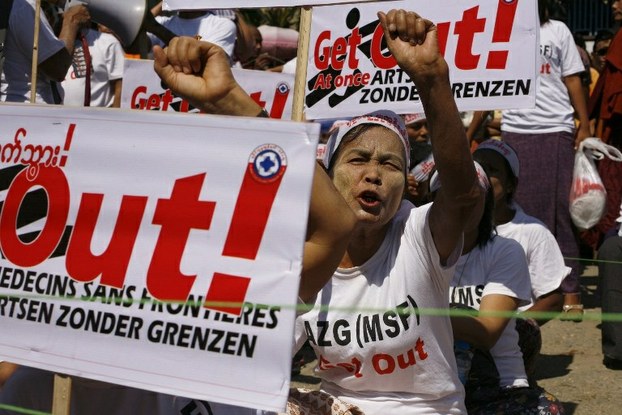 Protesters demonstrate against an international NGO in Sittwe on Feb. 22, 2014.

Buddhist mobs went on a rampage in western Myanmar’s Rakhine state in a new surge of violence Thursday, hurling stones and attacking the offices of international aid groups sent to care for thousands of area residents displaced by two years of violent ethnic conflict.

The rioting began late Wednesday when hundreds of ethnic Rakhine Buddhists smashed windows at the offices of German medical aid group Malteser International in the state capital Sittwe after a staff member of the group was reported to have removed a Buddhist flag from its building.

The United Nations, whose offices were also attacked, condemned the violence and so did the United States, three of whose citizens were among aid workers given "emergency relocation." Washington questioned the inability of Myanmar’s security forces to stop the spread of the riots.

Buddhist flags have been flown across Sittwe in recent days as a symbol of opposition to Rakhine state’s widely despised Rohingya Muslim community, who rights groups say have borne the greatest share of suffering since communal clashes erupted in 2012.

The Rakhines and local authorities have since accused international nongovernmental organizations (INGOs) now working in the state of giving preferential treatment to the Rohingyas , resulting in further tensions between the two groups.

“Some INGOs have frequently insulted our religion and harmed the rights of the Rakhine people,” local resident and former political prisoner Naing Soe told RFA’s Myanmar Service on Thursday.

“Local people have been angry, and those feelings came out in the open last night,” he said, adding, “I think we would have fewer problems if the government would do something to ease our anger.”

A Rakhine state government spokesperson blamed Malteser International staff for provoking the unrest, saying, “I think the problem erupted because the INGO staff took down the Buddhist flag.”

“The owner of the building put up the flag himself, and he can do whatever he wants,” he said.

“We went there afterward with several security guards and brought two foreigners who took down the flag to a police guesthouse. We are going to question them about what happened, and will make a statement later.”

But a Malteser International staff member said her group had removed the flag in order not to show favor toward one group over the other in the ethnic conflict in Rakhine.

“Our INGO is a nonpolitical organization, and we could face problems with the Myanmar government if we display this flag,” the staffer said, speaking on condition of anonymity.

Though extremists on both sides should be restrained, most INGOs now operating in the area have been strongly biased in favor of the Rohingya minority, said Khin Maung Swe, opposition National Democratic Force (NDF) chairman and member of a government commission looking into the causes of ethnic riots in Rakhine.

“What I saw when I was in Rakhine state with other commission members was that most INGOs have mainly been helping the Muslim community,” Soe said. “Ethnic Rakhines have been getting only 10 percent of their help.”

“Moreover, these groups have admitted they are giving more help to the Muslims,” he said.

“U.N. organizations and INGOs should consider treating both communities fairly,” Soe said, adding that both ethnic groups and the authorities should “try to work together and find the best way to live together in peace.”

Authorities have tightened a curfew in Sittwe while police said they had escorted some 71 aid workers from nine organizations to safety -- 32 foreigners and 39 Myanmar nationals, Agence France-Presse reported.

Malteser Country Coordinator Johannes Kaltenbach told AFP that almost all humanitarian and UN offices and warehouses in Sittwe were damaged or looted by the mobs in what he said was violence "planned in advance" to stop international groups facilitating an upcoming  census.

The U.S. meanwhile voiced “deep concern” at the mob violence, noting that it had “resulted in [the] destruction of property and the emergency relocation of international aid workers, including at least three U.S. citizens, to safe havens.”

“Unhindered and regular humanitarian efforts to communities in need and the safety and security of humanitarian aid workers to ensure the delivery of those services is critical,” State Department spokesperson Marie Harf said.

“Despite some efforts by local authorities to ensure the security of humanitarian workers, we remain deeply concerned about the continued lack of adequate security forces and rule of law on the ground there [Sittwe] and in Rakhine State more broadly, and to prevent the outbreak and spread of violence and to protect aid workers, their offices, and other vulnerable populations in the area.”

Last month, medical aid group Doctors Without Borders (MSF) was expelled from Rakhine following a series of protests, putting the fate of tens of thousands of Rohingya in jeopardy.

OK ..so call NGOs and INGOs load of craps. ” its fine, its oaky ,if you don’t want to help us but please don’t try to disturb us “.Everybody had already known the only reason you were there is not to help our peoples but to support pro-Wahhabi Bengali terrorist scum and SELL and distribute false, bias information , making our Rakhine ethnics to become villain in the world sight . So, seriously Propagators the only option you crooks have to do is packing everything up and get the [...] out of our land immediately and never come back cos nobody want you here you pro-terrorist dogs.