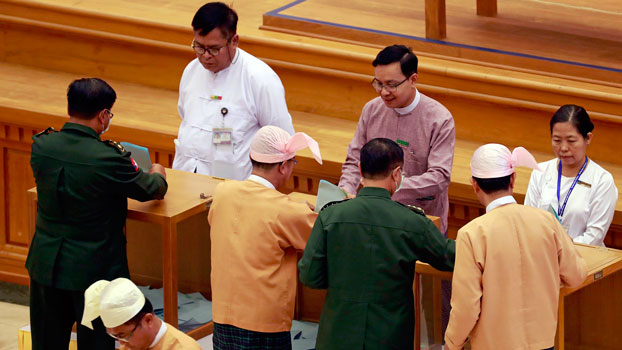 Lawmakers from the Myanmar military and the National League for Democracy party cast votes on bills to amend the 2008 constitution at the national parliament in Naypyidaw, March 10, 2020.
Associated Press

Myanmar’s ruling party lawmakers on Tuesday rejected an opposition party-sponsored bill to amend the constitution to allow chief ministers in ethnic minority regions to be elected, rather than appointed by the country's president, legislators said.

Military-appointed and ethnic parliamentarians supported the measure proposed by the main opposition Union Solidarity and Development Party (USDP) on the sixth day of voting on changes to the charter.

The bill submitted by USDP lawmaker Thein Tun called for amending Article 261(b), which gives the president the power to appoint chief ministers in Myanmar’s 14 states and regions.

But it failed to receive more than 75 percent of all votes that it needed to pass.

At Tuesday’s session, 631 lawmakers cast ballots on the measure, while 23 were on leave. The bill received 239 votes in favor, and 388 objections, with four disqualifications.

Some lawmakers said they believe that their NLD colleagues voted in unison against the bill, while MPs from the USDP, Arakan National Party (ANP), and the military all voted in favor of it.

ANP lawmaker Pe Than from the lower house of parliament said NLD lawmakers who rejected the change determined the outcome of the ballot, making it clear that the party opposes political decentralization.

“It is ironic that a major democratic party is rejecting all attempts at decentralization,” he said. “It is tragic for our ethnic minorities because they are not allowing us to experience the essence of federalism. This has become a major roadblock in the long journey ahead.”

NLD lawmaker Myat Nyana Soe from parliament’s upper house told the media that the measure failed to pass because the party previously sought to pass the measure in conjunction with a proposal to reduce the number of military MPs, who are appointed to one-fourth of the seats in the assembly.

“These ballots are being cast by the free will of individual MPs,” he said. “The results could change any time.”

“We believe that if we want to create a federal democratic union, amending Article 261(b) is crucial for ethnic groups and ethnic parties who cannot compete with the major parties in elections,” he said. “It is essential to change it if we really want to proceed with the sharing of power with regional governments.”

“It now has become a trend that the NLD will reject all bills sponsored by other parties, and MPs from all other parties will do the same with NLD-sponsored bills,” he said.

“It also has disrupted the trust and understanding between parties,” he added. “If the NLD wants to try this again, it will take it a long time to rebuild that trust.”

A bill submitted by military MP Brigadier General Maung Maung to change the required qualifications for government ministers at the national, state, and regional levels also failed to pass on Tuesday.

The measure would have barred candidates with foreign citizens in their immediate families from becoming central government ministers or chief ministers in states and regions.

“In order for us to so succeed with the passage of constitutional amendments, there should be trust-building between parties and factions,” he said. “It’s not good because the [NLD] is trying to push though changes with [its] majority vote.”

The NLD holds 59 percent of the seats in parliament, while ethnic parties hold 11 percent, and the USDP has 5 percent. Appointed military lawmakers hold a constitutionally-mandated 25 percent.

“Only by means of negotiations and inclusive brainstorming can we find a way that works,” Maung Maung said.

The NLD pledged to reform the constitution in the run-up to the November 2015 general elections, which it won by a landslide.

But its efforts to make democratic changes to the charter have largely been rejected this week by military and opposition party lawmakers, dashing the NLD’s hopes of fulfilling its campaign promise before the next general election at the end of 2020.