A publisher is jailed after his newspaper reports on alleged official corruption in Cambodia.
2009-07-16
Tweet 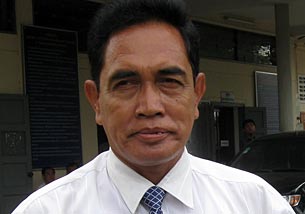 PHNOM PENH—Opposition newspaper publisher Hang Chakra, jailed for a year after publishing articles on alleged government corruption, is suffering in prison but plans to appeal his case, a source here said.

Hang Chakra is detained in Prey Sar Prison in a cell holding about 50 people, sources said.

He was arrested in Battambang on June 26 while he was in hiding—the same day a Phnom Penh court sentenced him in absentia to 12 months in prison and ordered a 9 million riels (U.S. $2,250) fine for alleged defamation and disinformation.

Am Sam Ath, head of an investigative team for the human rights group LICADHO, said his medical team had visited Hang Chakra and found him suffering from kidney problems.

“He is given medication for that. In addition, he appears stressed and worried,” Am Sam Ath said.

“His health is fine. But the important thing is what I should do in this case,” Chuong Chongny said.

“The court will send his documents to the appeals court, and I will defend him…I asked him if he still needed me, and he said he still needs me.”

Human Rights Watch this week urged Cambodian Prime Minister Hun Sen’s government to end what it called a “campaign of harassment, threats, and unwarranted legal action aimed at consolidating its rule by silencing the political opposition and peaceful critics.”

It also urged Cambodia’s international donors to press the government to stop its heavy-handed harassment of opposition members.

The National Assembly, further, voted to lift the parliamentary immunity of two of the opposition Sam Rainsy Party's (SRP) most active members, paving the way to try them on criminal charges of defamation against Hun Sen and 22 military officials, respectively.

All the recent lawsuits were filed under Articles 62 and 63, new laws which address disinformation and defamation and libel, Human Rights Watch said.

Original reporting by Serey To for RFA's Khmer service. Khmer service director: Sos Kem. Written for the Web in English by Sarah Jackson-Han.