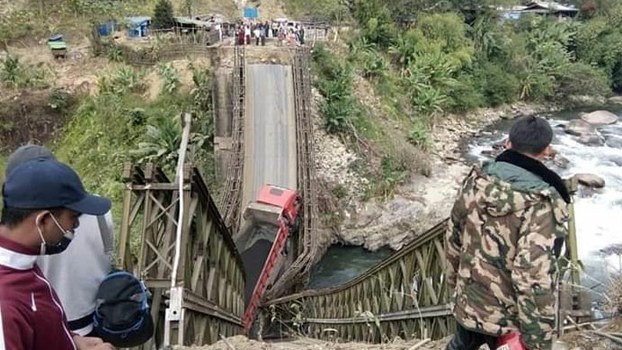 The scene after trucks carrying ore bound for China plunged into the Irawaddy River on the highway connecting Myitkyina, the capital of Myanmar's Kachin State, and the Chinese border, Dec. 14, 2018.

A bridge on Myanmar’s border with China collapsed on Friday as a convoy of trucks loaded with rare earth mineral ore crossed, sending one vehicle plunging into the Irawaddy River and cutting off a key trade route between the two countries.

"A convoy of four big trucks carrying ore-rich earth was crossing the bridge and it collapsed right in the middle as the last one was crossing,” Aik Kyar, an eyewitness, told RFA’s Myanmar Service.

“The driver of the truck sustained minor injuries but escaped death. The trucks were carrying rare-earth mineral ore to China," he added.

The bridge was near Sadung Waterfall, a scenic spot on the Irawaddy River on the highway connecting Myitkyina, the capital of Kachin State, and the Chinese border.

Heavy truck traffic on the highway has been an irritant for local residents, against a broader concern among Myanmar citizens about Chinese exploitation of Myanmar’s natural resources.

"Even though they are carrying ore-rich soil, our state government has no control on the permits. We can only tax them,” Kachin State Minister of Environment and Mines H. Hla Aung told RFA.

“The permits were given by the trade department of the central government because this concerns import and export regulations," he added.

“What I know is these trucks are taking away these chunks of earth every day from a site near Myitkyina. I don’t know how much of a role the Kachin state government has in this, but these people (the Chinese) have been working at what said to be a test site,” he added.

The bridge that collapsed on Friday was temporary structure built to replace one destroyed by Kachin Independence Army insurgents in 2012. It was not meant to hold up under heavy traffic from large trucks, a local observer said.