Myanmar to Appeal Verdict Against Migrant Workers in Thailand 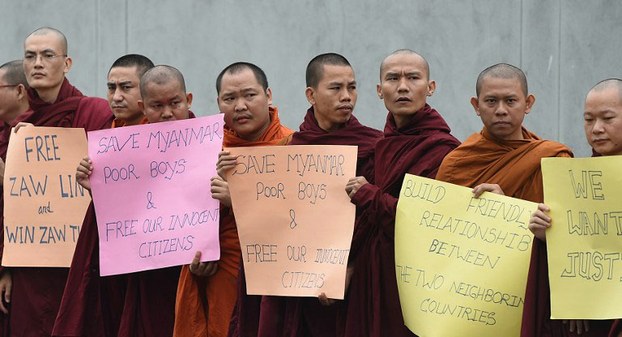 Myanmar says it will formally appeal the verdict against two migrant workers from the country sentenced to death in Thailand last week for the 2014 murder of a British couple at a Thai resort, citing the chance that conflicting evidence may be uncovered in a case that has drawn protests in Myanmar’s major cities .

Zaw Lin and Win Zaw Tun, both aged 22, were sentenced to death by a Thai court on Dec. 24 after being found guilty of the murder of David Miller, 24, and the rape and murder of Hannah Witheridge, 23, on the resort island of Koh Tao in September 2014.

Though the two men at first admitted to the crime, they later recanted, saying they had made their confession under duress.  Hundreds have meanwhile staged protests across the region calling for the pair to be freed, saying the men are scapegoats in a botched Thai police investigation of the crime.

A Myanmar government legal team will now appeal the verdict against the men at a court in the Thai capital Bangkok, a team representative told RFA’s Myanmar Service.

“We will see if there is conflicting evidence or conflicting testimony from witnesses, or if any new witnesses have come forward since the last hearings, and we will submit all this to the court,” Aung Myo Thant, a lawyer from the Myanmar Embassy’s Representative Team in Bangkok said.

“If we find these things, we will have the right to ask for a new trial to be carried out again from the beginning,” Aung Myo Thant said, adding, “We will cooperate with others in our work on this case.”

Though any appeal must be filed within 30 days, Myanmar’s lawyers will request an extension of the deadline if necessary, he said.

Protests meanwhile continued in Myanmar for a fourth straight day, with marchers in the cities of Mandalay and Myawaddy and the towns of Kawthaung and Mawlamyaing holding up posters bearing images of the convicted men and slogans calling for “justice” in the case.

The verdicts against the two convicted workers can still be appealed in “a higher court,” San Tun Aung, a Mandalay protester and lawyer unconnected to the case, said.

“Right now, international leaders including our own leaders have been asking Thailand’s king to review the case, and I believe he will do this,” he said.

“We want the Thai court to investigate this case and come to a new decision.”

The September 2014 murders of the two British backpackers, whose battered bodies were discovered on the beach at Koh Tao shortly after their deaths, cast a shadow over Thailand’s reputation as a safe playground for foreign tourists and brought police under strong pressure to quickly solve the case.

Thailand hosts large numbers of citizens from Myanmar, including migrant workers and mostly ethnic minority refugees who fled war and repression under the military regime that controlled the former Burma in previous decades.