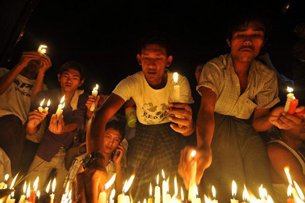 Demonstrators hold a candlelight protest at Sule Paya Pagoda in Rangoon, May 23, 2012.
AFP

Burma’s Election Commission held roundtable talks Tuesday with representatives from the country’s six major political parties to address a recent string of protests over electricity shortages and workers’ rights, according to an opposition lawmaker in attendance.

Ohn Kyaing, a member of parliament for Nobel laureate Aung San Suu Kyi’s National League for Democracy (NLD) party, said the head of the commission called on the opposition parties to assist in finding an acceptable solution to the demands of thousands of demonstrators protesting in some of the country’s biggest cities, including Rangoon and Mandalay.

"The Election Commission chairman explained in the meeting that the government is trying to resolve the candlelight protests in Mandalay over electricity shortages and the factory workers' strikes in the Rangoon Industrial Zone where workers are calling for pay raises,” Ohn Kyaing told RFA’s Burmese service on Tuesday.

“He requested that the other political parties help solve the problem of power shortages.”

Burma’s deputy labor minister and deputy minister of energy were also in attendance, Ohn Kyaing said, and discussed the work that they had done to mitigate the energy shortages.

"The labor minister said that he had facilitated mediations [between workers and factory owners],” Ohn Kyaing said.

More than 5,000 workers from five different factories in Rangoon’s Hlaing Tharyar Industrial Zone have been striking for two weeks, demanding a wage hike from 15,000 kyat (U.S. $18) per month to 30,000 kyat (U.S. $36) per month, which their employers have so far refused to pay.

And in Mandalay, Rangoon, and several other cities, demonstrators have been demanding a larger allocation of the national budget to end chronic power cuts. Continuing protests since May 20 have effectively forced the government to announce emergency measures aimed at restoring electricity to full capacity within weeks.

“The energy deputy minister talked about the state’s current energy output and how much is energy is being consumed,” Ohn Kyaing said.

“He explained that, due to a late monsoon season, the hydropower plants do not have enough power to run at full capacity.”

Ohn Kyaing said that the energy deputy minister also discussed the status of electricity towers that had been damaged in fighting between the Burmese army and Kachin ethnic rebels in the country’s border area with China, which officials say has seriously limited the capacity of the national power grid.

“He explained that though the government is doing its best to subsidize the lost energy with gas and coal, these efforts remain insufficient.”

Ohn Kyaing did not provide details on what suggestions, if any, had been raised by the opposition party members in attendance.

Meanwhile, as energy shortage protests continued around the country, authorities in Pathein held 11 youth who had been leading nightly demonstrations since Friday and questioned them for three hours at a local ministry office, a relative of one of those detained told RFA.

"They were asked why they were protesting, what they wanted the authorities to do, if they were following the lead of demonstrators in other towns or protesting of their own volition, who had instructed them to protest, and so on,” the relative said.

“They were questioned one by one. The district police chief and officers from the Department of Electricity were among the officials who questioned them.”

Among the youth detained were members of the 88 Generation Students Group, a movement formed by activists that were part of student-led protests against Burma’s former military regime in 1988, and members of the NLD.

“One of the youth from the 88 Generation Students Group replied that they are not protesting, but peacefully requesting that the government provide them with adequate electricity,” the relative said.

“The youth explained that they were not instructed to join the demonstration by others—that it was their own idea.”

After the questioning, the detainees were released and officials pledged to fully restore electricity to the region within two weeks.

Protests are extremely rare in Burma and represent a test for the nominally civilian government of reformist President Thein Sein, which took power in March last year after five decades of military rule.

Thein Sein approved a bill last year which allows for peaceful protests, and so far authorities have allowed the demonstrations to continue with little resistance.

Reported by RFA’s Burmese service. Translated by Khin May Zaw. Written in English by Clara Bradford.