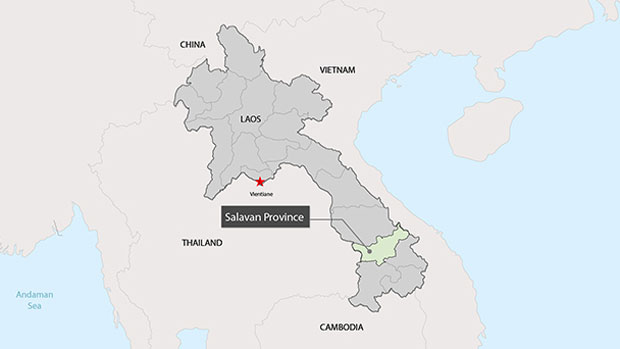 A map showing the location of Salavan province in Laos.
RFA

A Lao villager held in jail since 2011 as a leader of a land protest in the country’s Salavan province has died in custody, with officials citing natural causes but villagers fearing torture, sources in the country say.

Sy Phong, one of two men kept in jail after 23 other protesters had been released, had been held without trial and died in April, a local source told RFA’s Lao Service this week.

His death in custody was revealed when prison officials called family members to pick up his body for religious observances and cremation, RFA’s source said, speaking on condition of anonymity.

“Villagers want to know how he died,” the source said.

Sy Phong and another accused leader, Som Nuk, had protested outside district offices with a group of 25 residents of Salavan’s Dane Nhai village to call for the return of land given by the government to a Vietnamese company to grow eucalyptus trees, the source said.

Police later came at night to arrest those who had taken part, falsely accusing them of using violence during the protest, he said.

“Most were freed after being held in jail for two or three months, but two of their leaders—Sy Phong and Som Nuk—were not released,” he said, adding, “Now, Sy Phong is dead, and villagers want to know why.”

Contacted by RFA, a local official confirmed the now eight-year-old arrests and jailing of the accused protest leaders, but said the two men had not been jailed because of a protest over land.

“Som Nuk and Sy Phong were arrested not because of a land dispute, but because they had joined with “overseas Lao” in a plot to overthrow the government,” the official said, also speaking on condition he not be named.

'Not against the government'

Also speaking to RFA, a Dane Nhai villager said however that the men had protested only because they did not want their land taken away to be used as a concession.

“They were not acting against the government,” he said, adding that he and others believe that Sy Phong had died as a result of torture in jail.

Reached for comment, the deputy district mayor for the area refused to discuss the case, while the deputy governor for Salavan province said he would contact local officials to learn what had happened.

The seizure of land for development or agricultural use—often without due process or fair compensation for displaced residents—has been a major cause of protest in Laos and other authoritarian Asian countries, including Cambodia and Myanmar.

In July 2017, 15 residents of Yeub village in the Sekong province of Laos were taken into custody for obstructing workers and cutting down trees on their former land, which had been given by the government to a Vietnamese rubber company.

Several of those detained were beaten or subjected to electric shocks in the days following their arrest, with another later reported to have died in custody.

Reported and translated by Sidney Khotpanya for RFA’s Lao Service. Written in English by Richard Finney.

Villagers want to know how he died ? If he was not fed and was made a slave while in prison it's quite easy to understand how he died.

May he rest in peace in the kingdom of everlasting of his belief. And may his death touch the heart of those whose making the decision on behalf of citizen livelihood to let them be fair and just to the peoples. Most of the concessions are benefit less or none to the local peoples: Low wages(if employed), Environmental destruction and reduces farmland.