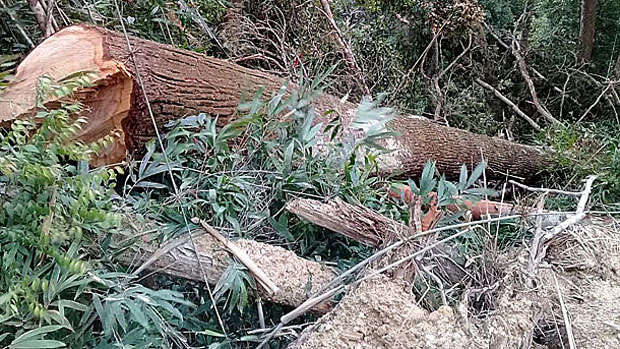 A section of timber felled by smugglers in Laos's Xesap forest is shown in a May 2018 photo.
Photo sent by an RFA listener

Loggers working under the protection of local authorities in Laos have cut a road into a protected forest area in the country’s Sekong province bordering Vietnam, just a short distance from the border, an official charged with monitoring the illegal trade in timber says.

Discovery of the road, built from April to May this year by a Vietnamese businessman in collusion with local officials, alerted central government authorities to the operation in the Xesap conservation forest, bringing the smuggling to a close, the official told RFA’s Lao Service on June 27.

“The logging was carried out near Tungtalang village in Sekong’s Darkcheung district,” RFA’s source said, speaking on condition of anonymity.

“The logs were sawed into pieces before being taken into Vietnam, which is only 2 km away,” the source said.

During government inspections earlier this year, around 3,000 cubic meters of illegally harvested logs seized two years ago by government officials in the same district were found to have been removed, the same source said.

Speaking earlier in June to RFA, vice governor for the province Leklay Sivilay denied reports of logging in the conservation zone, dismissing the stories as "rumors spread by bad people.”

“Central government officials and I constantly monitor and inspect for logging in the district,” Sivilay said.

“There is no smuggling going on here,” he said.

According to an annual survey of corruption for 2017 by the watchdog group Transparency International, Laos ranks 135 out of 189 countries, a fall in rank from a higher score of 123 the previous year.

“There is more corruption now because the government inspects only ‘small fish,’ not ‘big fish,’” a senior Lao official told RFA in an earlier report, speaking on condition of anonymity.

Most timber illegally harvested in Laos is obtained through conversion forestry--clearing areas marked for the development of infrastructure projects such as hydropower dams, road building, and mining operations--which is used as an excuse for large-scale logging that otherwise that otherwise would not be permitted under Lao law.

“Central government officials and I constantly monitor and inspect for logging in the district,” Sivilay said.