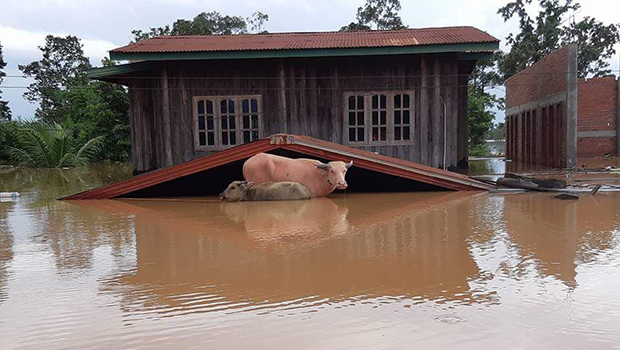 Buffaloes on the roof of a house in the flooded Sanamxay District, Attapeu Province on July 24, 2018.
Photo courtesy of an RFA listener

Rice shortages are the latest setback in Laos’ relief efforts for victims of the country’s worst flood disaster in decades.

The rupture of a dam in July inundated 12 villages and killed at least 43 people in Champassak and Attapeu provinces, leaving hundreds more missing. Now up to 3,000 victims are facing hardship as relief rice is running out.

“We don’t have enough rice to distribute to the victims,” a labor and social welfare official in Attapeu’s Sanamxay district told RFA’s Lao Service on Friday.

“Our rice stocks are running low, so we haven’t been able to distribute December rations to a lot of the victims,” the official said, speaking on condition of anonymity.

The official said that the district has reported the shortage to the central government, but there has not been any response yet.

On Dec. 20, a victim living in one of Sanamxay’s temporary shelters posted on social media that many families in the area were running out of rice because village leaders were keeping the rice in their own homes without distributing it to villagers.

Asked about the shortfalls, District Governmor Bounhome Phoummasane told RFA on Friday: “We’ve distributed all the rice for the month of December as planned.”

“Whether we have enough rice for next month, I don’t know yet. We’ve submitted the request to the province, and I think they’ve forwarded that request to the [central] government,” the district governor said.

Phoummasane said that the victims aren’t suffering major hardships while in their temporary living situations.

“They, the villagers, have everything [they need] except independence,” he said.

The food shortage comes on top of other problems with relief efforts. Many of the victims were promised living stipends of about $12 a month, but some have not received the stipend in months.

Other victims have reported there is little access to clean drinking water and shortages of water needed for irrigation during the dry season.

Meanwhile, infrastructure damaged by the floodwaters remains in disrepair, making some villages inaccessible.

Now the hardest part of the game has just started. Rice fields were distroyed by flood after dam fell apart.I pray for you Lao people that you'll have enough rice to feed your families.

They won't have Rice shortages if The money Disaster Fund from Foreign countries gave to them did not go to high ranking LAO GOVERNMENT. Where are those money? NOBODY KNOWS.