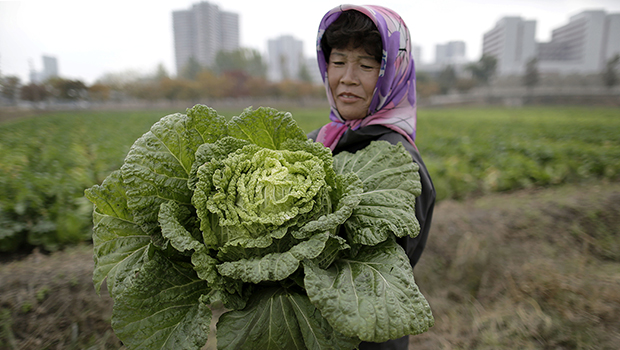 A farmer carries a fully grown cabbage at a farm on the outskirts of Pyongyang.
AP

North Koreans are scrambling for discarded cabbages and radishes this traditional kimchi making season after a series of typhoons pounded the country and created shortages of the key vegetables, sources in the country told RFA.

Each autumn on the Korean peninsula, demand for napa cabbage and radishes spike as friends and family gather for gimjang, the labor-intensive work of preparing the celebrated fermented vegetable for winter.

But poor crop yields, combined with farmland damaged by floods and typhoons, have made cabbages and radishes hard to come by this year, and people in North Korea are simply giving up on making kimchi, sources in the region said.

Once the vegetables are harvested, they are immediately routed to the military and other government agencies, leaving the people empty-handed, sources said.

“Residents are busy visiting farms and local markets to get ingredients. They are trying their hardest to find even the outer leaves of the cabbage that people usually discard because they aren’t as fresh,” a resident of North Hamgyong province in the country’s northeast told RFA’s Korean Service Sunday.

“Vegetable farming has been less than successful this year, so the price of kimchi ingredients has gone up, especially due to the typhoon and flood damage,” said the source, who requested anonymity for security reasons.

The source said fresh cabbages and radishes can be found, but the average person has no access to them.

“On the road you can see truckloads of fresh cabbages and radishes, but they are going into the military’s kimchi or to the major national agencies,” said the source.

“Those of us who work in small factories or who have no money or power have to search high and low in the local markets,” the source said.

Cabbage prices in North Korea have risen about 25 percent compared to last year to about 500 won (U.S. $0.06) per kilogram, making a large batch of kimchi cost more than a government-provided monthly salary which, according to South Korea’s Joongang Daily newspaper, amounted to 4,000 won in 2018.

“Many people are simply giving up on making kimchi entirely because they can’t get the ingredients,” the North Hamgyong resident said.

Another source, a resident of neighboring Ryanggang province, confirmed to RFA Monday that there were cabbage shortages there as well.

“These days, people are flocking to the farms and it looks like there are more people than cabbages,” said the second source, who requested anonymity to speak freely.

“The best vegetables in the field at the model vegetable cooperative farm in the province are reserved for the military,” said the second source.

The second source said that on some of the farms, the people are asking the farmers if they can get the parts of the vegetables that are normally discarded.

“People are competing to get the outer leaves of cabbages or radish leaves and stems usually thrown away by the farmers after the autumn harvest,” the second source said.

The kimchi shortfall comes amid dire economic circumstances in North Korea in 2020, as a result of the Sino-Korean border and the suspension of all trade with China as part of measure to control the coronavirus pandemic.