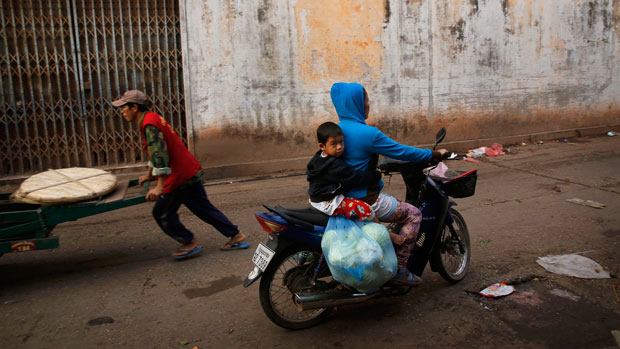 Lao woman rides with her son after shopping at a morning market in Vientiane in a file photo.
AP

Prices for essential foods have recently surged in village markets in Laos despite growing levels of unemployment due to business closings to prevent the spread of coronavirus, sources in the one-party communist state say.

For vegetables used in everyday meals, such as green onions, cilantro, chili peppers, and eggplant, prices have almost doubled, a villager living close to a market in the Lao capital Vientiane said, speaking to RFA’s Lao Service.

“Everything is going up,” the woman said, speaking on condition of anonymity.

“We would like the government to investigate the rise in these prices, since many people have no jobs now and have no money like they had before the outbreak of COVID-19,” she said.

Annual per capita GDP in Laos is about $2,500, similar to Vietnam and about one-third that of Thailand.

In the northern province of Luang Prabang, the price of vegetables at the Phou Sy market has climbed two to three times higher in the last week alone, and shoppers must now buy their vegetables in bundles rather than kilos, another villager said.

“It’s the rainy season now, and the price of green onions and cilantro has climbed from a cheap price of about 1,000 kip per bunch to about two to three thousand kip per bunch,” the villager said, adding that prices had shot up only in the last two to three weeks.

In Xieng Khouang province in the country’s northeast, the price of string beans has now doubled, with a kilo that formerly cost 6,000 kip now costing 12,000 kip, another source said. And a vegetable popularly eaten with beef salad has now climbed in price from 8,000 to 15,000 kip per kilo.

“Another vegetable that people like to add to their soup is more expensive than before, and is not available in the markets,” the source said.

“This is now the rainy season, and people are farming,” he said, adding, “They have no time to look for vegetables in the forest, and this is why they are in short supply in the markets.”

Reached for comment, an official at the Lao Ministry of Agriculture said it is difficult to control the cost of vegetables and other essential goods in the markets, as prices will rise and fall according to the law of supply and demand.

“The government can control the meat market, not allowing prices to climb to more than 45,000 kip per kilo [of pork], but it’s harder to control fluctuations in the price of vegetables,” he said.

“The only solution is to not allow food to be imported from neighboring countries.”

Meanwhile, a merchant at a market in Vientiane said that as a small vendor, she buys vegetables from middlemen whose prices for cilantro have doubled from around 30,000-35,000 kip to from 60,000 to 70,000 kip per basket.

“Therefore, I have to reduce the quantities I sell by putting them in bunches just to make a profit,” she said.

A vegetable grower in Vientiane meanwhile blamed the recent surge in prices on the country’s rainy season, when vegetables are in short supply because they can’t be harvested quickly and often spoil in the fields.

“Vegetables like cold weather, mostly in the months of October and November,” she said, adding in comparison that during the rainy season, the price of fruit begins to fall.

“The price of vegetables will go down again in two to three months’ time when the weather gets warmer again, and growers can produce more. Consumers should understand this,” she said.