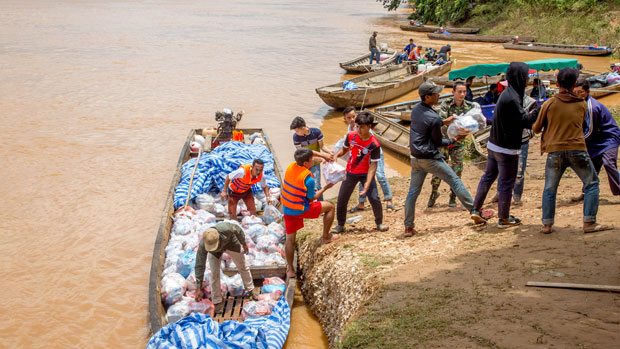 Volunteers unload food and other supplies for victims of a flood caused by a hydro power dam burst to a relief station at Sanamxay in southern Laos' Attapeu Province, Aug. 1, 2018.
RFA

More than 580,000 people have been impacted and at least 28 have died in floods caused by heavy rains over the past two weeks in Laos’ southern provinces, according to estimates revised during a cabinet meeting this week. The death toll figure was reported by the Vientiane Times Thursday.

The floods are a result of Tropical storm Podul and tropical depression Kajiki slamming into the area one after the other. As the waters grew higher and higher, roads became submerged, cutting people off from government-led rescue and relief efforts.

The Jakarta-based ASEAN Humanitarian Assistance Center (AHA Center), reported on September 10 that around 100,000 people have been displaced.

The waters have receded and the authorities are assessing damages.

In Salavan province, one of the worst affected, an official from the provincial public works and transport department told RFA’s Lao Service about the costs for replacing damaged roads in his province.

“According to our assessment, the total loss and damage would amount to $50 million,” the official said, adding that National Highway 15A is severely damaged with 3 broken bridges.

“For the roads and bridges alone, we need at least $6 million for repairs,” the official said.

Meanwhile in Attapeu province, 86 villages are flooded, affecting over 60,000 residents. The floods destroyed nearly all of the province’s newly planted-rice fields.

“It’s all flooded. Rice fields, everything, it’s all ruined,” said a provincial official.

In the southwesternmost province of Champassak, 69 schools were flooded, with a total loss of all teaching and learning materials.

“It’s all gone. The teaching materials, the text books and even black boards are all damaged.”

After Monday’s cabinet meeting, Government Spokesperson Chaleun Yiapaoher explained to local media how authorities were responding to the crisis.

“The government has mobilized all our resources from different ministries, the national defense and security forces, and provincial authorities to assist the impacted communities. This has [had an effect of] reducing [potential] losses,” he said.

Salavan’s provincial energy and mine department was working to restore power.

“So far we were able to get power back to 100 percent in two districts. In the third, we’ll finish our repairs in a couple of days,” said a department official.

But in many places, aid has not been able to reach survivors, and when it has arrived it has often been not sufficient.

“We’ve received some aid but it’s not enough; people in many places haven’t received it at all. The reason might be that the roads are all cut off,” said a Salavan resident.

A villager in Attapeu province’s Sanamxay district said the villagers in that area were in dire need of emergency food supplies.

“We need a lot of food, especially rice, canned fish and dry food for 38 villages,” the villager said.

The head of Attapeu province’s administration office, Vienxay Xaysombath said the whole province was in need of food. He said that even though the waters have receded, Attapeu still needed about 150 tons of food aid.

The AHA Center reported on September 12, 2019 that the Lao government allocated $134,000 for relief and aid missions for the flood victims.