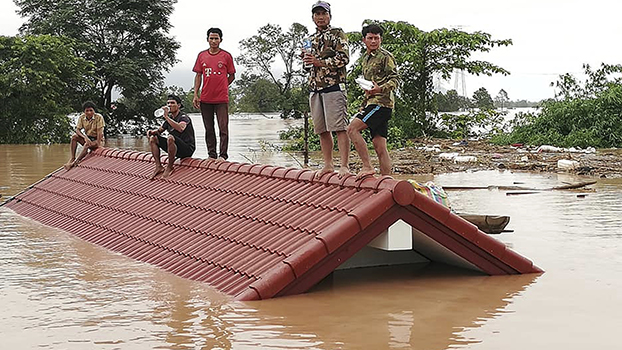 In this Tuesday, July 24, 2018, photo, villagers take refuge on a rooftop above flood waters from a collapsed dam in Attapeu province in southeastern Laos.
Attapeu Today via AP

Tropical storm Podul and tropical depression Kajiki slammed into the area one after the other last week, dumping and estimated 40 centimeters of rain in parts of southern Laos.

Flooding has affected the lives of 572,000 people and caused considerable damage to buildings and farmland, according to estimates by the ASEAN Coordinating Center for Humanitarian Assistance.

Hundreds of schools have been closed as 102,000 people have been displaced and 150,000 hectares of farmland have been lost. Many roads are inaccessible and at least 37 houses have been damaged as well.

Laos’ central and provincial governments have made efforts to help flood victims move to higher ground, while using boats and helicopters to deliver food and drinking water, but some local authorities and affected villagers confirmed in interviews with RFA’s Lao Service that aid still isn’t reaching many locations inaccessible by road traffic.

“It’s difficult to send aid to the victims because the roads are heavily flooded and many of the roads are cut off as bridges collapse,” said an official of Savannakhet province’s Champhone district.

A relocated resident of the district described losing a home to the flood waters.

“It’s all flooded. We have no place to live. Our house is under five meters of water. For now, we must live with a relative on higher ground,” the resident told RFA.

“The whole district is flooded. In some places, the water is ten meters high. At least 9 villagers cannot be reached at all,” a local official told RFA.

An official in nearby Songkhone district said the flooding has heavily affected his district.

“All 36 villages are flooded. Residents in 9 villages are completely cut off from the outside,” the official said.

“But in other villages the authorities have distributed dry food, drinking water and other necessities,” added the official.

A resident of Sekong province’s Sedone district told RFA that the waters were beginning to recede there.

“But the damage is so great. Our rice fields and homes in many villages are all destroyed. [There is no] power and roads have been cut off,” the Sedone resident said.

A provincial official confirmed that aid is not reaching some of the villages in the province.

“We can’t reach nine villages that are seriously flooded; we use helicopter to deliver food only to 38 villages,” said the official.

Champassak, Laos’ most southwestern province, has been the worst hit, with one-third of the affected people living there.

An official of Pakse, the province’s most populous city, described the situation to RFA on September 5.

“Roads, banks and highway 13 are all flooded. We are now evacuating people but we won’t have time to get them all because the water is coming so fast,” the official said.

Just north of Champassak in Salavan province, 75 villages have been inundated, with 40 cut off from the outside.

“We’re meeting with officials from the central government about how to distribute aid to the affected areas,” said a provincial official.

Meanwhile an official in Attapeu province said authorities were able to send aid to only 36 of the province’s 91 affected villages.

In total, not even half of the flood victims are receiving aid because authorities lack rescue vehicles like boats and helicopters as roads remain inaccessible.

Flood victims also being hit by rising food prices, which trace back to floods that occurred last year. The current situation is driving up prices even more.

Salavan’s trade department confirmed that the price of dry noodles, rice, chicken and eggs have increased.

A Champassak retailer said, “Because we are so short on supply, we are selling products for a little bit more”

Authorities have ordered stores not to raise prices over the last couple of days.

Prior to the severe flooding, the Mekong river region had been enduring a prolonged drought that had lasted since the beginning of this year and continued well into what should have been the rainy season.

Brian Eyler, the Southeast Asia Program Director for the Stimson Center, told RFA’s Vietnamese Service in July that the effects of the drought were exacerbated by an El Niño weather effect, climate change, and dams on the Mekong holding back water.

Eyler told RFA’s Lao Service Wednesday that some of these factors have also exacerbated the floods.

“Climate change predictions suggest increased intensity of storms during the shortened monsoon seasons and we might be seeing this play out now,” said Eyler.

But there were weather abnormalities associated with this year’s flood.

“Another indicator of increased storm intensity is that those late August storms, which typically dissipate by the time they reach the Thai-Lao border, continued into northeastern Thailand and dumped an abnormal amount of rain in the Mekong’s Mun-Chi Basin,” Eyler said.

“Above Pakse, all of the runoff from both sides of the Mekong came together to deliver massive floods to the Pakse area. This is also uncommon,” he added.

Eyler said the long drought, followed by the severe floods should provide a lesson to national and local governments to be prepared for both.

“The 2019 drought was entirely predictable and thus there are ways to reduce vulnerabilities months in advance of the most difficult times when drought hits hardest,” he said.

“[The problem] will likely require some difficult decision making about where people choose to settle and how rural and urban people carry out their livelihoods in the Mekong region,” Eyler said.

Reported and Translated by RFA’s Lao Service. Written in English by Eugene Whong.

I don't think Some Foreigners Investors have any ideas when they Bought a lot of Land in Laos and Hope to resell for a profit in very high price. DO YOU KNOW LAOS HAVE FLOODS SEASON FOR GENERATION AND THEY HAVE FLOODS EVERY YEAR TO WASH DOWN YOUR INVESTMENT IN THE FLOODS