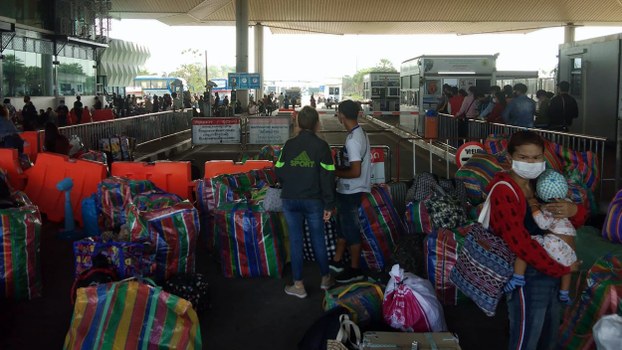 People wait at the immigration post by the second Thai-Lao Friendship Bridge in Mukdahan, as the border crossing was being closed due to concerns over the spread of the COVID-19 coronavirus, March 23, 2020.

The number of cases of coronavirus infection in Laos have doubled overnight, an official with the country’s Ministry of Health said Thursday, bringing the total to six, as the impoverished Southeast Asian nation braced itself for a potential epidemic within its borders.

The three new cases are people who had contact with existing patients confirmed to have the virus and the disease it causes (COVID-19) earlier this week, Deputy Minister of Health Dr. Phouthone Muang Pak told a press conference.

“We found three infected cases—these three cases are new,” he said. “They were infected because they had close contact with infected persons.”

According to Phouthone, the new cases include two male tour bus drivers, aged 42 and 52, from Luang Prabang city who had close contact with a female, aged 36, who works as a guide for European tourists and was confirmed as one of the country’s first two infections on Tuesday, along with a 28-year-old male working in management at the Crowne Plaza Hotel in the capital Vientiane.

The third new case—a 41-year-old male in Vientiane—had close contact with a 26-year-old male businessman who on Wednesday was confirmed as the third case and had become infected after having dinner with the Crowne Plaza Hotel employee, Phouthone said.

A worker at the Luang Prabang Ministry of Health confirmed the new infections in a call with RFA’s Lao Service Thursday.

“We’ve taken them to the hospital,” the worker said, adding that local authorities “have also asked them where they had been, with whom, and where.”

A resident of one of the villages in Luang Prabang where one of the two new cases is from, told RFA on condition of anonymity that authorities had already begun interviewing people who live there about whether they had been in contact with the infected person.

“I have closed my restaurant and already sent my family to live in our farm in the suburbs,” the resident said.

Meanwhile, residents of Vientiane told RFA Thursday that with the number of cases rising, people have begun hoarding food.

“Many people have bought food in bulk, such as rice and other dry foods, and stocked it at home,” said one resident, who declined to be named.

Another resident complained that supermarkets are seizing on the opportunity to raise prices.

“The authorities should have strict measures in place,” the resident said.

A trade official in the capital told RFA that authorities are preparing to issue a ban on price increases, “especially the price of beef, fish, and housewares.”

Price gouging has also sent shockwaves through neighboring Cambodia, where authorities have confirmed 96 cases of COVID-19, with villagers expressing concern over an inability to afford surgical masks to help prevent transmission of the coronavirus.

A vendor in Phnom Penh named Nib Soeurng told RFA’s Khmer Service that mask prices are soaring and said she has seen no government intervention, leaving retailers unable to afford them and forcing members of the public to use hats and scarves to cover their faces.

“It is hard for us to buy masks,” she said, adding that a good mask can cost U.S. $1.50—far above what average wage earners can afford.

On Wednesday, Prime Minister Hun Sen said that anyone caught price gouging will be punished and will be banned from doing business “for life.”

“We know that it is hard to buy masks now—I am investigating legal actions,” he said.

“We will confiscate all masks that are overpriced. If people don’t drop the prices, the government will use its iron fist. We will not only confiscate and stop your businesses, but you will be banned from doing business for life.”

Myanmar on Thursday struggled to deal with its own outbreak following the announcement of a third case in the country earlier this week.

More than 30 civil society organizations (CSOs) and more than 300 villagers in Kachin state signed a petition urging Myanmar’s President Win Myint to shutter checkpoints along the border with China, where the coronavirus outbreak originated.

Speaking at a press conference in the Kachin state capital Myitkyina, Bran Aung, program manager for the CSO Green Rays said the groups and villagers had signed the petition to close the border checkpoints “because the virus can be spread via Chinese travelers.”

Green Rays and the other CSOs that signed the petition said that the government must also thoroughly check all trucks carrying freight across the border, regardless of the time of day, test the health of undocumented Chinese migrant workers in the state’s banana plantations, and implement stricter measures against illegal immigration.

They also called on the government to show greater transparency with regard to its preparation for combatting the coronavirus, more closely cooperate with CSOs, and systematically monitor Myanmar nationals who have traveled abroad.

Despite the demands, Kachin state authorities on Thursday insisted that the border would remain open “for trade.”

“The border will continue to stay open for trade,” Kachin state Minister of Labor and Immigration Zaw Win said. “The central government has not yet ordered the border closed.”

While Kachin state has yet to confirm a case of COVID-19, two people are being monitored in the region as suspected cases.

The confirmation of cases marks a sea change for Myanmar, where as recently as last week, government spokesman Zaw Htay suggested that “the lifestyle and diet” of the country’s citizens had helped to prevent any infections, while earlier this month, Health Ministry spokesperson Khin Khin Gyi said Myanmar was infection-free because of the relative distance of the virus’ epicenter in Wuhan, China.

Observers have questioned whether limited testing in Myanmar had caused officials to underestimate the risk of the coronavirus, and now that three cases have been confirmed, rural areas of the country are dangerously lacking in the resources and infrastructure needed to head off an outbreak that has sickened more than 529,000 people across the globe and left nearly 24,000 dead.

In Vietnam, where authorities have confirmed 153 cases, authorities have launched an offensive against free speech, with state media on Thursday announcing that the country’s Ministry of Public Security had punished more than 300 of 700 individuals for posting allegedly “fake news” on social media about the coronavirus in the first two months of the year.

Ministry spokesperson Nguyen Thanh Loi was quoted as saying that “hostile forces are using any opportunity to attack Vietnam’s government,” specifically referring to reports that Hanoi has been opaque about the spread of the virus and that the government’s response has been ineffective, “spreading panic amongst the people and driving them away from the [ruling Communist] party.”

Meanwhile, municipal authorities in Ho Chi Minh City on Thursday sought to quell public unease about reports that the city would be entering a 14-day lockdown period, calling them “rumors.”

Vietnam’s Ministry of Health on Monday ordered people not to leave their homes unless absolutely necessary, saying those who have been confirmed positive for COVID-19 were not quarantined in a timely manner and may have spread the virus to unwitting members of the community.

The ministry said it is working to determine who the patients may have had contact with in recent days.

Meanwhile, Vietnam’s key textile and garment industry could lose roughly 1.6 percent of its valuation if the outbreak of the coronavirus ends by June, the head of one of country’s largest state-owned textile firms said Thursday.

“Vietnam’s textile and garment industry could see losses of up to 11 trillion dong (U.S. $468 million) if the spread of the coronavirus is halted by the end of May and the economy can be restored in June,” Le Tien Tuong, the general director of Vinatex told a forum on combatting the outbreak in the capital Hanoi.

Le cited declining and canceled orders for April and May that he said are likely to result in a large shortage of jobs for laborers.

The textile and garment industry is one of Vietnam’s most important sectors, and was valued at U.S. $30 billion in 2017, according to the Vietnam Textile & Apparel Association.

Vietnam is recognized at the third top garment exporter globally, with apparel accounting for some 16 percent of the country’s exports annual. The sector employs around 2.5 million of Vietnam’s 90 million citizens.