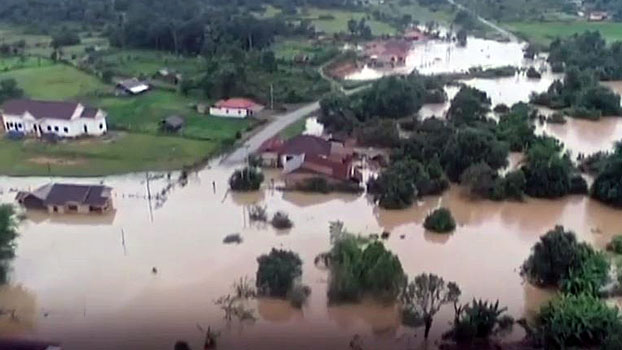 “Because of heavy rainfall and too much water, the dam couldn’t handle it, so it burst causing great losses and flooding 30 hectares (74 acres) of rice field and fish ponds,” said a villager who lives near the dam site.

Nearby Lad Boak village was completed flooded by the breach which occurred on Aug. 4, a second area resident said.

“This village has suffered a great loss,” said the man who declined to be named. “My parents’ two houses are badly damaged. Twenty-four families are the most affected. Ten other homes and 30 hectares of rice fields are also flooded.”

A third local, who is a tour operator, told RFA’s Lao Service that the Keng Khoune Dam broke when rising water levels pushed up against its walls and tore through both its sides, releasing torrents downstream.

The dam sits on an extension of the Nam Gneun River, a tributary of the Mekong River.

It was not immediately clear if the dam breach caused any loss of life.

State television in Xieng Khouang province aired a video of the dam break during which a reporter said that heavy and continuous rainfall over the past few days had eroded the structure's walls, causing them to give way.

The structure itself as well as its powerhouse and related heavy equipment have been badly damaged, with some components washed away and covered by mud, the reporter said.

Authorities are now assessing the amount of damage to the property of villagers who live just downstream of the dam. An initial estimate of the damage to the dam itself is between U.S. $400,000 and U.S. $470,000, he said.

In the video, the vice president of the Somphou Bridge and Road Construction Company, the dam's builder, denied that a breach had occurred and said that only her firm had suffered losses from the flooding.

“This was not a dam break; it was only water coming down so fast at once that the dam couldn’t release water fast enough,” she said. “But there has been no impact on or damages for people upstream or downstream. However, our loss is about U.S. $400,000.”

The executive, who was not identified in the report, said that rapidly rising water levels on the morning of Aug. 4 caused the None Reservoir to overflow.

During the breach, the dam stopped generating power for a while, then resumed, she said.

“In the beginning, the owner of the dam claimed that the destruction [involved] only the dam and not others,” she wrote in an email to RFA. “Later on, it was clear that there had been some impact to the agricultural land (and maybe other things) that belong to the people in the area.”

“The one-megawatt dam seems to have certainly caused bad problems for people downstream, but I don’t know to what extent,” she wrote.

An official form Xieng Khouang province’s Energy and Mines Department, who declined to be named because he is not authorized to speak with the media, told RFA that the dam was not made of concrete.

“It’s made of soil mixed with sand, not concrete,” he said. “It’s easily and quickly eroded by rain. That’s why it is damaged.”

A Pek district official told RFA that provincial authorities have inspected the site and given some advice to the company about what to do.

"[The] company is repairing the water channel and has cleaned up the electrical components because they were submerged,” he said. “Some Chinese experts also are helping with the computer system of the powerhouse.”

Laos has built dozens of small and large dams along the Mekong River and its tributaries in its quest to become “the battery of Southeast Asia,” exporting the electricity they generate to other countries in the region.The country is preparing to build even more dams in the years ahead.

One more dam collapse in Laos reveals no dams built by the blood-sucking commie party-state or their families and friends are not up to the international standard. They enjoy pocketing huge commissions and neglect the quality of dams.

The dam owner will pay off state officials to coverup everything. Nothing new, move along.