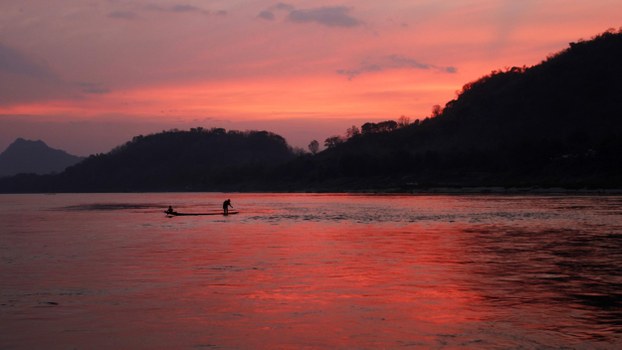 Men ride in a boat across the Mekong River in Luang Prabang, Laos, in a file photo.

China formally agreed on Thursday to provide the Mekong River Commission with year-round data on water flows on the Mekong, a move aimed at better monitoring and forecasting of floods and drought on the important regional waterway.

Signed by China’s Ministry of Water Resources and the Commission during a one-day virtual MRC Dialogue Partners Meeting, the agreement pledges full cooperation in information sharing, a commitment welcomed by Southeast Asian countries downstream that had formerly received data only during the region’s rainy season.

“This agreement is a landmark in the history of China-MRC cooperation,” An Pich Hatda—MRC Secretariat Chief Executive Officer—said at the signing, according to an Oct. 22 statement by the MRC, a regional grouping including Thailand, Cambodia, Laos, and Vietnam.

“The increased regulation of the [Mekong’s] basin and the opportunities and challenges it brings calls for greater data and information sharing, improved water release notifications, coordination of operations, and enhanced early warning systems,” Hatda said.

“China has also agreed to share urgent information on any unusual rise or fall in water levels and discharges, as well as other relevant information on factors that might lead to flooding in the lower reaches of the basin,” the MRC said.

Thursday’s agreement follows an assurance in August by China’s Prime Minister Le Keqiang that Beijing would move cooperation on the river to a “fast track” after a report earlier in the month by downstream countries called for increased sharing of information about dams along the waterway.

"This information is critically important to the countries downstream of the PRC on the Mekong who need that water for crops, for fish, for just life itself," said Stilwell, head of the bureau of East Asian and Pacific Affairs, in a briefing Secretary of State Mike Pompeo's upcoming Asia visit.

A series of 11 dams in China and two in Laos, along with others along the Mekong’s tributaries, have significantly altered the natural flow of the 3,100-mile river, which rises on the Tibetan Plateau and empties into the South China Sea in Vietnam.

The Mekong, the world’s 12th-longest river, stretches through six nations before draining into the South China Sea. Its waters flow from China past Myanmar, Laos, Thailand, Cambodia, and Vietnam, affecting more than 60 million people who depend on the river and its tributaries for food, transportation, and water.

Critics have faulted China’s dams on the river for contributing to recent droughts that have severely damaged agriculture and depleted fish stocks in neighboring countries.

In April, a U.S. study found that China had compounded the 2019 drought that devastated fishing and farming communities in other nations by restricting water flow from its dams.

Satellite measurements of “surface wetness” indicated that the Chinese dams in the Upper Mekong had “above-average” water levels when last year’s drought took place in Thailand and other countries downstream, Alan Basist, president of the research company Eyes on Earth Inc., told BenarNews, an RFA-affiliated online news service, at the time of the report’s release.

Pompeo said on Sept. 14 a new U.S.-Mekong Partnership launched on Sept. 11 will help combat transnational crimes and strengthen water security for partner countries where China’s manipulation of water flows on the river has exacerbated a drought.

The U.S. is “concerned about infrastructure-linked debt and the predatory and opaque business practices of Beijing’s state-owned actors, such as China Communications Construction Co. (CCCC),” Pompeo said in a statement.