Who Would Succeed Kim Jong Il?

Rumors are swirling over the reported ill health of the North Korean leader, but who would succeed him if they prove true is a mystery.
2008-09-15
Tweet 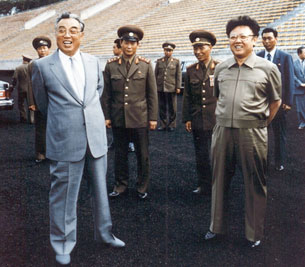 SEOUL—North Korean leader Kim Jong Il missed another key chance Monday to appear in public and kill widespread speculation that he’s gravely ill, with analysts saying there’s no clear indication who might take power if he were to become incapacitated or to die.

Kim, who succeeded his father Kim Il Sung in the only hereditary transfer of power in a Communist country, hasn’t appeared in public since Aug. 14. Speculation about his health surged after Kim failed to appear at huge celebrations marking the 60th anniversary of North Korea’s founding, which included a vast militia parade Sept. 9. On Sept. 15, he missed the Chuseok Thanksgiving holiday, celebrated in both North and South Korea.

“One cannot entirely eliminate the possibility of hereditary transfer of power to one of Kim Jong Il’s [three] sons,” North Korean studies professor Kim Young Hyun at Donguk University said in an interview.

“In case of a national emergency, it is likely that the National Defense Commission (NDC) will assume power, and then, if the situation improves, hereditary transfer of power may be considered at a later stage,” Kim said.

Kim became leader after his father died in 1994, and analysts say none of his three sons is ready to run the country—mired in economic crisis and prone to nuclear sabre-rattling.

...A relatively new pro-Chinese faction may be strong within the North Korean military."

“This power struggle could involve one of his sons, Kim Jong Nam or Kim Jong Chul, or elements of the military. Chang Sung Taek, Kim Jong Il’s brother-in-law, is not so powerful, and there would be very strong forces opposing his possible accession to the top spot,” Yang said. 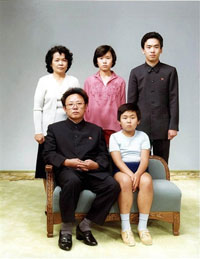 This photo taken 19 August 1981 and recently released shows North Korean leader Kim Jong-Il (sitting-L) sitting with his son, Jong-Nam (sitting-R), Kim's sister-in-law Sung Hye-Rang (L-top), Sung's daughter Lee Nam-Ok (C-top) and son Lee Il-Nam (R-top). Photo: AFP
Strong opposition to Kim Jong Chul was unlikely but “he is young,” Yang said. “The entire leadership of North Korea is over 60. Is it really possible to assume that a young man in his 20s could take on their senior responsibilities? Moreover, his patrons are weak.”

And if the military takes over, China’s influence could grow.

“But Cho is old and ailing, so it’s unlikely he would take the helm,” he said, adding that Supreme People’s Assembly President Kim Yong Nam would likely take precedence.

Kim’s former propaganda chief, Hwang Jang Yop, the highest-ranking North Korean ever to defect to South Korea, has meanwhile predicted that little will change in North Korea if and when Kim were to die or becoming unable to rule.

“China has basically been maintaining the North Korea regime on life support, and it will not abandon its ally, and will not allow chaos to erupt in North Korea,” he said.