A day after North Korea's bombardment of a South Korean island, China is asked to keep its wayward ally in check.
2010-11-24
Tweet 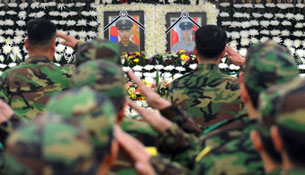 China came under pressure Wednesday to rein in North Korea a day after it launched an artillery attack on a South Korean border island that triggered the deployment of a U.S. aircraft carrier group off the tense peninsula's waters.

South Korea said the bombardment of Yeonpyeong island near the disputed inter-Korean Yellow Sea border left two civilians dead in addition to reports Tuesday that two marines were killed and 18 others injured.

Amid calls from South Koreans to take harsher measures against Pyongyang, President Lee Myung-Bak's administration moved to suspend promised flood aid to its northern neighbor and deploy more artillery on Yeonpyeong following the first shelling attack on civilians since the 1950-53 Korean War.

Seoul has already called off talks on reuniting families split since the war.

The two leaders agreed to hold joint military exercises as a first response to the deadly shelling.

The nuclear-powered USS George Washington, with 75 warplanes and a crew of more than 6,000, left a naval base south of Tokyo to join exercises with South Korea from Sunday to the following Wednesday, U.S. officials in Seoul said.

It was seen as a signal to China that American presence in the region would be stepped up unless Pyongyang behaves.

Chairman of the U.S. Joint Chiefs of Staff Admiral Mike Mullen, in interviews with U.S. television networks, said the exercises were long planned but meant to send a "very strong signal of deterrence."

"We're very focused on restraint, not letting this thing get out of control. The South Koreans so far have responded that way. Nobody wants this thing to turn into a conflict," he said.

Mullen said the United States was working with allies on ways to respond to the North Korean strike, but said, "It's very important for China to lead."

"The one country that has influence in Pyongyang is China, and so their leadership is absolutely critical," he said.

U.S. State Department spokesman Philip Crowley said China should use its influence to get North Korea to cease what he called its provocative behavior.

"China is pivotal to moving North Korea in a fundamentally different direction," he told reporters.

U.S. diplomats have conveyed that message to Chinese officials, he said.

But Crowley said the United States believed the North Korean attack was an isolated action.

"This was, in our view, a one-off, premeditated act," he said. "Without getting into intelligence matters, we don't see that North Korea is ... preparing for an extended military confrontation."

Japan's Prime Minister Naoto Kan also asked China to use its influence over North Korea as Tokyo hinted toughening of sanctions against Pyongyang.

"We should ask China, which has significant influence over North Korea, to make efforts to jointly restrain North Korean actions," Kan said as a Japanese cabinet task force was set up in response to Tuesday's attack.

"It has created extreme concerns in not only South Korea but also East Asia, including Japan," he said.

Australian Foreign Minister Kevin Rudd said it was "important now for China to bring all of its influence to bear on North Korea."

China is North Korea's main ally and biggest aid provider. It fears any regime collapse in its neighboring country could draw a flood of refugees.

In a statement late Wednesday, China's foreign ministry expressed regret for the "casualties and property losses" following the North Korean attack and asked both sides "to retain calm and restraint."

It urged North and South Korea to engage in talks as quickly as possible to avoid an escalation of tensions.

China "opposes any actions harmful to the peace and stability" of the Korean peninsula, the statement said.

China did not single out North Korea for condemnation like the other governments in the region.

Beijing's muted reaction has echoed its response when the North was blamed for torpedoing a South Korean warship in March, killing 46 sailors.

North Korea maintains that Seoul provoked the artillery attack by firing into the North's territory.

The firing came after North Korea's disclosure of an apparently operational uranium enrichment plant, a potential way of building a nuclear bomb.

It also comes as North Korea prepares for an eventual succession from Kim Jong Il to his youngest son Jong Un.

Mullen, the U.S. military's top officer, said the attack could be "tied we think to the succession of this young 27-year-old who's going to take over at some point in the future."