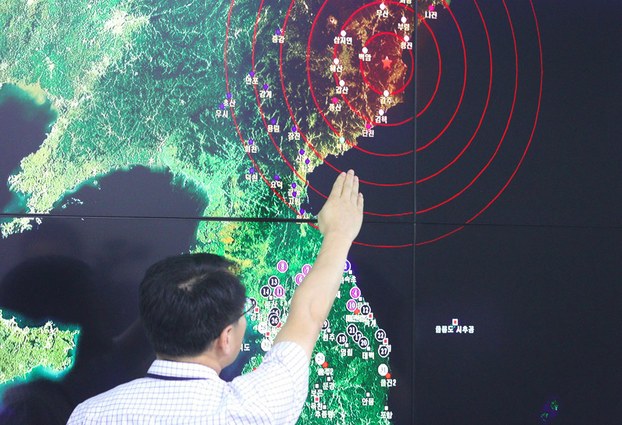 A South Korean official points to a map showing the epicenter seismic waves in North Korea, at the Korea Meteorological Administration in Seoul, Sept. 9, 2016.

North Korea announced on Friday it has conducted its fifth nuclear test, its largest to date, the official KCNA news agency said.

Washington quickly condemned the blast "in the strongest possible terms as a grave threat to regional security and to international peace and stability," the White House said in a statement released Friday morning.

"To be clear, the United States does not, and never will, accept North Korea as a nuclear state," U.S. President Barack Obama said in the Friday statement, calling the test a "flagrant violation of multiple U.N. Security Council resolutions."

"Today's test, North Korea's second this year, follows an unprecedented campaign of ballistic missile launches, which North Korea claims are intended to serve as delivery vehicles for nuclear weapons targeting the United States and our allies, the Republic of Korea and Japan," Obama said.

North Korea's actions have instead "served to isolate and impoverish its people through its relentless pursuit of nuclear weapons and ballistic missile capabilities," Obama said.

"Pyongyang has been making dangerous provocations, and has only focused on developing nuclear weapons and missiles. They must realize they will get nothing from such efforts," the agency quoted Cho as saying.

The test was indicated by a magnitude 5 earthquake detected near North Korea's Punggye-ri nuclear site in the country's northeastern region.

The nuclear test was the country's fifth in the past decade and the third under Kim Jong Un, who has drawn an ever tightening web of United Nations sanctions on his tiny economy, as well as unilateral punitive trade and financial measures by the United States, Japan and South Korea.

Some analysts are estimating that the force of Friday's blast was "more powerful than the bomb dropped on Hiroshima," the Reuters news agency said on Friday.

The New York Times reported from Seoul that President Park Geun-hye cut short a visit to Laos for a regional summit and condemned the test as showing the “fanatical recklessness of the Kim Jong Un regime.”

“The only thing the Kim Jong Un regime will get from this nuclear test will be more intensified sanctions from the international community and deeper isolation,” the newspaper quoted Park as saying. “This kind of provocation will only quicken its eventual self-destruction."

The Times quoted a statement from Ned Price, a U.S. National Security Council spokesman, as saying: “We are aware of seismic activity on the Korean Peninsula in the vicinity of a known North Korean nuclear test site.

We are monitoring and continuing to assess the situation in close coordination with our regional partners.”

Friday's nuclear test came hours after President Barack Obama wrapped up the final Asian tour of his presidency, a pair of summits in China and Laos that included talks with Chinese President Xi Jinping that underscored stark differences on how to deal with regional issues between Washington and Beijing, North Korea's only ally.

North Korea has unnerved its neighbors repeatedly this year with missile tests. The latest a launch of three ballistic missiles into waters between the Korean Peninsula and Japan has drawn a warning from the U.N. Security Council that the regime would face more sanctions if it persisted with the missile firings.