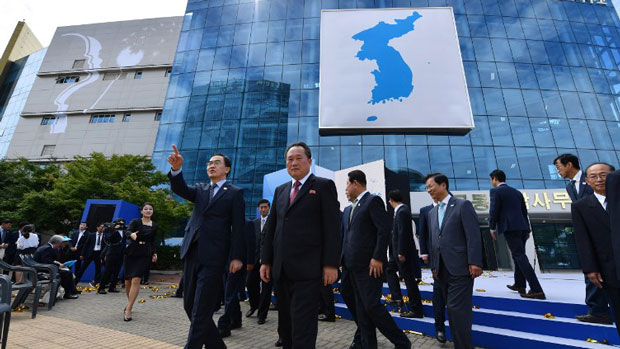 North Korea told South Korea on Friday pulled out of a border liaison office with the South, in a major setback for Seoul, following the imposition of the first new U.S. sanctions on the North since a U.S.-North Korea summit ended in stalemate last month.

The joint liaison office set up in September in the border city of Kaesong after a 2018 summit between leader Kim Jong Un and South Korea's President Moon Jae-in.

"The North's side pulled out after conveying to us that they are doing so on the instructions from a higher level, during a liaison officials' contact this morning," South Korea's Vice Unification Minister Chun Hae-sung told a briefing, according to Reuters news agency.

Reuters quoted Chun as saying South Korea regrets the decision and seeks a swift normalization of the arrangement, set up as a regular channel of communication to ease hostility between the rival Koreas.

The two leaders abruptly ended their summit when they could not agree on sanctions relief or the pace of North Korean denuclearization.

U.S. and international sanctions are aimed at depriving North Korea of funds that could be channeled into its nuclear program.

Chad O'Carroll, an analyst and chief executive of the Korea Risk Group, tweeted that "North Korea's pull-out Friday from the Kaesong Liason Office has been on cards since Hanoi, given recent no-shows there."

Pyongyang was sending the message that "Seoul has insufficient influence on the U.S.-DPRK relationship" and "What's point of inter-Korean talks when sanctions prevent practical cooperation?" he wrote on Twitter.

On Friday, however, Trump tweeted that he has reversed his administration's decision to slap new sanctions on North Korea, taking Treasury officials by surprise, according to U.S. media reports.

"It was announced today by the U.S. Treasury that additional large scale Sanctions would be added to those already existing Sanctions on North Korea," Trump wrote from his private club in Palm Beach.

"I have today ordered the withdrawal of those additional Sanctions!" he wrote, without clarifying which economic strictures he was referring to.

The Associated Press quoted White House press secretary Sarah Sanders as saying in a statement Friday that Trump "likes Chairman Kim and he doesn't think these sanctions will be necessary."