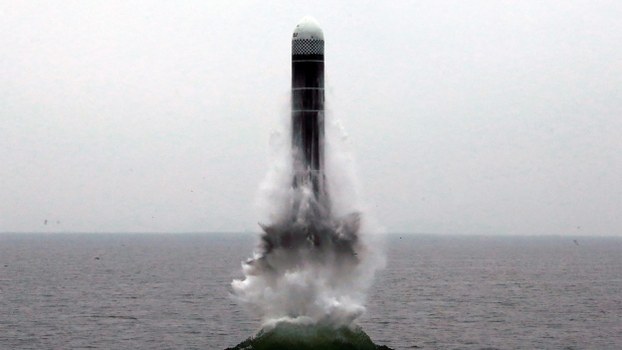 This picture taken on the morning of October 2, 2019 and released by North Korea's official Korean Central News Agency (KCNA) on October 3, 2019 shows the test-firing of "the new-type SLBM Pukguksong-3".

North Korean trade workers who often travel into and out of the isolated country say they are not falling for propaganda reporting about Pyongyang’s recent test of a new submarine-launched ballistic missile (SLBM).

The test of the Pukguksong-3 occurred Wednesday off the coast of Wonsan in the country’s southeast.

“The successful new-type SLBM test-firing comes to be of great significance as it ushered in a new phase in containing the outside forces’ threat to the DPRK and further bolstering its military muscle for self-defense,” the state-run Korean Central News Agency (KCNA) said Thursday.

While local news reports say that the test amounted to a warning to hostile powers like the U.S., the trade workers say they realize that North Korea’s military “might” is no match for the U.S., and the test is a return to the brinkmanship strategy of repeated provocative behavior in return for concessions.

“Propaganda media outlets, including KCNA and [the state-run] Rodong Shinmun [newspaper] say every day that a new type of missile, called the Pukguksong-3 was successfully launched on the 2nd,” said a trade worker from North Pyongan province in an interview with RFA’s Korean Service Friday.

“They say it is an immortal achievement and they are standing up to threats from outside,” said the source.

The source said that following the launch, authorities held a special lecture for trade workers in part to commemorate the upcoming anniversary of the foundation of the Korean Workers’ Party on October 10. But the topic of the lecture was the test of the SLBM.

“They stressed that the launch was not just to show off, but it was a warning to the U.S. and other hostile forces that continue to impose economic sanctions on North Korea,” said the source.

“The speaker said these hostile forces are threatening us by saying we must first give up our nuclear missiles and weapons before they lift economic sanctions, so we must strengthen our national defense to keep our national dignity and bring happiness to our people,” the source said.

The trade worker added that the speaker was trying to promote ideological unity in the name of preserving the continuity of the regime and the country.

“[The speaker] said if the national power is weak, the Socialist Korea will collapse,” said the source.

“But we trade workers frequently travel in and out of the country and know about the [actual] situation in the rest of the world. Trade workers are expressing skepticism about the tired propaganda,” said the source.

“Some are saying that the highest dignity’s strategy is not to preserve the happiness of the people,” said the source, using a respectful official term to refer to Supreme Leader Kim Jong Un.

“It’s really to provoke the U.S. and the international community to start up the third North Korea-U.S. summit and to protect [and further legitimize] the regime,” added the source.

Kim Jong Un met with U.S. President Donald Trump to discuss denuclearization and sanctions relief in June 2018 in Singapore and again in February 2019 in Hanoi, but very little progress on either front was made in either summit, with the second summit shut down prematurely in what is widely considered a failure for both leaders.

A North Korean trade representative in Dandong, China, a city along the border with North Korea, said the high frequency of tests since the second summit is an indication that the regime is desperate.

“This year, the authorities have done missile tests like 10 times. This can be interpreted as a sign of uneasiness over the highest dignity’s current predicament,” said the second source.

“As economic sanctions by the U.S. and the international community continue, North Korea’s economy has been paralyzed and people are griping that the system isn’t working. As their living standards are reaching a low point, [their dissatisfaction] is at a critical level,” the second source said.

The source emphasized the importance of public sentiment to the regime, saying that unhappy people might be a huge threat.

“Public sentiment in our country has never been this bad. We have been through more difficult times in the past, much worse than now, but the level of awareness of residents is a lot higher these days,” the second source said.

“Authorities have been disingenuously saber-rattling against the U.S. for decades,” the second source said, implying that the public sees through the regime’s strategy.

“So, public sentiment is on the verge of exploding,” the second source added.

The second source explained that the regime’s only chance to quell the downturn in public sentiment would be to negotiate for sanctions relief.

“The highest dignity has to be sincere in his talks with the U.S. and come up with plans to lift economic sanctions. It is just frustrating to see that the highest dignity, who is anxious to maintain the regime, is provoking the US with missile launches every day after day,” said the second source.

“I’m worried about the nation’s prospects because the highest dignity’s strategy will not work when dealing with the powerful U.S. and our economy will continue to tank.”

Following Wednesday’s weapons test, representatives of North Korea and the United States met in Sweden for working-level talks. Those talks were abruptly broken off Saturday by Pyongyang, citing Washington’s inflexibility.