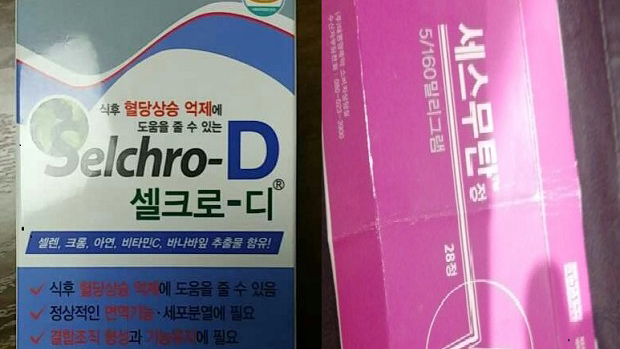 South Korean medicines that North Koreans have asked merchants to find for them.
RFA

Prolonged U.N. and U.S. sanctions are making medicines produced in certain foreign countries scarce in North Korea, to the point that even privileged party officials are having difficulty buying needed drugs, sources say.

Dubbed “U.N. medicine” by the locals, the medicines’ unavailability is affecting patients in desperate need of treatment, even threatening their lives.

An ethnic Chinese merchant living in Pyongyang told RFA’s Korean Service on Tuesday that finding the medicines in local markets is becoming harder and harder as sanctions drag on.

The sanctions, aimed at depriving the regime of resources that could be funneled into its nuclear program prevent the importation of certain goods and technology.

“In North Korea, even if a patient is fortunate enough to be treated at a well-known hospital in Pyongyang or other cities, the patient must still buy medicines for personal use at local markets,” said the merchant.

“Because U.N. medicine is in short supply these days, even the higher ups are resorting to using untested Chinese-made drugs,” the merchant said.

The merchant said that U.N. medicines have perceived advantages over their Chinese counterparts.

“U.N. medicines are mainly manufactured in Western countries or in South Korea. They are highly effective and are the most trusted by North Koreans because they have no side effects,” said the merchant.

“But they don’t trust Chinese medicines, especially those that require long-term use, such as those for high blood pressure or diabetes,” the merchant said.

Patients with means or privilege are looking elsewhere to procure medicine of superior quality.

A drugstore owner in Dandong, China said that demand for South Korean medicine is high, but supplies are difficult to get a hold of.

“An increasing number of North Korean trade workers and ethnic Chinese merchants come [to my store] asking if they can buy South Korean medicine, but South Korean blood pressure and diabetes medicines require a prescription there. I can’t get all the medicines [the traders and merchants] want,” said the drugstore owner.

A member of a South Korean religious group that has been sending medicine to North Korea for charity echoed the drugstore owner, saying that the South Korean prescription system is making it difficult to send quality medicine that North Koreans need.

“The South Korean government is talking a lot about humanitarian food aid to the North, but based on what I’ve seen, the more urgent need is for quality medical supplies and medicine. This is more important than food aid,” the religious group member said.