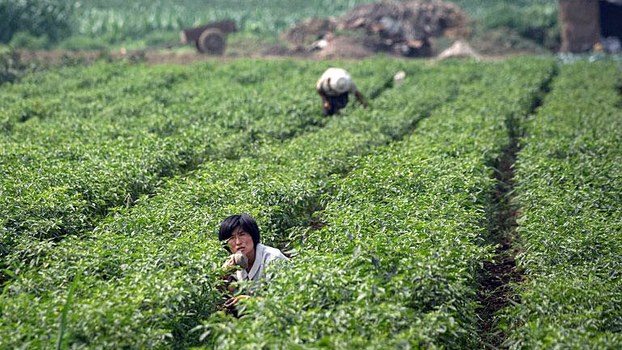 North Korean farm workers tend to a field on the outskirts of the capital Pyongyang, July 12, 2016.

North Korea has recently admitted that its agricultural sector has faced drawbacks over the past year, a rare public acknowledgement of failure that is further confirmation that Kim Jong Un’s approach to leading the country is very different from that of his late father or grandfather, experts say.

North Korean Premier Pak Pong Ju made the admission Thursday at a meeting of agricultural specialists in Pyongyang. He was quoted in an English-language KCNA report as saying there were “drawbacks made by some farms and units in the past.”

“[Some have] failed to conduct seed production and management in a responsible way and also fell short of doing proper strain distribution in line with climatic conditions and characteristics of fields,” Pak said.

Pak also said that the agricultural sector needs to produce enough grain to reach the goals laid out in a five-year plan for development that is scheduled to end in 2020.

Since Kim Jong Un took power in 2011, the government has been more forthcoming in admitting its failures, experts have noted.

Robert Manning, a senior fellow at the Atlantic Council, told RFA’s Korean Service Thursday that Kim Jong Un is a very different person than his father and grandfather.

Manning also said that sometimes North Korea will admit to failure publicly when they are trying to fire someone in a high office, but did not know for sure if this is the case this time.

Manning was critical of the regime for its willingness to devote resources for its missile program and for luxury goods, and expressed pessimism at the notion that food aid for North Korea could be used as a bargaining chip in possible future negotiations with the regime.

“If [Kim] wanted to feed people, he could,” said Manning. “But he’s not going to offer any concession for food aid.”

He also pointed out that the agricultural sector isn’t the only area where North Korea is failing; the market system is also broken. Manning recommended that the U.S. and South Korea should float to Pyongyang the idea of joining the IMF and WTO to get international aid for the country’s development.

“There are a few different things we’ve been working on over the years,” he said, adding, “One of them is rice cultivation and the introduction of plastic trays.”

“That has been a very successful project that has raised [yields] 15 to 20% in some farms.”

But farm aid is not enough to combat the looming hunger crisis, according to humanitarian groups.

Channel NewsAsia reported that the UN’s Food and Agriculture Organization said this month that North Korea needs to import an estimated 641,000 tons of food in 2019. This is a huge increase over the 456,000 tons the North imported this year.

The U.N.’s World Food Programme said in October that over 10 million North Koreans, about 40% of the population, were “undernourished and in need of support, with one in five children stunted due to chronic malnutrition.”