North Korea ‘Mobilizes’ Workers, Then Collects Money When Work is Cancelled Because of Coronavirus 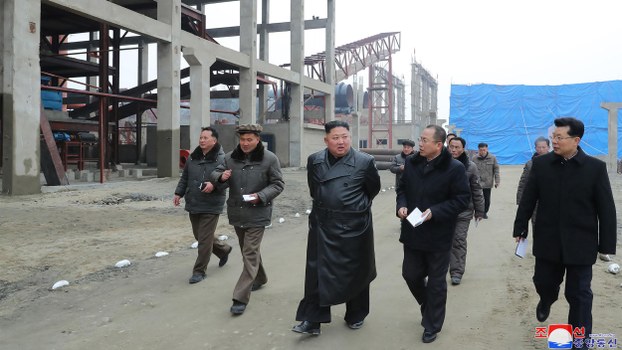 Authorities in North Korea are making preparations to mobilize citizens for major state projects that require large amounts of labor, but sources say that the government has chosen to do this during the novel coronavirus crisis to encourage citizens to donate money instead.

Nearly all state projects are built through citizen labor, and whether it’s for construction, farming, or sprucing up the village for a visit from Kim Jong Un, citizens can expect to be tapped to toil often.

But this year is different. The novel coronavirus has caused havoc in neighboring China and also hit South Korea. North Korea has yet to officially report a single confirmed case of COVID-19, the disease caused by the virus, but state media recently reported some 7,000 of its citizens were being closely monitored.

The country has taken many preventative measures, including quarantining entire counties near the Chinese border and canceling major events that would bring large numbers of citizens in close proximity.

During this time, collective projects have been halted, meaning they are behind schedule. The government is trying to mobilize an extraordinarily large group of workers to get them back on track, but sources say the call for extra workers is really an attempt to get most of them to donate funds in order to be exempt from labor.

“The authorities have banned all mass gatherings and started sanitation and quarantine projects due to the coronavirus, and now they have begun to prepare a mobilization plan for state-run construction work,” said a resident of North Hamgyong province on Monday.

“There will be a major mobilization if the coronavirus crisis calms down,” the source said.

According to the source, the Central Committee of the Korean Workers’ Party ordered companies and provincial agencies to participate in the mobilization.

“The state and province run construction projects, which have been suspended because of the coronavirus crisis are expected to resume in large numbers,” said the source.

“Under the direction of the committee, each factory and People’s Unit have begun choosing workers to be mobilized,” the source said.

“They are supposed to work for a three month period, but if enough workers are not organized in time, many will have to continue working on the construction site for six months to a year. So everyone wants to avoid mobilization somehow,” the source added.

Certain labor-intensive projects are extremely unpopular, according to the source.

“In particular, major construction projects such as the Samjiyon city construction and Tanchon hydroelectric power plant require constant hard labor, so everyone is trying to avoid them.”

Samjiyon city is located in a major government-backed tourist zone, the second phase of which was completed last December. The city was unveiled to the public as a “socialist utopia,” while Tanchon is an enormous hydropower project with dams on several rivers as well as waterway tunnels spanning hundreds of kilometers.

Citizens averse to backbreaking labor required to complete either project are thus given an alternative: put up cash.

“Officials are openly asking people who can’t go to these sites to pay cash instead,” said the source, adding that North Hamgyong’s largest city Chongjin, citizens are expected to pay between 100 and 300 Chinese yuan (U.S. $14 – 44).

Another North Hamgyong resident told RFA that authorities spread the word about the mobilization projects by making announcements at People’s Unit meetings.

“They openly demanded cash. They said if anyone can’t participate in mobilization, they should donate money,” the second source said.

The second source said it seemed suspicious that the government would want to mobilize after just recently banning organized gatherings, especially because anyone mobilized would be expected to miss work until the coronavirus crisis ends.

“They have set it up so that you have to pay a certain amount of money for however many days, weeks, months or years of work you miss,” the second source said.

The blatant cash grab is angering citizens, according to the second source.

“The people are having a hard time making ends meet with the coronavirus crisis and sanctions on North Korea, so they are enraged that the authorities are using mobilization as an excuse to collect money from us.”

As of Friday morning, there were 6593 confirmed cases of the virus in South Korea with 43 deaths in South Korea, ground zero for the largest COVID-19 outbreak outside of China.

In his letter, Kim expressed his concern over Moon’s health and expressed his regret that he was currently powerless to do anything to help South Korea at this time.