Malaysia May Kick Out North Korean Diplomats Amid Assassination Row 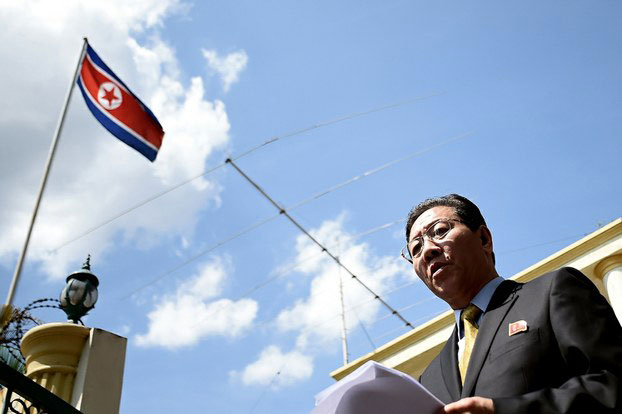 A proposal to declare Ambassador Kang Chol and second secretary Hyon Kwang Song “persona non grata” has been put forth in high government circles and is under consideration, the sources said, speaking on condition their names not be revealed.

Kang Chol openly criticized Malaysian investigations into the death of Kim Jong Nam while Hyong Kwang Song is wanted by police for questioning over the murder at a Malaysian airport outside Kuala Lumpur on Feb. 13.

Two reasons have been cited for the proposed expulsion of the two North Korean diplomats –possible involvement in the assassination of Kim Jong Nam and revelations that North Korea was making Malaysia a base for arms dealing in violation of international sanctions – the sources said.

“No final decision yet, but we are discussing with the Foreign Ministry,” one source told BenarNews.

Kim Jong Nam died within 15 to 20 minutes after VX, a lethal, internationally banned nerve agent, was smeared on his face by two women, according to findings.

Malaysia is among a small list of countries with close relations with the hardline communist regime in Pyongyang, which is under global sanctions over its illegal nuclear weapons drives and ballistic missile launches, the latest of which took place on Feb. 12.

Those ties have been shaken by the killing of Kim Jong Nam on Malaysian soil, with Kuala Lumpur already recalling its ambassador to Pyongyang and canceling visa-free entry to Malaysia for North Korean nationals beginning Monday.

Earlier this week, Malaysian authorities said they were aware of two North-Korean controlled companies that, according to a Reuters report, were using a Malaysian front company to sell battlefield radio equipment in violation of U.N. sanctions.

The two companies were being “struck-off” or removed from a registry of business entities in the country, Malaysia’s Inspector General of Police Khalid Abu Bakar said in a statement.

On Friday, Malaysia rebutted the latest attempt by North Korea to reject its findings that the deadly XV nerve agent had been used in the killing.

“The ministry strongly condemns the use of such a chemical weapon by anyone, anywhere and under any circumstances. Its use at a public place could have endangered the general public,” the foreign ministry said in a statement.

At a press conference Deputy Prime Minister Ahmad Zahid Hamidi issued an apparent warning to Ambassador Kang Chol, who twice lashed out against Malaysian officials for their handling of the investigation.

“If the rebukes keep coming from the ambassador, he will pay a heavy price,” Zahid said. “As an ambassador, although the script is coming from a source that only he knows, he must respect our law, ethics and culture here. Diplomacy must be respected.”

Malaysian police said they are seeking seven North Korean nationals in connection with the killing, but four of them have returned to North Korea, while three are still in Malaysia, including second secretary Hyon.

Legal experts warned that taking action against diplomats could have serious consequences.

Malaysia has two options, lawyer Mohamed Haniff Khatri told BenarNews: asking North Korea to cancel the second secretary’s immunity so he can be arrested, or declaring him persona non grata – thereby kicking him out of the country.

“Any action taken will invite aggressive reaction from the North Korea. Malaysia, however, will face a negative perception from its own citizens and international community if it fails to seek justice for the deceased and his family,” he said.

“In other words, will Malaysia want to be labeled as a country willing to ignore justice because of its fear against North Korea?”

Yusmadi Yusuf, another legal expert, said the persona non grata tactic should be the last option.

“At this stage it is not advisable. It will create further tension," he said.

“This is a crime issue, not a diplomatic issue,” he said. “We have to find a middle path to communicate better and address their concern. …We have not exhausted our diplomatic engagement with them.”

Meanwhile, Malaysian police on Friday issued an arrest warrant for North Korean airline Air Koryo employee Kim Uk Il, 37, one of three North Korean nationals wanted in connection with the crime who is still thought to be in Malaysia.

It also released and deported Ri Jong Chol, the only North Korean in custody to date, citing lack of evidence in the murder case along with immigration violations.

On Wednesday, two Southeast Asian women who allegedly smeared the toxin on Kim’s face were charged with murder.

North Korea sent a special delegation to Kuala Lumpur on Tuesday seeking to claim the body it has never identified as Kim Jong Nam and repair fraying bilateral ties.

Malaysia has so far refused to hand over the victim’s body. On Feb. 19, Malaysian police said they were giving Kim Jong Nam’s next of kin two weeks to come forward and positively identify the body, a time frame that expires on Sunday.