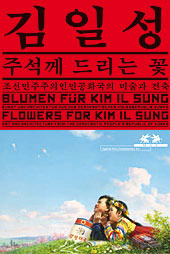 A poster for "Flowers for Kim Il Sung," on exhibit at Vienna's MAK Museum for Applied Arts.
Yonhap News

VIENNA—Government officials and Austrians of Korean descent have lashed out at an exhibition of North Korean propaganda art at a Viennese museum featuring works glorifying the late North Korean leader Kim Il Sung.

"It is impossible to comprehend or justify idolizing [Kim Il Sung and Kim Jong Il], their cult of personality," said Park Jong Beom, chairman of the Association of Korean Austrians after the exhibition opened May 19.

"There is a problem with the artistic value of these exhibits. As chairman of the Association of Korean-Austrians, I plan on visiting the exhibition to openly express my indignation," said Park, who also sent a protest letter to Vienna's MAK Museum for Applied Arts.

In the letter, Park and other members said genuine art is "unimaginable" in North Korea, and expressed "indignation over displaying propaganda materials aimed at embellishing North Korea’s dictatorial system, under the name of an art exhibition."

Park said his group is concerned that images of North Koreans beaming with joy as they sit around Kim Il Sung, which will contain no textual explanation at the "Flowers for Kim Il Sung" exhibition, will distort people's impression of the isolated Stalinist state.

Park said he is preparing a protest at the museum by members of his group and of the Austria chapter of South Korea's National Unification Advisory Council.

"We will underscore the misguiding message conveyed by this exhibition in the Austrian press," said Park, who has already written to major Austrian media questioning the reasons for the exhibition and pointing to concerns over transparency.

The museum has defended the exhibition, saying it is part of its mission to bring the strange and the unfamiliar to people's attention.

MAK museum chief Peter Noever has denied in media interviews that the exhibition is in any way an endorsement of the North Korean regime.

He said that the reason no written descriptions were placed on the walls next to the exhibits was to eliminate the political message associated with the artworks on display.

The exhibition has also been given the cold shoulder by government officials.

Daniel Kapp, of the Austrian Federal Ministry of Finance, said his department had turned down requests for funding for the project.

"The position of our ministry is that Austrian taxpayers should not be made liable for propaganda art honoring a dictator," Kapp said.

However, Ruediger Frank, an expert on the Korean peninsula at the University of Vienna, said that most Austrians are firm supporters of democracy and democratic values.

Frank said he believes the organizers of the exhibition, which runs until September, want to boost dialogue and communication about North Korea.

"They share the same reservations about the North Korean system like all people who value individuality, freedom, democracy," Frank said by e-mail.

"They also understand that ignoring a system like North Korea will not help to solve the many problems in and around North Korea," he said.

The exhibition comprises 100 items, including water colors, posters, and large ink and oil paintings, most of which date from the last decade.

"It is time to bring these works, together with their contexts, closer to a Western audience, and provide a well-founded base for knowledge about art in [North Korea]," the museum said in a statement on its Web site.

"The idea is to set in motion perception and reflection processes that operate beyond familiar patterns," it said.

Original reporting in Korean by Hee Jung Yang. Korean service director: Bong Park. Translated from the Korean by Grigore Scarlatoiu. Written for the Web in English by Luisetta Mudie. Edited by Sarah Jackson-Han.