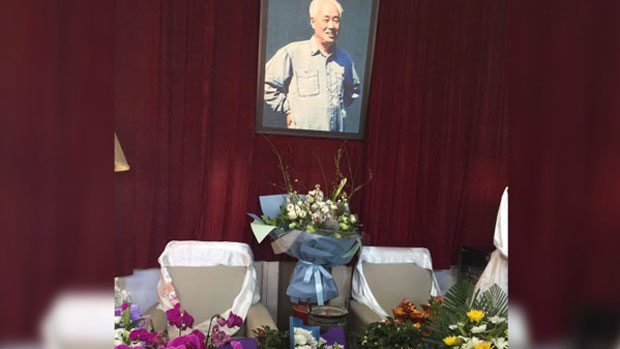 A memorial to Chinese Premier Zhao Ziyang, who was ousted for sympathizing with the student-led mass protests in 1989, on the 14th anniversary of his death under house arrest, Jan. 17, 2019.
Photo courtesy of an RFA listener.

Almost three decades after the Tiananmen massacre ended the 1989 democracy movement and froze political reform in China, Beijing police on Thursday stepped up security on the anniversary of the death of premier Zhao Ziyang, ousted for sympathising with the student-led mass protests.Fourteen years after his death under house arrest imposed following his fall from power, Zhao's family have repeatedly called for his posthumous rehabilitation, and for his remains to be laid to rest.Yet there was a strong police presence outside Zhao's family home on Beijing's Fuqiang Alley, and many who had wanted to pay their respects at the home and write in the family condolence book, were unable to do so."There were ... some people who couldn't make it, for example, the Tiananmen Mothers, so they sent wreaths and so on using florists," Zhao's son-in-law Wang Zhihua told RFA, in a reference to a campaign group for the families of those who died when the People's Liberation Army (PLA) used tanks and machine guns to clear the capital of protesters and hunger strikers on the night of June 3, 1989."I don't know why security is so tight this year ... nobody's going to explain the reason to us, so there's not much point in thinking about it," he said. "The best history is that which is written by the people."Veteran political journalist Gao Yu said via her Twitter account that she had been warned not to go to Zhao's house to pay her respects, and that she had been detained as she set out to mark the anniversary of his death privately on Wednesday with a few friends.Beijing-based housing rights activist Ni Yulan said she was unable to attend, as she was under police surveillance at her home."I saw that a few petitioners went today," Ni said. "They reported back that they were detained and taken down to the local police station.""Security was very tight today, and there were many times more officers than previously, with police vehicles everywhere," she said. "There were also plainclothes [state security] police."Zhao's daughter Wang Yanan said the ruling Chinese Communist Party has yet to approve the family's application for a burial plot for Zhao, a liberal-minded and well-loved leader who rose to the top of the ruling party at the 13th Party Congress in 1987."There are reasons for that; chief among them is the overall political climate," Wang Yanan said. "The government has its own concerns, and we have ours."2019 brings sensitive anniversaries

But she said she still hopes for her father's good name to be restored. Zhao's name rarely appears in the official record, although he has a loyal following of former officials seeking to rehabilitate him as a figurehead of the reform era that began in 1979."I always have some kind of hope or confidence that this will happen," she said. "But reality is another matter."In a conclusive break with the reformist thinking of the 1980s, China's current supreme leader Xi Jinping is now serving an indefinite term as president following constitutional changes nodded through in March 2018 by China's rubber-stamp parliament, the National People's Congress (NPC).Beijing-based constitutional affairs scholar Yu Meisun, who served as a top aide in China's cabinet, the State Council, during the 1980s, said Zhao had been very keen on the rule of law."He led us during the 1980s, and I think he did some very meaningful work," Yu said. "Zhao Ziyang set great store by economic legislation, by legal measures, as a way of ensuring the smooth progress of reform and opening up.""He was very enlightened, and had researched reforms and opening up in great depth."Beijing rights activist Hu Jia said the additional security likely came ahead of the 30th anniversary of the Tiananmen crackdown."This is an important point in history, coinciding as it does with the 70th anniversary of Communist Party rule," Hu said. "Xi Jinping can't afford there to be unrest of any kind, especially not linked to June 4, as it proves the illegitimacy of Communist Party rule.""That's why he has to eliminate this sort of thing to the greatest extent possible," he said.Author Ma Bo agreed."They are probably afraid ... so they step up controls on ordinary people," he said, adding that calls on the Chinese leadership to overturn the historical verdict of "counterrevolutionary rebellion" on the 1989 democracy movement were unlikely to be heeded."They're never going to reappraise it," Ma said. "You're not even allowed to talk about it. They only have one position, and that is that the Communist Party's grip on power must be maintained as a one-party dictatorship."Reported by Ng Yik-tung and Sing Man for RFA's Cantonese Service, and by Gao Feng for the Mandarin Service. Translated and edited by Luisetta Mudie.

Chinese communists - they are very afraid of the people knowing the truth. The truth is that they rule by force, since free and fair elections would remove the communists from office.