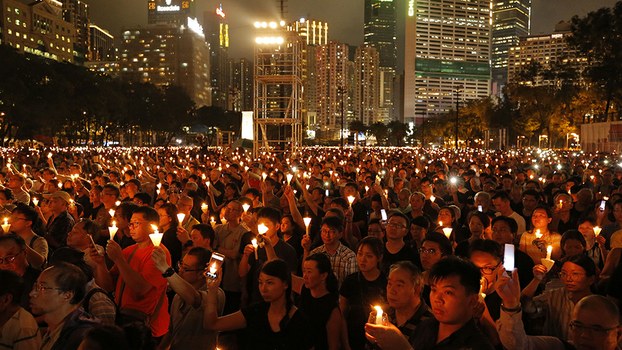 Thousands attend a candlelight vigil for victims of the Chinese government's military crackdown three decades ago on protesters in Beijing's Tiananmen Square at Victoria Park in Hong Kong, June 4, 2019.

Nearly 200,000 people gathered in Hong Kong's Victoria Park on Tuesday to commemorate the 30th anniversary of the massacre by the People's Liberation Army (PLA) that crushed the 1989 student-led democracy movement in Beijing, according to the organizers.

In the only public memorial of the massacre on Chinese soil, the crowd chanted slogans calling for a reappraisal of the ruling Chinese Communist Party's official verdict of "counterrevolutionary rebellion" that it says justified the decision to send in tanks and order PLA soldiers to fire on unarmed civilians.

Organizers put the number of participants at around 180,000. Aerial photos of the vigil in Hong Kong's Victoria Park showed the crowd spilling over onto adjacent lawns after filling six football pitches, making it the biggest gathering since the Umbrella Movement protests in Hong Kong in 2014.

"Justice will triumph!" the crowd chanted, as well as slogans opposing government plans to allow renditions of alleged criminal suspects to face charges in mainland China, in a legal amendment that has sparked widespread fear that the city will lose its status as a separate legal jurisdiction, and that rights activists and dissidents in the city could be targeted by Beijing for actions deemed illegal across the internal border.

"Oppose the evil send-to-China law," the crowd chanted, using a pun on the Cantonese for "final send-off," meaning a funeral.

Rescue workers were called to the scene to aid in removing it, according to the Apple Daily newspaper.

The protest drew people of all ages in Hong Kong.

"It’s prohibited to talk about June 4th in mainland China. People there are brainwashed and don’t know what June 4 is," high school student Lai Nga-ying told RFA's Cantonese Service. "I came here not only because I want more people to know the truth about what happened on that day, and remember it forever."

Liang Qiben, 84, told RFA "I hope that a new China will overturn the verdict on June 4, and that there will be democracy and freedom. It would be great if [mainland China] could be the same as Hong Kong."

Hong Kong lawmaker and rights lawyer Albert Ho, head of the Hong Kong Alliance in Support of Patriotic Democratic Movements of China, which organizes the annual vigils, told the crowd in Victoria Park that the suppression of dissent and human rights has only intensified in mainland China in recent years.

And he warned that Hong Kong, which was promised the continuation of its traditional rights and freedoms for 50 years after the 1997 handover, is already feeling a shift towards a more authoritarian form of government.

"I read the [amended] Fugitive Offenders Ordinance today, and the thing that hurt the most was seeing high-ranking Hong Kong officials lying through their teeth, spouting all of this wide-eyed nonsense saying it is needed to close a 'loophole,'" Ho said.

Organizers had predicted that public anger over the planned renditions law would swell the numbers at the vigil on Tuesday, and numbers seemed to be far greater than in the past two years, observers said.

"This Fugitive Offenders Ordinance is totally unacceptable," one participant at the vigil told RFA. "This is absolutely going to damage human rights and freedom for Hong Kong citizens, because we won't feel safe."

"Hong Kong is no longer operating under 'one country, two systems: it's just one country, one system now."

Another participant said they had turned out with a view to showing the government the extent of their anger over the renditions law.

"The main aim is to get them to withdraw it," the second participant said. "There is no real need for this amendment."

Judges, lawyers, opposition politicians, rights activists, business groups and journalists have all expressed vocal opposition to the plan, which will allow China to request the extradition of an alleged suspect from Hong Kong based on the standards of evidence that currently apply in its own courts.

The most likely jurisdiction to use the proposed provision is mainland China, which currently has no formal extradition treaty with Hong Kong.

Opposition groups are planning a demonstration against the proposed amendments on June 9.

The Hong Kong Journalists Association (HKJA) said last week that the planned changes would be "a sword hanging over the head[s]" of the city's journalists, who could easily be targeted by Chinese officials for prosecution if they write something that displeases the ruling party.

The separation of legal jurisdictions under the “one country, two systems” framework governing the 1997 handover to China had worked until now to protect the human rights of Hong Kong residents.

Grass-roots activists in Hong Kong also worry that the amendments, if passed, could have a chilling effect on working-class activism in the city, including the labor movement, while business groups warn it could undermine the city's status as a separate trading entity under international agreements.

Diplomats and lawmakers from several countries have also expressed fears that their nationals could run afoul of the legal changes, and be transferred to mainland China where there would be scant protection for their human rights.

"Hong Kong is a very free society," Lam said in response to a media question on the 30th anniversary. "We uphold and safeguard the rights and freedoms of individuals in Hong Kong."

"So today, if there are public gatherings to express their views and feelings on a particular historic incident, we fully respect those views," she said.

But she said fears that the Hong Kong government would never turn down an extradition request from the ruling Chinese Communist Party were "unfounded."

"There are very detailed provisions in the law that will not allow that sort of situation to happen," Lam said.

Did the 180,000 people turn out for the vigil of The Nanjing Massacre victims?