Taiwan's President Pushes For UN Membership During US Trip 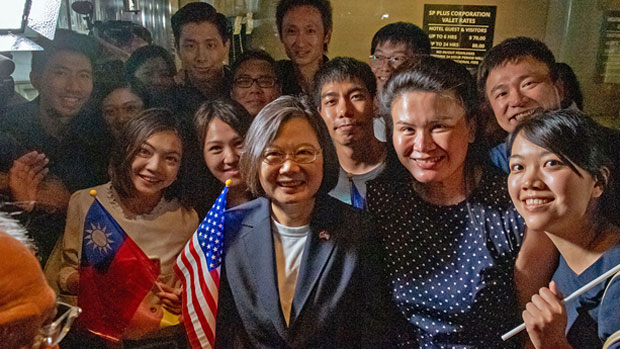 Taiwan president Tsai Ing-wen has renewed her support for the democratic island's bid to join the United Nations in its own right, pushing back against efforts by China to isolate the country internationally.

Tsai told a group of permanent U.N. representatives in New York on Thursday that the island, which is still formally governed as the Republic of China established in 1911 with the fall of the Qing Dynasty (1688-1911), would never give in to Beijing's claim that it is an "inalienable part of Chinese territory," nor give up its bid to join the U.N.

"Taiwan will never succumb to any threats [from Beijing], now or in the future," Tsai was quoted as saying in a statement from her presidential office. "Any obstacles will only strengthen Taiwan’s resolution to join the international community."

Taiwan's 23 million people have the right to take part in international affairs without "political interference," she said.

Tsai's arrival was marked by street fighting between her supporters and pro-Beijing demonstrators waving the flag of the People's Republic of China, which has never controlled the island.

The pro-China protesters chanted slogans and fought with Tsai's supporters, while one man was seen being detained and handcuffed by police, media footage of the incident showed.

Tsai said pro-Beijing forces were also waging an "information war" to win voters over for their preferred candidates ahead of a presidential election in 2020.

"Part of the information war being waged against Taiwan involves them using their representatives via the media to create and disseminate fake news so as to cause division and conflict in Taiwan society," Tsai said.

"This is a huge threat to Taiwan's democracy," she warned. "We hope to put an effective system in place to protect ourselves from this information war using government policy and the law."

Tsai's comments at a reception for U.N. envoys from countries with whom Taiwan still has diplomatic ties, is spending four days on U.S. soil before heading to garner support among diplomatic allies in the Caribbean.

Taiwan’s leaders have typically been prohibited from making public appearances during transit stops in the U.S. since Washington switched its diplomatic allegiance to Beijing from Taipei in 1979.

Tsai’s trip came after the Pentagon said on Monday the U.S. State Department had approved the sale of the weapons requested by Taiwan, including 108 General Dynamics Corp M1A2T Abrams tanks and 250 Stinger missiles, which are manufactured by Raytheon.

China said on Friday it would impose sanctions on U.S. firms involved in the deal, saying it harmed China's sovereignty and national security.

Foreign ministry spokesman Geng Shuang said the deal was "a serious violation of international law and the basic norms governing international relations," as well as violating the ruling Chinese Communist Party's "one China" principle under which it claims Taiwan as part of China.

"To safeguard our national interests, China will impose sanctions on the U.S. enterprises involved in the above-mentioned arms sales to Taiwan," Geng told a regular news conference in Beijing.

Meanwhile, foreign minister Wang Yi warned that the U.S. should "not play with fire" on the question of Taiwan, and that  no foreign force could or should intervene to stop the "unification" of China and Taiwan.

"We urge the U.S. to fully recognize the gravity of the Taiwan question ... [and] not to play with fire on the question of Taiwan," Wang said via an interpreter.

Chinese Culture University professor Pang Chien-kuo said it was too early to say whether Tsai's U.S. trip would pay diplomatic dividends, but that Taiwan had to keep trying.

"We can't not make these trips, but the question is whether Tsai will do everything in her power to achieve a skillful breakthough," Pang said.

"Some people are wondering whether she will meet with Trump's family, as Trump Tower is in New York, even though she won't meet with the president himself."

"Or maybe with National Security Adviser John Bolton, who has already held a meeting with Taiwan's national security chief David Lee," he said. "We will have to pay close attention."

In a Jan. 2 speech titled "Letter to our Taiwan compatriots," Chinese President Xi Jinping said that Taiwan must be "unified" with China, and refused to rule out the use of military force to annex the island.

But Tsai has repeatedly said that Taiwan's 23 million population have no wish to give up their sovereignty.

It has never been controlled by the Chinese Communist Party, nor formed part of the People's Republic of China.

Reported by Wang Yun for RFA's Mandarin Service, and by Chung Kuang-cheng for the Cantonese Service. Translated and edited by Luisetta Mudie.